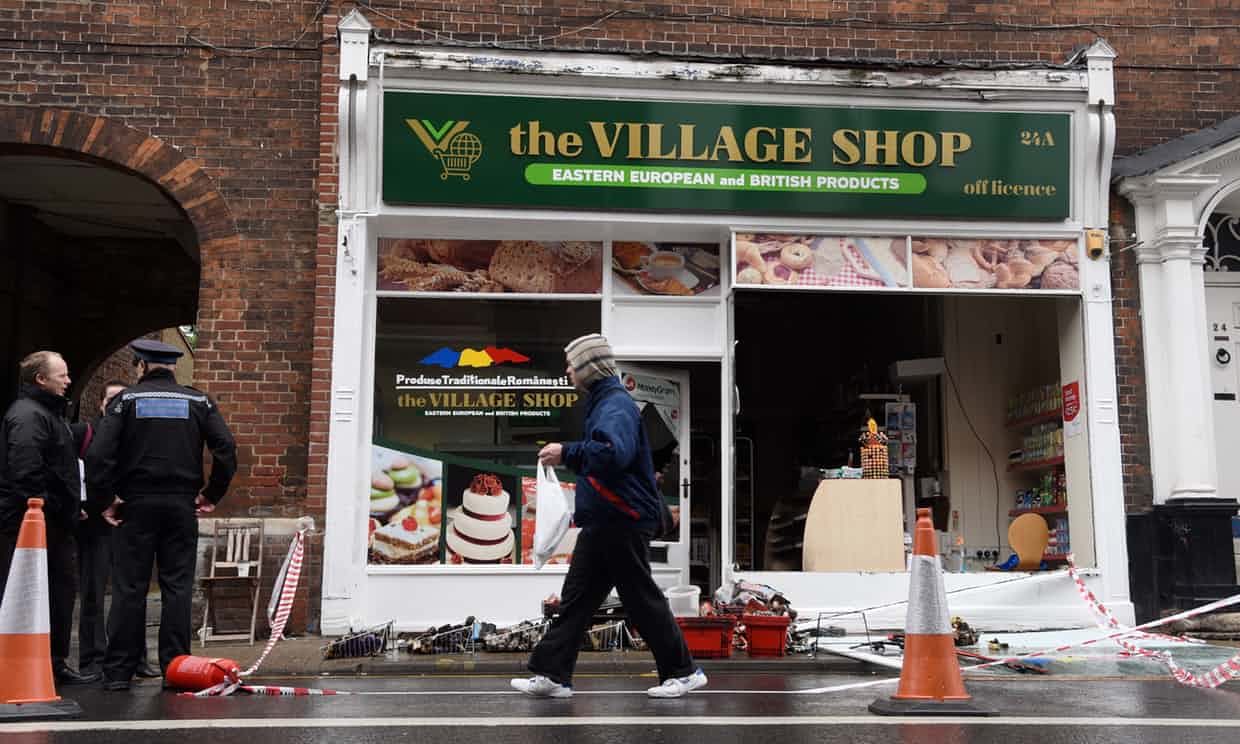 Father Ioan strolls the aisle of the Romanian Orthodox church in Redcliffe, Bristol chanting in Romanian, English and Church Slavonic while wafting a censer of incense among the faithful. By day, he works in construction; on Sundays, he tends the flock. Families and individuals come and go, among them Orvida, an IT worker who came for three months and stayed for six years; the paediatric surgeon who described himself as a “remain Eurosceptic”, although he didn’t have a vote; and Horatio, the former bank manager who found a job here as a care worker and runs his own business employing about 20 people.

Every Sunday, opposite the church, a bus bound for Bucharest waits for passengers. The journey to eastern Europe takes the best part of two days. But many just send cargo. Big boxes, bound together by thick tape and a prayer, are weighed and paid for, so that family can pick them up at the other end. Since Britain voted to leave the European Union, some eastern Europeans are now wondering if they should be hitching a ride. One man across the street, who declines to give his name, is waiting for a minivan, also going to Bucharest, that will take him home for good. He says life has become too stressful since the referendum.

At the coach, two young women whose boxes are being weighed have received worried calls from their families back home. “They heard news about a Romanian shop that has been broken into in some city in the UK, and vandalised,” one tells me. “And also about people being sworn at, told to go home, generally being treated badly.” The women have experienced none of this and have no intention of leaving. “No, I’m fine,” says one. “In Bristol it’s OK.”

The issue of immigration and immigrants dominated the EU referendum, with much of the focus on eastern Europeans who arrived following EU expansion in 2004. When the result came in, many of them felt the country they now called home had rejected them. A sharp increase in racial attacks was reported across the country. In the first week, London was averaging around three an hour; elsewhere, things were even worse. On Saturday 27 August, in Harlow, a 40-year-old Polish man, Arkadiusz Jóźwik, was beaten to death in the street. It’s not known yet what any motive might have been, but one line of inquiry for police was the possibility of it being a hate crime. “After the Brexit vote it has got worse,” said his brother, Radek. “I have seen people change – it is hard at the moment.” Five boys aged 15 and one aged 16 were arrested on suspicion of murder, but released on bail until 7 October pending further inquiries. 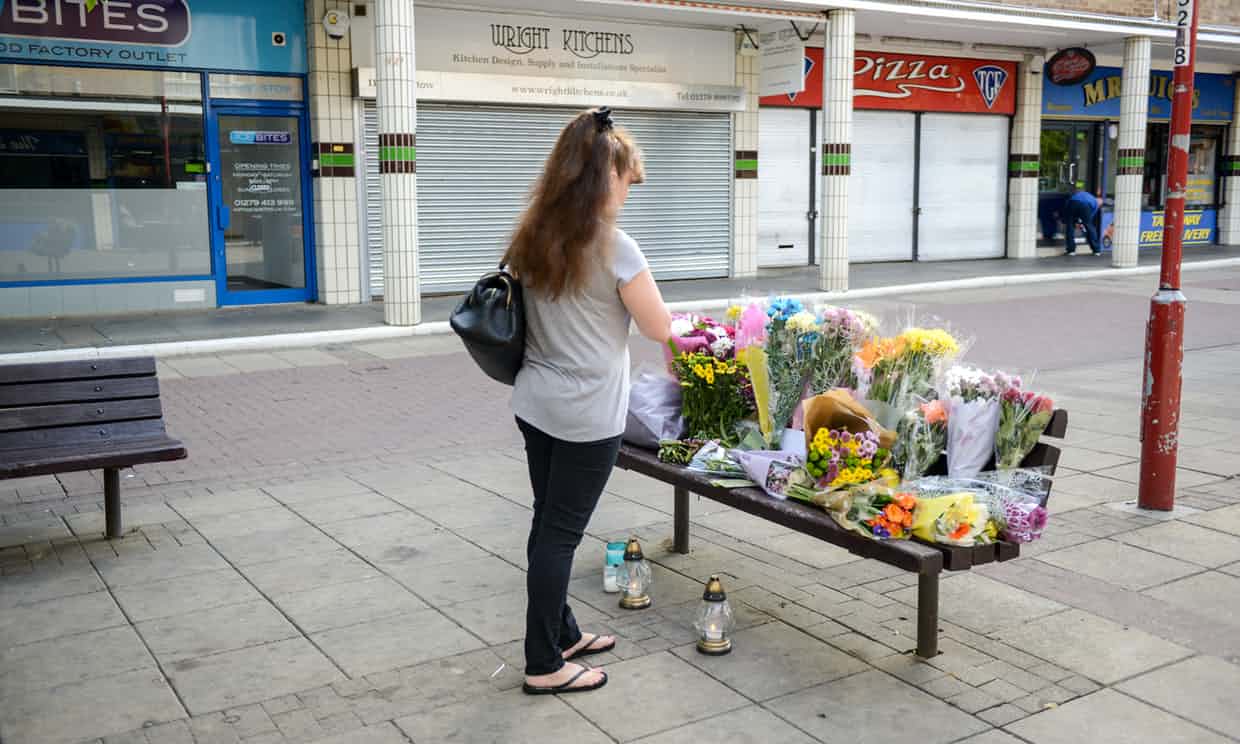 A woman adds flowers to a tribute to Arkadiusz Jóźwik, a 40-year-old Polish man murdered in Harlow on 27 August. Photograph: SWNS.com

Even though Bristol voted overwhelmingly to remain, it has not been immune. In mid July, Alex Raikes, director of the Bristol-based anti-racist group Stand Against Racism and Inequality (Sari), told me: “We’ve had eight referrals in the last 11 days, so that’s nearly a referral a day of an eastern European family or individual. It’s ranged [upwards] from verbal abuse, and nearly all of those people have been told to go back to where they come from, or ‘go back home’, and I haven’t heard that kind of language in quite a long time. They’ve had eggs thrown at them, windows smashed, cars vandalised. We’ve had people being verbally abused on the bus, we had a horrible case of a family being attacked in a park – the adults and children threatened to set their hair on fire and even kicked them.”

As well as animosity, there have been expressions of solidarity. Friends of Arkadiusz Jóźwik have organised a unity march through Harlow in his memory on Thursday. In Bristol, the Playfull toyshop offered a rose and an apology to all immigrants – a gesture that made the news around the world. “My friend just thought: ‘I want to do something small, something local,’” says owner Kerstin Price, who was away when it happened. She didn’t think that it would be a “mega, mega response”.

In Kopernick, a Polish shop in Sunderland, its shelves stacked with herring, hams, vodka and dried mushrooms, Marina says things have been fairly quiet. Sunderland may have voted leave, but the only response she has encountered has been people coming in to commiserate. “They came to say sorry because they voted to stay, and they’re sorry for us. But I didn’t hear anything nasty, not yet.”

Yet bad news travels fast and far. Marina has heard that things are worse in the factories and everyone coming out of the Romanian church in Bristol knows someone who has faced it. 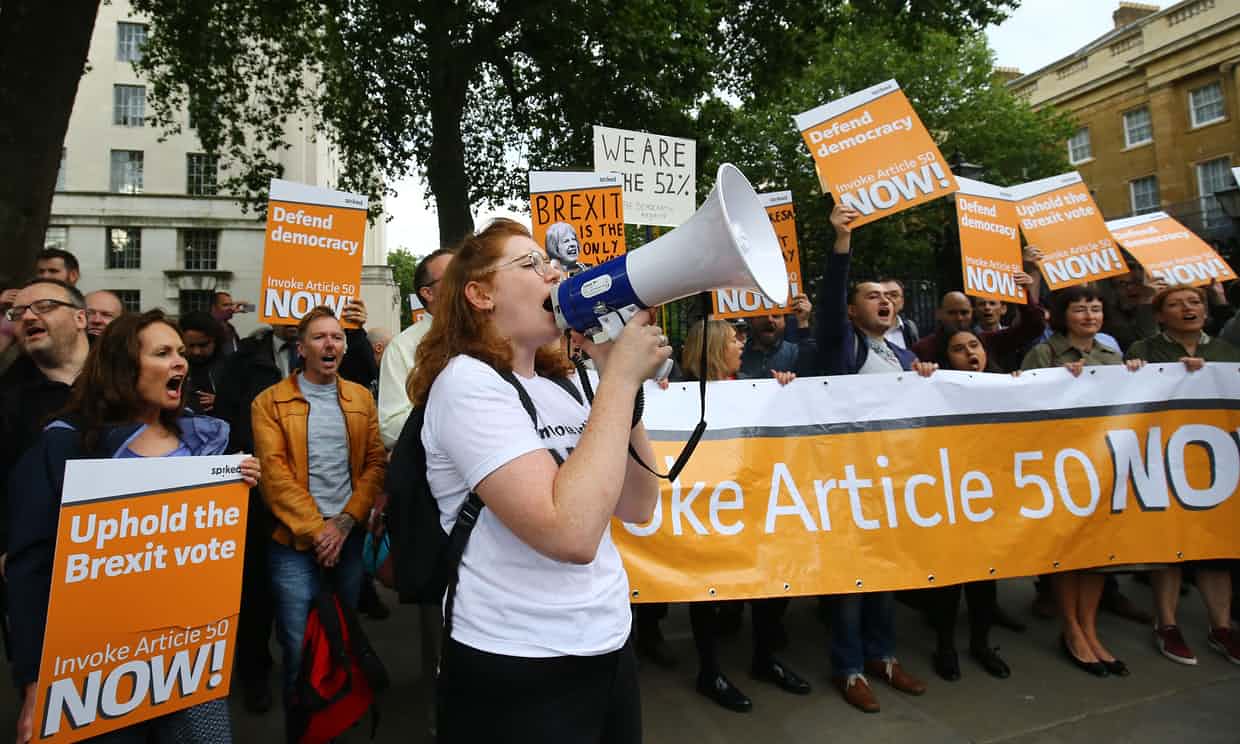 “Statistically, of course you know this isn’t happening to everyone,” says Jon Fox, a senior sociologist at Bristol University. “But it’s not just the statistics, right? My wife is Hungarian. We speak Hungarian at home. We were in a playground last weekend and I half jokingly, half not-jokingly, said to her: ‘Can we speak Hungarian here?’ We’ve been to that playground loads of times. But there’s … a heightened sensitivity which is reflected in the reporting of the crime statistics. There is more hate crime now, and there’s more reporting of it too, because people are tuned into it.” And alongside the visible “other” of race, there is now the audible “other” of language.

In this climate, it’s not surprising that many eastern Europeans have started to ask themselves if they want to stay here. But another question mark hangs over whether or not they will even be allowed to. When running for the Conservative party leadership, Theresa May would not guarantee the rights of EU citizens to remain in Britain post-Brexit. On a recent trip to Slovakia and Poland, May suggested this right to remain will hinge on whether British citizens have reciprocal rights in their countries. There is no official position. But there are human consequences. And so, for all EU citizens in Britain, anxiety about their future fills the void. “I’m redecorating my kitchen at the moment,” says Kinga Goodwin, a Polish-born academic who lives in London. “And every now and then, even though I’m married to an Englishman, I keep asking myself if it makes sense.”

At an eastern European women’s group meeting at the Wellspring Healthy Living Centre in Bristol’s Barton Hill, Anja tells me that her daughter, who had planned to put down roots here, is having second thoughts. “She was hoping to buy a house with her fiance but the day after Brexit, he was approached on the street by a British person saying it was time for him to go back to Poland. The next day they were supposed to be going to see a house they planned to buy, but they cancelled the visit ... they don’t know what to do because of the Brexit situation.” 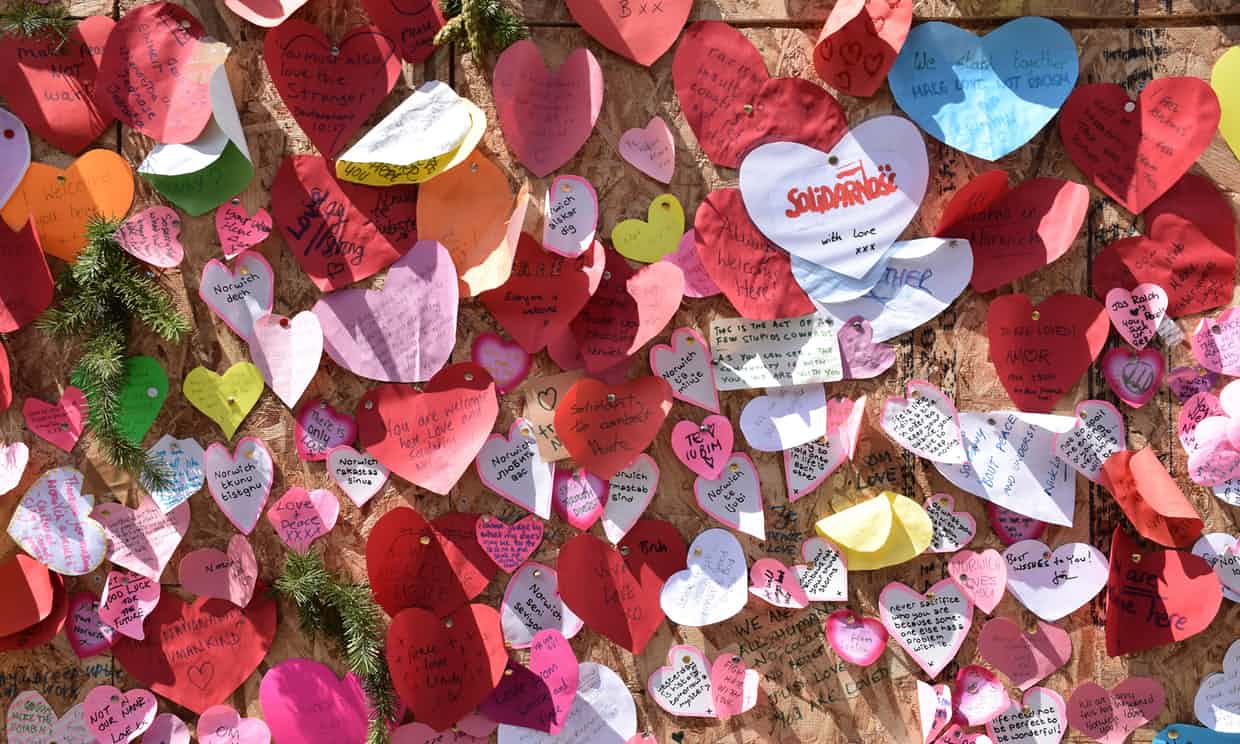 In Sunderland, the referendum result was less of a shock. Daniel Krzyszczak, a manager at the International Community Organisation of Sunderland, which works mostly but not exclusively with eastern Europeans, notes the rise of Ukip over the past few years, and points out that anti-immigrant sentiment simply intensified following the Brexit campaign. One factory worker, who would not give his name, shows me a poster that was put up in his changing room a couple of days before the referendum, stating: “Vote out EU, come on England, get the cunts out.”

Brexit didn’t introduce xenophobia or racism to Britain, but it has complicated our understanding of both. Like immigrants from former colonies after the second world war, the east European migrants thought they were coming for a short time, stayed longer, did work others wouldn’t and started families. There is also much in the nature of the hostility that chimes with previous scripts. In keeping with the tropes of prejudice and bigotry, they have been depicted simultaneously as welfare scroungers and as workers who “steal” jobs from local people and refuse to integrate.

This is not the first time white people in Britain have been racialised on account of their distinct religious, national or cultural affinities. Jews, Catholics, the Irish and Gypsies have all been, and can still be, discriminated against because of who they are.

In the wake of the Brexit vote the distinction between racism and xenophobia blurred. “It’s not just eastern Europeans facing the abuse,” explains Raikes. “I had a dual-heritage family with a mum and her 11-month-old baby going past the pub the day after the referendum and a load of guys shouted at them and said: ‘Now we’re leaving the EU, go back to where you came from,’ and spat on them.” 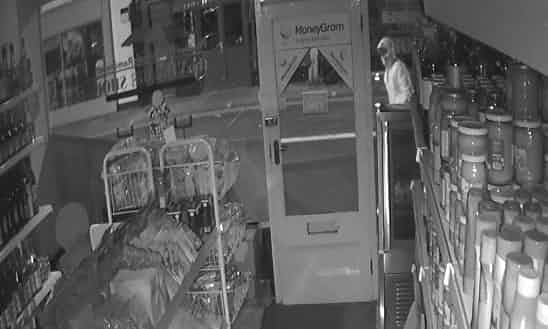 CCTV footage of the night of the arson attack on The Village Shop in Norwich. Photograph: Submitted/Archant

And if bigots weren’t making the distinction, neither black Britons nor eastern Europeans were necessarily seeing the commonalities between their experiences either. Examples of Black and Asian voters complaining about eastern European immigrants in the runup to the referendum were legion. And one of the reasons why so many eastern Europeans were shocked by the response post-Brexit is because they thought racism didn’t apply to them.

“European groups who live here don’t necessarily see race equality organisations as representing them,” says Omar Khan, director of race equality thinktank the Runnymede Trust. “They don’t necessarily frame their experiences as racism. Often they think they’re white and Christian and so are British people and aren’t we all European. I think also we have to be frank in saying there are real tensions between these groups sometimes. Black British groups can feel that, compared with when they came over, Europeans have better access to benefits; they may also feel that eastern Europeans are more racist than white British people. Obviously, to the extent that they feel that way, it’s a barrier to working together to eliminate discrimination.”

One of the most egregious attacks in Newcastle was against a young black Polish woman who was harassed on a bus. When she got on, a youngster shouted: “I’ve never seen a monkey on a bus.” Then they started talking about Europe. “Something about stealing jobs and things like this,” the woman says.

Then she started talking to her friend in Polish. The boys carried on shouting. When she ignored them, one of them set her hair on fire.

“Do you think that was about you being black or Polish?” I ask her.

“How would I know?” she shrugs.

• Gary Younge’s Eastern Europeans in Brexitland is broadcast on 5 and 12 September at 8pm on BBC Radio 4. It is repeated on 7 and 14 September at 11am.