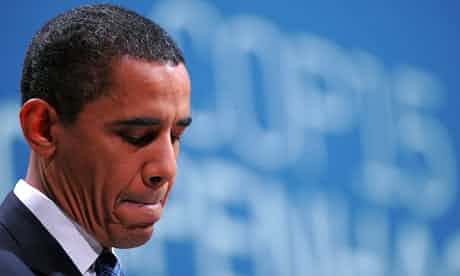 'Even Charles Manson could beat him now'
The Guardian,
Photograph: Jewel Samad/AFP/Getty Images

The following correction was printed in the Guardian's Corrections and clarifications column, Friday 29 January 2010

The name of a no-alcohol drinking spot that was set up in Lexington app­eared as All Bar None; the "All" was wrong

Every Wednesday at 4.30pm they come: a small steady human trickle rolling down a ravine in Prestonsburg, eastern Kentucky ­towards the Town Branch church. They come in pick-ups, on foot, alone and with families. Some stop for just a few minutes. Others linger. They come for food and warm second-hand clothes. They come because desperation in this part of America has become a routine part of life.

More than a quarter of the families in Prestonsburg live in poverty; half of the children in Floyd County, where it is situated, are on food stamps. This ­Appalachian coal mining area has never been rich. But no one can remember when it has ever been this poor either. It sits on the old Route 23 – the country music highway of which Dwight Yoakam (a Floyd Country native) sang in Readin', Rightin', Route 23. It was the road that took people north to factory jobs in places such as Detroit and Cleveland and "the good life they had never seen". Now those cities are broke and there's nowhere left to go.

"We're getting more and more ­people coming here as time goes by," says Tom Price, who helps administer the church's Feed My Sheep pantry. "The bottom's just fallen out of it all." He blames it on Barack Obama. "Is there a direct correlation [between Obama's victory and the region's bad times]? I don't know. But I do know a lot of people are hurting."

A week may be a long time in politics. But a year has not been enough for the Democratic president to meet the expectations of his candidacy, deal with the situation he inherited or defuse the barbed charges of his detractors. For many the change that Obama promised when he was inaugurated a year on Wednesday has ended up being a change for the worse. Unemployment is rising, houses prices are falling, unpopular wars are still raging. After 100 days only Ronald Reagan had higher approval ratings for his first few months in office than Obama. But as his first year draws to a close nobody has had lower ratings at this stage since Dwight Eisenhower.

Keith Bartley, Floyd County's Democratic chairman, says one key reason why Obama's such a tough sell here is because of the effect of his cap and trade policy on the coal industry. Lt Governor Daniel Mongiardo, the Democratic frontrunner in Kentucky's senatorial race later this year, says he would not want Obama to come and stump for him on the campaign trail, particularly because of his environmental policies. "With some of the positions he has taken, especially on coal, no. He certainly can't come into eastern or western Kentucky and help. Nor would I want him to."

But the disenchantment goes beyond one region or one industry. The official narrative of Obama's inauguration – the fairytale most of the US media told itself and that the international community wanted to believe – was that after a ­rancourous campaign a divided country came together to celebrate the historic election of its first African-American president. The reality was always quite different. The editor of the Grayson County News Gazette in Leitchfield, a small town 230 miles west of Prestonsburg, recalls that the day after the election much of the area wore sombre faces. The week he was elected gun sales across the country leapt about 50% compared with the same period the year before.

For all of his aspirations for bipartisanship, after the first three months Obama had the most polarised early job approval ratings of any president in the past four decades. The gap between how Democrats and Republicans rated him at this stage was greater than George Bush Jr's in 2001 and twice as high as Richard Nixon's during the height of the Vietnam war in 1969. This was partly because Democrats loved him so much – but it was also because so few Republicans were willing to give him a hearing. Obama didn't create that partisan divide, he inherited it. Not only has he not been able to cure it, but his presence seems to have exacerbated it.

Truth be told they never really liked Obama much in Floyd County. He won only 5% of the vote against Hillary Clinton's 94% in the primaries. But until recently they did love Democrats. In the 2004 election John Kerry won the county with a 25-point margin. In 2008, John McCain took it by 2 points – the first time a Republican had won Floyd in living memory. That's to say following hurricane Katrina, the failure in Iraq, the collapse of the economy and the unravelling in Afghanistan, a sizeable portion of Floyd's voters took a look at Obama and decided that this time, for the first time, they would turn their back on the Democrats.

Back at the Feed My Sheep food ­pantry Cindy Hernandez has just picked up her groceries and is rifling through the secondhand clothes. She has no doubts about why Obama struggled in a county that is 98% white.

"That's because Obama was black. Let's get real," she says with a laugh.

"You mean people are prejudiced in eastern Kentucky?" asks Tom Nelson, the church's pastor who seems genuinely upset by what she said.

"You do not believe that?" replies Hernandez.

"I know some are, but not altogether," says Nelson. Fearing I should get the wrong impression Nelson suggested I talk to Price.

"I voted for McCain," says Price. "Because, well I voted for the old white guy. At least he's American." A few days earlier, the chairman of the Republican party in Jackson County, Arkansas, insisted electing Obama is destroying America in the same way electing Nelson Mandela destroyed South Africa. "Handing it over to the wrong people."

To ask where racism ends and politics begins in all of this is to set up a false dichotomy – America's politics has always been steeped in race and racism is a political force. The psychic scars of centuries are not removed in one election or as a result of one person. Indeed they may be deepened and made even more raw as a result of them.

The movement that has emerged to oppose him is almost exclusively white. In Little Rock, Arkansas, a city that is 40% black in a state that is 80% white, an anti-tax Tea party rally of several hundred had not one black attendee – apart from an anti-abortion speaker. The doubts they have cast about his Christianity and his birthplace (some claim Obama wasn't born in America) are really proxies for race – a bid to cast him as the ultimate "other". At an anti-healthcare reform rally in Washington in September several racist placards were spotted. One bore a picture a lion and the words, "The zoo has an African lion and the White House has a lyin' African"; another said "'Cap' Congress and 'trade' Obama back to Kenya".

But while racism might inform the intensity and shape the nature of the attacks on Obama they do not drive them. Obama's administration has raised taxes on the rich, expanded public spending, pledged to withdraw troops from Iraq and argued – if only halfheartedly – for universal healthcare. Conservatives have good reasons to be against him that have nothing to do with race.

"It's hard to specify a single source for the opposition," says Rev Wendell Griffin, a Baptist pastor and judge in Arkansas. "Part of the opposition to Obama is philosophical. There is in every society a strand of thought that glories in the myth of rugged individualism [and] he challenges that notion. He believes that the idea of a government is to have a concern not just for the individual but for the society as a whole. Some people don't like that." Griffin went on to list racism, economic desperation and the fact that he is no longer an underdog as other reasons.

His rightwing dissenters may be eccentric and racially exclusive but they have also proved highly effective. They have a populist message that excoriates Bush and the bank bailouts as well as Obama and a TV channel – Fox News – to which they are devoted and which is happy to promote their work. A recent poll showed that if the Tea party – a ­protest movement set up earlier this year to rally opposition to the stimulus bill and "big government" – were a party it would beat the Republican party.

Every week a "9/12" group meet at the non-alcoholic All Bar None in Lexington, Kentucky. This was an initiative started by Fox presenter Glenn Beck, in order to return America to the values of patriotism and godliness that he says America embraced the day after 11 September. Fourteen showed up the night I was there. A straw poll revealed that none of them blamed Obama exclusively for America heading in the wrong direction, with all preferring to blame the entire political establishment. Half believed Obama is a Muslim, just one thought he's a Christian and the overwhelming majority thought he was a communist, socialist and Marxist. None believe that he was born in America; most said they did not know.

"A lot of information about Obama's background is missing," says Abigail Billings. "The media in America is not doing any research. They're not asking any questions. They're not reporting any longer. They're now opinionated talk shows. They're no longer offering factual news coverage." They all watch Fox News.

Many on America's left are also ­disgruntled with Obama. They believe the healthcare reform, without a public option, will be inadequate, that the war in Afghanistan will unravel, the stimulus bill was insufficient to kick-start the economy and that his economic team is being run by Wall Street. But unlike the right they have so far failed to turn their disillusionment into a potent political force.

Part one of Gary Younge's documentary Opposing Obama will air 1 February on BBC World Service at 10am, 3pm and 8pm GMT

• This article was amended on 18 January 2010. The original text placed Floyd county in western Kentucky. This has been corrected.