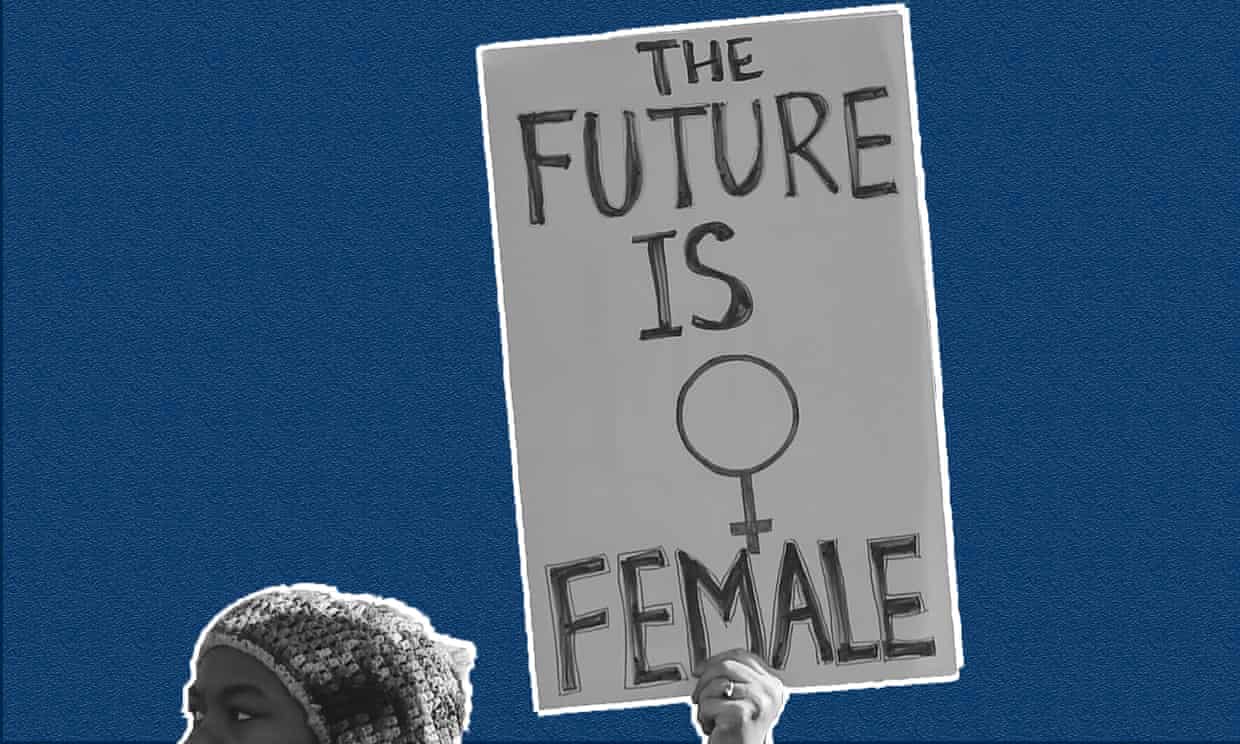 'Nothing to lose': how Trump has energized America's women
The Guardian,
Illustration: Guardian Design/THE GUARDIAN

En route from Chicago to Pittsburgh I stopped off in Akron to see an old friend, Susan Aylward. I first met Susan outside a cinema in 2004. It was just a few months before the presidential election and I was reporting from Ohio on the opening night of Michael Moore’s Fahrenheit 9/11.

Campaigners for the Democratic nominee, John Kerry, were trying to give her stickers but she wouldn’t take one. She had voted for Ralph Nader in 2000. Incensed by the Iraq war, she planned to vote Democrat this time. “People don’t love Kerry because they’re not sure what he stands for,” she said at the time. “But I’m going to vote for him because he’s not Bush.”

We have been friends ever since. I dropped in on her shortly before Barack Obama’s first, historic win. She dared not hope the polls were right for fear she would jinx it. Later she told me that she stayed up on election night with her mixed-race two-year-old granddaughter to witness the moment. ”We kept saying: ‘It’s history, Sasha.’ We wanted her to be able to say she saw it that day, even if she didn’t really know what she was seeing.”

Now Sasha is 12 and Susan, 69, would rather her granddaughter doesn’t watch the news.

“There’s just so much hateful stuff out there now, I just don’t want her to see it,” she says over tacos and mojitos not far from the cinema where we first met.

Susan has been politically active all her life. I assumed, given her left leanings, that she would be backing democratic socialist candidate Bernie Sanders. But she says she’s tired of “old white guys”.

“They’ve had their chance and they’ve not delivered. Even the young black guy didn’t deliver. I want to see a woman take over in my lifetime,” she says. 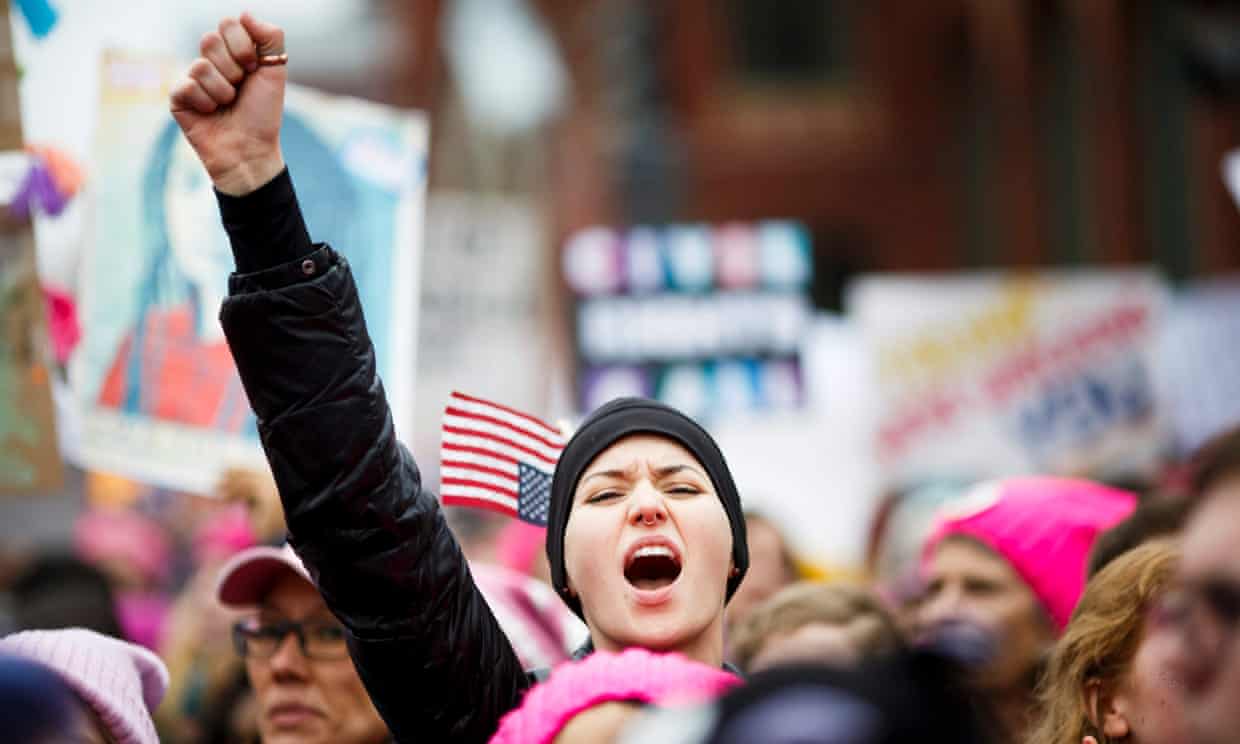 A woman cheers during the Women’s March in Washington DC, on 21 January. Photograph: Justin Lane/EPA

When it comes to gender, Hilary Clinton’s defeat appears to have radicalised many women in a way that her campaign did not. It wasn’t simply that she had lost to a man – that happened during the primaries in 2008, too – but that she lost to that man.

“Trump felt like a particular slap in the face to a certain kind of women in their 50s and beyond,” explains Lara Putnam, a history professor at the University of Pittsburgh. “There’s a particular kind of misogyny that he seemed to glory in that felt both familiar and deeply personal. Women who had been struggling against the guy in the office who was so inappropriate and yet nevertheless was getting ahead. Familiar and completely beyond the pale. The insult of this particular kind of misogyny which they felt they had been transcending. And then it comes back. And some people felt: ‘I’ve lived this story. I thought we’d done with this. And now my fellow citizens have voted this person into office.’”

It is this very particular group of women, argues Putnam and fellow academic Theda Skocpol of Harvard (among others), who are remaking American politics from the ground up. Less a coherent left ideological movement than an extended period of liberal civic militancy, it is the contributions of primarily white, suburban, university-educated women who are revitalizing the Democratic party base.

They are sometimes women who have known each other since helping to elect Obama in 2008 who found each other again around the time of the Women’s March and range politically from the centre to the left. Living in the suburbs, to them a Trump supporter is not a distant metaphor but their next-door neighbor or co-worker.

They follow issues such as #MeToo or the Alabama abortion law, says Putnam, but their energies are focused locally, on races for school board, coroner and town council as well as more procedural democratic issues such as gerrymandering, automatic voter registration or the politicization of the census.

While the vanguard of this civic insurrection might be white women and their interventions may not be overtly ideological, their engagement has not simply produced clones of themselves, insists Putnam.

“The core volunteers look remarkably the same … but the impact of their involvement has created openings for new people to be elected or make legitimate runs for office and those people don’t look at all alike. What they’re bringing is new energy that creates new onramps for the recruitment of candidates who don’t look like the incumbents and look more like potential Democratic voters than the current incumbents.” 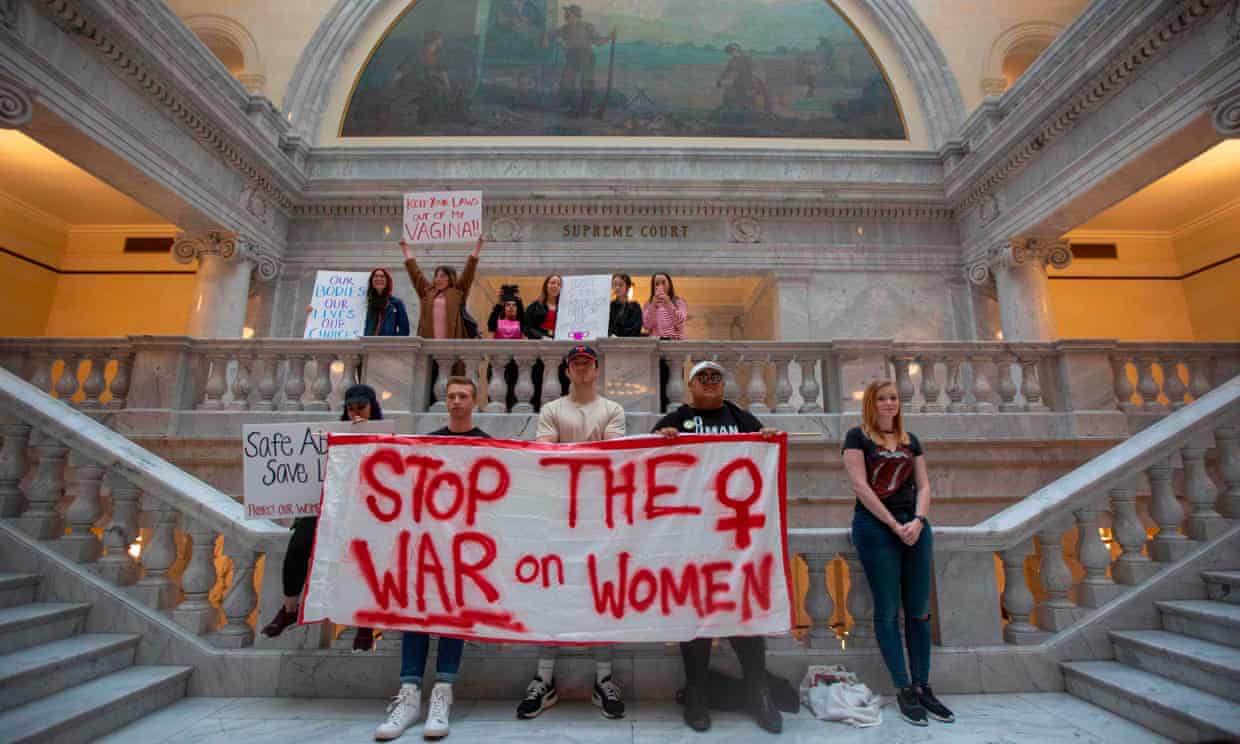 Protesters rally against abortion bans at the capitol building in Salt Lake City, Utah, on 21 May. Photograph: Natalie Behring/AFP/Getty Images

Halfway through lunch with Putnam, the Pennsylvania state representative Sara Innamorato, who was elected in 2018, joined us and told her story. While working on a project to uplift women in south-west Pennsylvania she found out that the person who was representing her at state level, and whom she had voted for herself in the past, had voted to restrict abortion access, against commonsense gun reform and supported anti-immigration legislation among other things.

“I knew enough about the mechanics of how to run; the paperwork you had to file; the deadlines you had to meet,” she explained. “But I didn’t have enough of the local political knowledge to deter me from doing it. Because if I was brought up in that political space I would never have done. I would have thought that family is too powerful, they have too much money, this person is going to ostracise me. But I had nothing to lose. What were they going to take away from me?”

I had nothing to lose. What were they going to take away from me?

Innamorato ran as a democratic socialist and beat the establishment candidate, who was from a prominent political family who had held the seat for a decade and was elected unopposed the last three times. She won 64% of the vote and saw turnout leap from 18% to 48%.

“I’ve done a lot of work in the community,” she explains. “So I was an easier pill to swallow than someone who came in and was a millennial and had stereotypes that could be applied. I was knocking on doors of people who were my lunch lady in elementary school and they felt very comfortable and confident that I would fight for what was saying. I think it’s important not to lead with the word [socialist]. But it’s also important not to run away from it.”

She was not the only socialist elected to the state house that night in Pennsylvania. Summer Lee also won a seat. Lee is African American and she won with 67% of the vote in an overwhelmingly white district that had been represented by the same man for the last 20 years.

Innamorato left us to join a rally of striking workers in town. “The genuineness of Sara’s message was really impactful within her district,” says Putnam. But she believes ideology did not play as significant a role as many assume. “The fact she knew her lunch lady was super impactful. She had a tactical vision of social networks within her community and she hit the right points. I’m not denigrating her vision of her policy goals, but my sense is that wasn’t what inspired her voters. If she had done those same things with a more centrist but reform message she also would have won.”