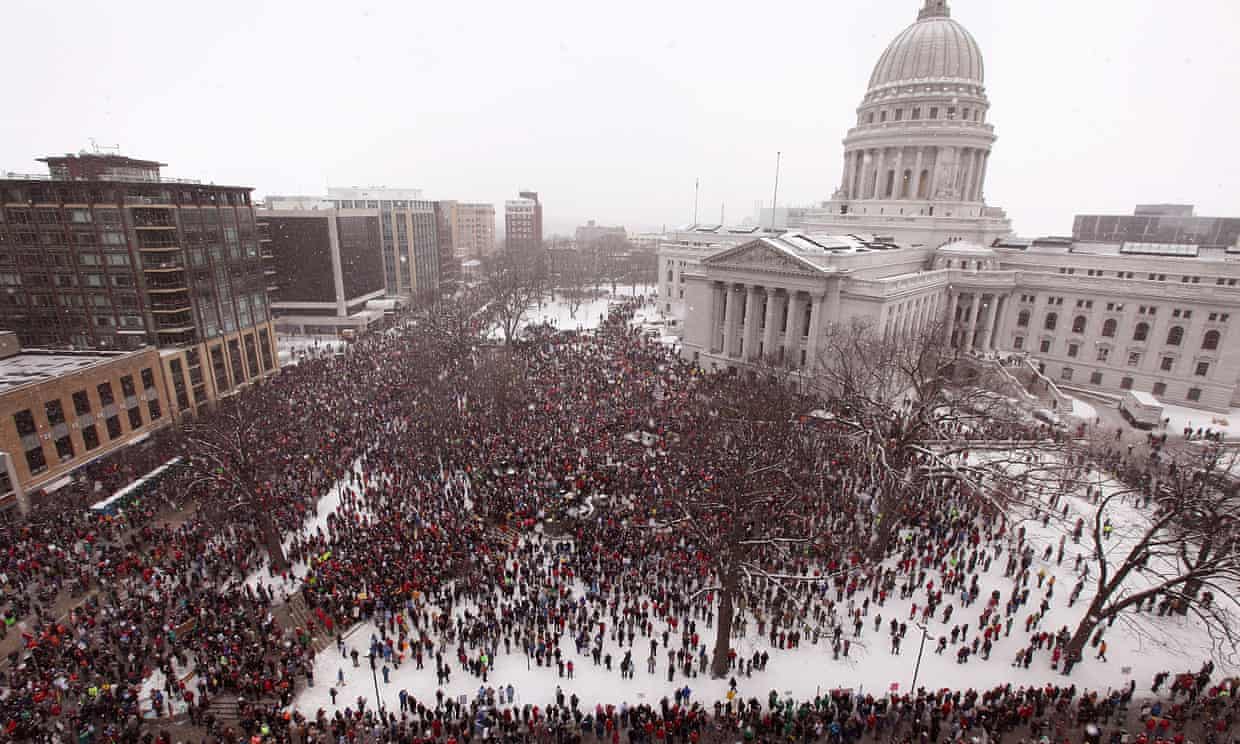 'They are so sick of losing': hopes of Wisconsin left tempered by past
The Guardian,
Photograph: Scott Olson/Getty Images

Elly Gallaher, who has been politically active for years, has seen some new faces at the Democratic party office in downtown Racine, Wisconsin. Angelina Cruz, who runs the teachers’ union in town, says people seem more receptive on the doorstep this time than in the recent past. Erin Forrest, the executive director of Emerge Wisconsin, which encourages and trains Democratic women to run for public office, believes voters are finally making the connection between the fallout from austerity and the Republican governor, Scott Walker, who advanced it.

In a range of ways, Democrats here feel that something is different this time.

“In 2016 a lot of people felt their vote didn’t matter,” said Cruz. “Now we tell them it’s so close and you should try to get a friend or a family member to come to the polls with you. And they are listening. I think in the context of Trump and all the things he’s done, people feel powerless and this is something you can do.”

Most describe a mood of cautious optimism. Democrats in Wisconsin maintain a tight but narrow lead in the governor’s race, seem to be running away with the Senate race, and even feel they have an outside shot at the seat of the outgoing House speaker, Paul Ryan, in which Racine sits. Things look good. But they have been here before.

Most progressives here have a story of waking up the morning after election day two years ago to find Wisconsin had not only voted Republican for the first time in more than 30 years – it had voted for Donald Trump. For many it changed what they felt about the state they had lived in all their lives. “I remember being in public spaces and looking around and thinking, ‘Which of these white people voted for that crazy person who hates everything that I am?’” said Cruz.

To understand the source of their caution one has to go back further. Eight years ago, in the wake of the financial crisis, Walker was elected governor and almost immediately sought to end collective bargaining rights for public sector unions and cut local government workers’ health benefits and pension entitlements in order to balance the budget. “Wisconsin was a testing ground for some extreme Republican policies,” explained Forrest. “Organisations like Alec [a rightwing lobbying group] and people like the Koch brothers wanted to use Wisconsin to see how far they could go.” 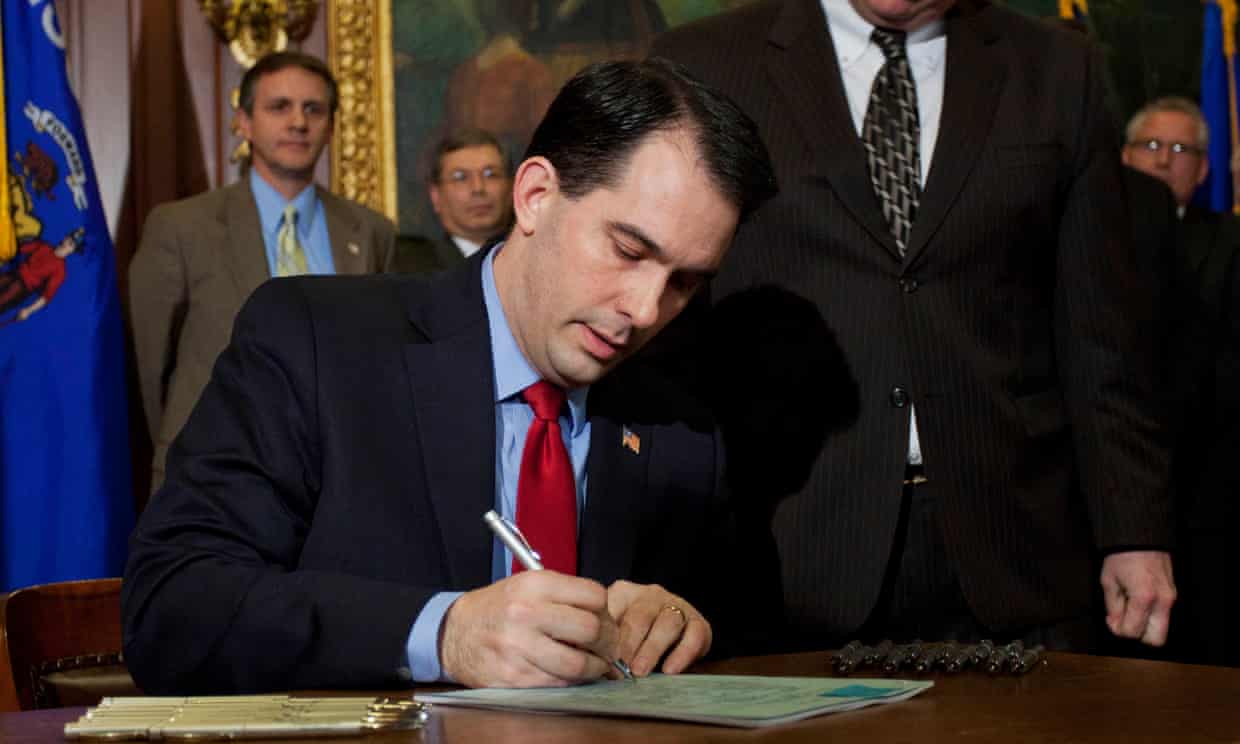 Activists and union organisers surprised themselves with their response. Flooding in from around the state they occupied the capitol, unleashing a series of protests lasting several months. Those were heady times.

“Suddenly a labor movement and a core of allies people thought had faded into the background sprang to life,” said Ben Wikler, a native Wisconsinite and the Washington director of MoveOn.Org. “I remember being at the capitol, looking at a sea of people fanning out all across downtown Madison. Sleeping overnight on the concrete floor, walls covered in Post-It notes sending support to their fellow workers, students rallying alongside their teachers and retirees rallying alongside their kids.”

If Walker was Trump before Trump, then “the uprisings” in Madison that year were the resistance before the resistance. “The Wisconsin resistance fought against neoliberalism,” says John Nichols, the Madison-based columnist for the Nation. “It was a resistance against austerity and austerity-like politics even if people didn’t even necessarily have the words for it back then.”

The energy from the Madison protests was poured into an effort to recall Walker – a provision some states have for effectively demanding a revote. But Walker not only beat off the recall, he was returned with a larger majority and then re-elected in 2014. Then came Trump’s victory in 2016.

So the caution arises not simply from not winning, but having felt the camaraderie of mass protest only to be followed by electoral defeat: it’s not just the depths to which things have fallen but the heights from which the mood fell. So in Wisconsin particularly, when they see four of the five of the largest marches in American history take place in the last two years and sense increased enthusiasm they don’t assume that this will translate into a blue wave. They’re not jaded. But they are reflective.

“As important as every election cycle is,” explained Forrest. “You can’t live cycle to cycle. Whenever something like the uprising or the recall vote happens there’s a wave of new people that come in. And some of them go back out. But there is an infusion of new blood, and new energy and new ideas.” 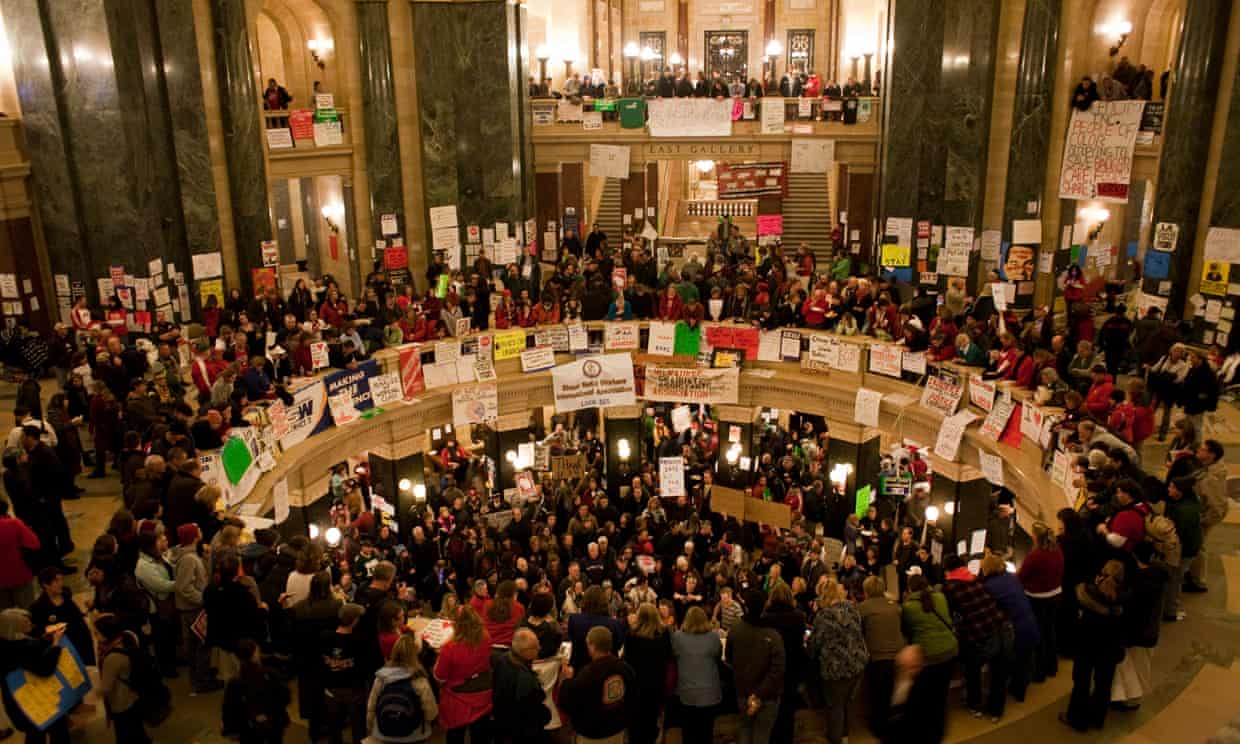 Protesters demonstrate inside the capitol building in Madison in 2011. Photograph: Carlos Ortiz/EPA

Historically, it has generally taken some time for electoral politics to catch up with movement politics, explains Nichols, pointing to how long it took after the civil rights protests emerged for civil rights legislation to be passed or the election of Nixon in the midst of the anti-war campaign. But just because progressives haven’t been winning elections doesn’t mean what they have been doing has made no difference.

“Gradually they put together a new kind of politics,” he said. “We don’t know if it will win. But if it does it will be a dramatically different victory than it would have been in 2012 and 2014. The Democratic candidate for lieutenant governor, Mandela Barnes, is a 31-year-old African American community organiser. A 36-year-old organiser, Sarah Godlewski, [is standing for] for state treasurer, or Josh Kaul, a former federal prosecutor who left that to work on voting rights, who’s standing for attorney general. These are not the traditional capitol aides.”

This has been particularly true for women, explained Forrest, who saw an exponential increase in applications for her programme to train and support Democratic women following Trump’s election and a subsequent huge increase in women running for office. “A lot of women became inspired. And a lot became fed up. Either way they decided they wanted to do something about it.”

The optimism comes partly from most feeling that they have more relatable candidates and partly from feeling that while they were demonstrating against the threat of Walker’s policies, it has taken some time for the reality to hit home.

But in no small part the optimism and the cautiousness are related. They have been here before. So far, early voting in Democratic strongholds is up on 2014 in Milwaukee and Madison. Bernie Sanders was in Kenosha, next door to Racine on Monday; Obama is in Milwaukee, just 45 minutes away, on Friday.

“They are so sick of losing here,” said Wikler. “I wish we’d seen this energy in 2016. But now nobody’s taking anything for granted. And as a result there’s more energy. More volunteers. People understand the stakes.”