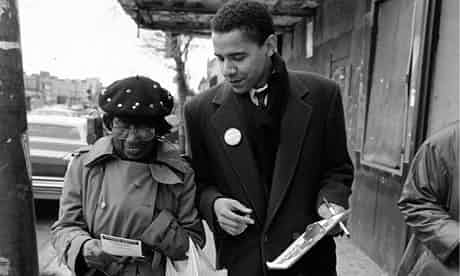 As a community organiser in Chicago's south side, Barack Obama once managed to secure an event with the city's first and only black mayor, Harold Washington. He primed the women he was working with to press the mayor to attend their forthcoming rally to improve conditions in the run-down area.

But instead they fawned and got their picture taken with him. Afterwards he asked if they had extracted a promise about the rally. "What rally?" said one. Obama stormed off in frustration. "Here we are with a chance to show the mayor that we're real players in the city," he told a colleague. "A group he needs to take seriously. So what do we do? We act like a bunch of starstruck children."

As a community organiser Obama was well aware that it was only by making demands on the powerful that the powerless could further their interests. As president he must be delighted to realise that all too few of his progressive supporters have grasped that reality.

The last week has felt very familiar. Just like four years ago, black people in Chicago have been swapping knowing smiles, liberals are watching Fox News to gloat and Democrats have been revelling in the charisma, eloquence and intelligence of their candidate. Their affection for him is rooted in politics but their assessment of him owes more to psychoanalysis. At the celebrations in Chicago on Tuesday most believed he would be more radical in the second term. Ask them what that expectation is based on and they shrug. Ask them what they will do to make sure he meets it and they shrug again. If the devotion is not blind then, at the very best, it is not clear-sighted.

The lesson of the past four years shows that if they want to be taken seriously this time around they will have to stop behaving like a bunch of starstruck children. When it comes to progressive policies Obama will do what he is made to do. He is a centrist, liberal Democrat. There's nothing radical about him beyond his rhetoric. But he will respond to radicals if they put sufficient pressure on him –not because he is mean or cynical, but because that's how politics works.

There has been plenty of evidence of this in the past six months. In May, after years of unconvincingly claiming that his view on gay marriage was "evolving", it miraculously matured five months before an election as support from gay and lesbian voters and young people – who are far more likely to support marriage equality – appeared to be softening. A month later he halted the deportation of thousands of young undocumented immigrants with an executive order. He could have done either one at any time.

He did them when he did because he faced two well-organised communities who held his feet to the fire.

When trade unionist and civil rights leader A Philip Randolph demanded that President Franklin Roosevelt integrate the military, Roosevelt responded: "I agree with you. I want to do it. Now make me do it." They made him do it.

Even before Obama starts his second term he will have once again have to negotiate with Republicans over where the burden for this financial crisis and two failed wars should fall – with the poor and the public sector or the wealthy. Polls show an overwhelming majority in favour of raising taxes on the rich, maintaining a range of entitlement programmes, cuts in defence spending and stricter financial regulation. The problem is there are precious few lobbyists advocating for those popular positions. So the degree to which Obama sides with those who backed him on Tuesday will entirely depend on the degree to which they mobilise in the coming months, not for him but for their own interests.

"What we saw in Occupy Wall Street, the demonstrations in Wisconsin and the teachers' strike in Chicago was a glimpse of our own power," said Jesse Sharkey, the vice-president of the Chicago Teachers Union, which recently ran a successful strike against pay cuts, crude teacher evaluation and part-privatisation (which had been pursued by Obama's former chief of staff, Rahm Emanuel, and championed by Obama). "The difficulty is that the size of the forces that support austerity may be greater than those that will fight against it but the potential of opposition to austerity is far greater than most realise."

Obama's election is important, explains Sharkey, because it offers an opportunity that would not have existed if Mitt Romney had won. "Democrats respond when they're pushed. They're much more a weathervane than Republicans. If the wind's blowing hard enough they'll move."

The trouble is this works both ways. Just a couple of months into his first term Obama called a meeting of banking executives, who feared the worse. "The president had us at a moment of real vulnerability," Ron Suskind quotes one of them as telling him in the book The Confidence Men. "At that point, he could have ordered us to do just about anything and we would have rolled over. But he didn't – he mostly wanted to help us out, to quell the mob."

"I'm not going after you," Obama told them. "I'm protecting you. My administration is the only thing between you and the pitchforks." It was the people with pitchforks who voted for him on Tuesday. They should sharpen them for the months ahead.