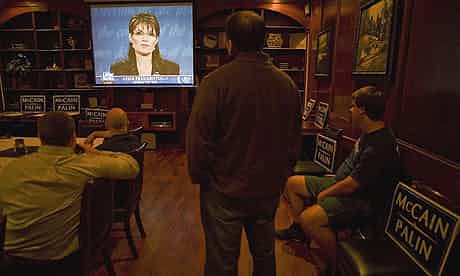 Watching the vice-presidential debate last night with Roanoke Republicans reminded me of the 1980s Specials song What I like Most About You is Your Girlfriend.

Most that I spoke to had not voted for McCain in the primaries. Indeed for some, he was not even the second choice.

It was a low-key, sober affair in the back room of a decent restaurant just outside the city centre. It was also fairly small, with barely a dozen people there - but you got the impression that had he not picked Palin, the event wouldn't have taken place at all.

James Mixon, who was there with his daughter Katie, wore a badge that said "Sarah!" that on closer inspection bore the words "McCain and Palin" in far smaller type underneath. He supported Fred Thompson for president and when he dropped out he backed Mitt Romney.

"Republicans were okay with McCain, but not excited," he explained. "He's come on strong since then and by nominating Palin he's indicated to conservatives that he's serious."

Chris Walters also backed Fred Thompson during the primaries: "I didn't dislike John McCain. But he is an independent thinker and I'm a conservative," he explained.

At the outset, it looked as though the central target of their ire was not going to be Joe Biden but the moderator Gwen Ifill, who had been accused of bias because she's writing a book about Obama.

"She's terrible," shouted one after a minor stumble at the outset. "Great question Gwen," came another sarcastic jibe within the first five minutes.

But within 10 minutes, they were focused on the woman of their dreams. An occasional clap and cheer peppered with affirmations of "absolutely".

It's not a great surprise that they thought Palin won. When asked why, the issues never really came up. But Biden apparently looked "shifty eyed"; Katie Mixon liked that "she's a strong woman" and the way both candidates were polite to each other; Gina Wright Hawkins liked her conservatism.

If these debates were ever about actual arguments, then I think Biden would have run away with it. From the get-go, Palin insisted that she had no intention of answering Ifill's questions and she kept to her word. But it's not about arguments but performance, and despite the annoying winking and rote-recitation of talking points, I thought Palin edged it too.

With expectations set so low and her disastrous previous Couric interviews as trails to some humiliating public meltdown, she kept it together which is all she had to do.

Still, you couldn't help feel that some of the Republicans in the room felt they had dodged a bullet. Not necessarily because they thought she would fail, but because the "liberal media" would decide she had failed, and the thing they like most about McCain would once again start to look like a liability.

From what I've been told, the mood at the "Drinking Liberally" event in the centre of town could not have been more different. About 40-50 gathered before two giant screens, drank a lot of beer and played Palin bingo (Don't ask because I don't know).

Boy, am I glad I found some Republicans to watch it with. That Democrat one sounded really lame.