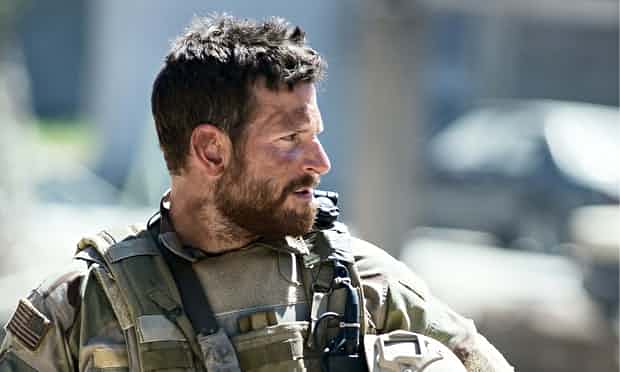 Say what you like about the film American Sniper, and people have, you have to admire its clarity. It’s about killing. There is no moral arc; no anguish about whether the killing is necessary or whether those who are killed are guilty of anything. “I’m prepared to meet my maker and answer for every shot I took,” says Bradley Cooper, who plays the late Chris Kyle, a navy Seal who was reputedly the deadliest sniper in American history. There is certainly no discursive quandary about whether the Iraq war, in which the killing takes place, is either legal or justified. “I couldn’t give a flying fuck about the Iraqis,” wrote Kyle in his memoir, where he refers to the local people as “savages”.

The film celebrates a man who has a talent for shooting people dead when they are not looking and who, apparently, likes his job. “After the first kill, the others come easy,” writes Kyle. “I don’t have to psych myself up, or do anything special mentally. I look through the scope, get my target in the crosshairs, and kill my enemy before he kills one of my people.”

Americans are celebrating the film. It has been nominated for six Oscars and enjoyed the highest January debut ever. When Kyle kills his rival, a Syrian sniper named Mustafa, with a mile-long shot, audiences cheer. It has done particularly well with men and in southern and midwestern markets where the film industry does not expect to win big. And while its appeal is strong in the heartland it has travelled well too, providing career-best opening weekends for Clint Eastwood in the UK, Taiwan, New Zealand, Peru and Italy.

And so it is that within a few weeks of the developed world uniting to defend western culture and Enlightenment values, it produces a popular celluloid hero who is tasked not with satirising Islam, but killing Muslims. Threats to Arab and Muslim Americans have tripled since the film came out, according to the American-Arab Anti-Discrimination Committee. It’s not difficult to see why. “If you see anyone from about 16 to 65 and they’re male, shoot ’em,” wrote Kyle, describing his understanding of the rules of engagement in Iraq. “Kill every male you see. That wasn’t the official language, but that was the idea.”

The west does not see itself the way others see it; indeed it often does not see others at all. Solipsistic in its suffering and narcissistic in its impulses, it promotes itself as the upholder of principles it does not keep, and a morality it does not practise. This alone would barely distinguish it from most cultures. What makes the west different is the physical and philosophical force with which it simultaneously makes its case for superiority and contradicts it. Therein lies the dysfunction whereby it keeps doing hateful things while expressing bewilderment at why some people hate it. It’s as though we are continually caught by surprise that others have not chosen to ignore their humiliation, pain, anger and sorrow just because we have.

“The nationalist not only does not disapprove of atrocities committed by his own side,” wrote George Orwell in Notes on Nationalism. “But he has a remarkable capacity for not even hearing about them … Whether such deeds were reprehensible, or even whether they happened, was always decided according to political predilection.” When these contradictions are rooted in history this sophistry can be neatly buried under time. If Osama Bin Laden and Saddam Hussein were once our allies and have become enemies, then so be it. Needs must. What’s done is done. History that is inconvenient conveniently loses its legacy; an unpalatable past loses its connection to an unfortunate present. Reference to genocides and colonialism are dismissed as the fetid grievances of yore. Why keep bringing up old stuff?

But what should we make of this hypocrisy when it happens in real time; when the devoutly held principle is being brazenly flouted even as it is extolled? For over a decade the US condemned human rights in Cuba even as it operated a facility in that very country, Guantánamo Bay, which openly violated those very rights.

In the wake of the terror attacks in Paris, Tony Blair told a closed-door meeting of around 300 Republicans that force was necessary to confront radical Islam. The US secretary of state John Kerry described the attack as “a larger confrontation, not between civilisations, but between civilisation itself and those who are opposed to a civilised world”.

One might assume that Saudi Arabia, where women can’t drive and atheists are treated as terrorists, was on the wrong side of that confrontation. After all, it beheads more people than Isis and has been a key source of funding for terrorist organisations. It’s certainly no fan of freedom of speech. Two days after the killings in Charlie Hebdo’s offices in Paris, Saudi blogger, Raif Badawi, was flogged 50 times after being found guilty last year of insulting Islam. His calls for more political and religious freedom left him with a sentence of 10 years in jail, and 950 more lashes to be administered at a rate of 50 a week.

But when the nation’s leader, King Abdullah, died last week Kerry hailed him as “a man of wisdom & vision. US has lost a friend & Kingdom of #SaudiArabia, Middle East, and world has lost a revered leader”, while Tony Blair tweeted: “He was loved by his people and will be deeply missed.”

Pointing out these hypocrisies justifies nothing. Seeking to understand the source of hate does not equate to condoning hateful acts, regardless of who is committing them. But reflecting on that source is a precursor for a level of self-awareness that is both clearly lacking and clearly needed. Human rights are not a western value, but a universal one that is imperilled when people pick and choose whose humanity they are prepared to respect and protect and hope nobody will notice.

The Uruguayan author Eduardo Galeano once told me that the apparent reluctance to learn from the past scared him. “My great fear is that we are all suffering from amnesia,” he said. “I wrote to recover the memory of the human rainbow, which is in danger of being mutilated.”

Kyle was a young, working-class man who was losing direction in life when he saw people he identified with being senselessly killed on the other side of the world (according to the film he was radicalised by the embassy bombings in Kenya and Tanzania in 1998) and decided to sign up to go and kill them back. Sound familiar? “I don’t see too much grey,” he wrote. “If I had to order my priorities, they would be god, country, family.” He was every bit as much a jihadi in uniform as his nemesis, Mustafa, was a soldier in casual wear.