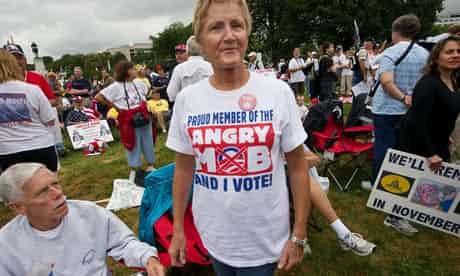 First, she won the endorsement of Sarah Palin, who told Fox News's Sean Hannity: "[O'Donnell] is the real conservative in the race."

Then came word that her own party had filed a formal complaint against her with the Federal Election Commission for collaborating with the Tea Party Express in ways that are illegal. "Sadly, Christine's just not really a legitimate candidate in Delaware," the Republican state committee chairman, Tom Ross, said recently. "She makes a decent presentation until you know the facts."

Propelled by conservatives from afar and repelled by her party establishment at home, O'Donnell is the latest Tea Party candidate to surf a late tide of insurgent support that could clinch her the party's nomination tomorrow. Democrats, like O'Donnell's supporters, are praying for her victory. Polls show that against her their candidate would have a nine-point lead; against her more moderate opponent, Mike Castle, the Democrat would trail by 11 points. Their precarious control of the Senate will hinge on precisely these outcomes.

The fact that the best hope for the Democrats in November's midterm elections is for Republicans to select candidates so ridiculous and reactionary that voters have no choice but to vote Democrat lays bare the parlous state of American electoral politics.

After Bush's second term, which infuriated liberals and embarrassed conservatives, came a brief rush of enthusiasm among at least half the country over the potential of Barack Obama's presidency. After that brief, euphoric rally, the political class is now double-dipping back in cynicism and desperation and taking the country with them.

Democrats should be careful what they wish for. Just because Republicans are becoming more extremist doesn't mean they can't win. Two Tea Party candidates have already been selected in safe Senate seats and five are on the ticket in tight races. Of these, two hold double-digit leads and the remaining three are in dead heats.

Indeed, the first of two certainties come November is that the Congressional Republican caucus in both houses will emerge even further to the right than it went in. For the foreseeable future, the republicanism of George Bush Jr will be understood as a period of relative moderation. The birthers and Ground-Zero mosquers who use "Muslim" as a slur and compare Obama to Hitler have broken through. Their politics may not be credible, but their potency as an electoral force certainly is.

The second is that the Democrats will emerge with less seats than they went in with. The current prognosis is that they are likely to lose the House of Representatives and could possibly lose the Senate.

Either way, when it comes to advancing progressive legislation this is about as good as it gets for Obama until 2012. The last two years he has had to scrape around cajoling votes out of politicians one by one to cement wafer-thin majorities for his landmark achievements like healthcare reform and the stimulus package. He won't have to do that anymore for the simple reason that the wafer will be gone. Whatever he achieves after November will be both incremental and inoffensive to a resurgent and radicalised right wing.

The most convenient explanation for this would be to blame Republicans. The only route map they have been able to imagine for their own success has been through Obama's failure. To that end they have conducted themselves, for the most part effectively, as a solid, obstructive bloc to virtually every measure Obama has put forward, including some that they actually believe in.

But the truth is the Democrats really only have themselves to blame. For the best part of a year they had a veto-proof majority in the Senate and still boast a sizeable majority in the House. They could have passed any legislation they wanted. But what they have had in numbers they lacked in solidarity and conviction. The votes Obama went scavenging for were usually Democratic ones.

For some Democrats this was an electoral calculation that they could not get re-elected if they supported Obama's agenda. Unfortunately for them, they got their sums wrong. According to the non-partisan Cook Political Report, 23 of the 39 Democrats who voted against the healthcare bill are in seats the Republicans have a good chance of winning.

So having made an enthusiastic pitch for power four years ago and been handed it, the Democrats now appear to be unable to wield it and unclear as to what they would use it for. This is not a particularly strong position from which to go back to the electorate and ask for more power. While this is not primarily Obama's fault, it has certainly been his problem.

The greatest defence of his presidency so far can be summed up thus: things were terrible when I came to power, are much better than they would have been were I not in power, and are more likely to improve faster because I am in power. These assertions are basically true. But they are also problematic on three crucial fronts.

First, given the high ideals of his campaign, they set the bar too low. Second, they primarily hinge on how bad Republicans are rather than how well Obama has done. And third, they represent a justification about the past and a promissory note about the future that fails to address what people are going through now.

Obama can list considerable achievements: a version of healthcare reform, so elusive for so long, is now in place; most of the troops that were in Iraq are now out; a stimulus package was passed; a Latina is on the supreme court – quite a lot for any president to show for a whole term let alone the first 18 months, and will likely have more positive lasting effects than Bill Clinton's entire presidency.

The trouble is that, on almost all counts, while these are impressive they are also insufficient. The stimulus package was not big enough; improvements in healthcare coverage will be slow and are anything but comprehensive; the occupation in Iraq has been downsized and rebranded but US soldiers are still dying there. In Afghanistan, where he has escalated troops, the situation is deteriorating. During his first year in office, the poverty rate leapt by 1.8% to 15% – the steepest annual increase since records began. Unemployment is 9.6%; when he came to power it was 7.6%. The foreclosure rate has also increased.

People can't eat hope. And at this point to insist that it was Bush who made them hungry is an argument relatively few will swallow, even if there is considerable truth to it. The electoral cycle demands more positive answers than the economic cycle will allow, and more than Obama or the Democrats can provide.

That the victory of a fantasist and fundamentalist like O'Donnell is even possible is indicative of the ideological decline of and division within the Republican party. That such a victory would also represent the Democrats' best hope illustrates a descent into despondency that makes the excitement of two years ago seem like it belonged to another country.