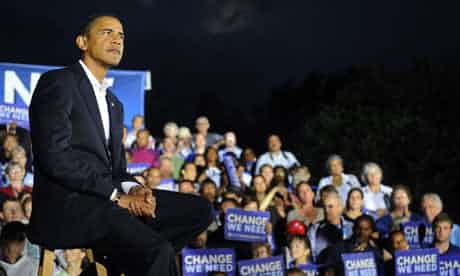 Another poll has Obama edging ahead in Virginia. Rasmussen gives him a three point lead. Last week it was five. That's still within the margin of error and that could be a bigger margin than usual. It could go either way. And that's the point. It's Virginia. It's supposed to go one way: Republican. That's what it's done for 44 years. It's the only Southern state Jimmy Carter couldn't win. Yet Pollster.com has them running exactly even; Electoral-vote.com has it leaning Democrat. FiveThirtyEight.com gives Obama a 78% chance of taking it.

The former Virginia governor, Doug Wilder, told me a few weeks ago that he has long been convinced this was possible. He recalled standing next to Hillary Clinton in Little Rock, Arkansas as the 1992 presidential election results rolled in. Bill Clinton lost Virginia then by just four points. "Wow Doug, look how close it is in Virginia," she said. "Yes," answered a slightly piqued Wilder. "Had you campaigned or put resources there we could have won it."

Obama has invested huge resources here. The vote-rich battleground areas are in Hampton Roads on the Eastern seaboard and the northern suburbs, near Washington, DC. On Saturday around 12,000 people turned up in Fredericksburg to hear Obama speak. Another 14,000 waited outside in the rain.

To counter that success, McCain will have to rally the Republican base in the south-west of the state in places like Roanoke, an area he lost to conservative Southern preacher-cum-governor Mike Huckabee in the primaries. I wouldn't be surprised if we see Sarah Palin down this way once debate camp is over.