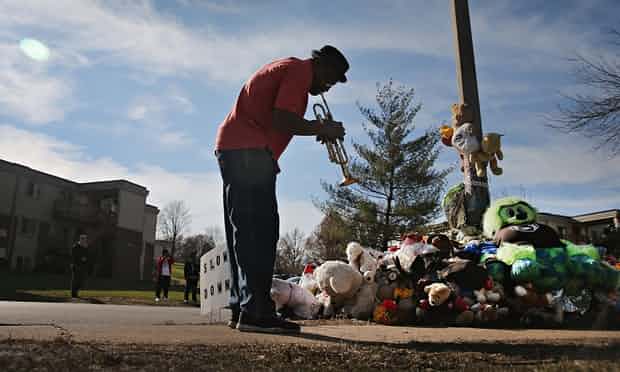 In normal circumstances Bill Cosby would have a great deal to say about Michael Brown, the black teenager shot dead by a white policeman in Ferguson, Missouri. A decade ago Cosby lambasted working-class black communities for effectively choosing victimhood over personal responsibility in precisely such a circumstance.

“Looking at the incarcerated, these are not political criminals,” he said, in a speech hailed by conservatives everywhere. “People getting shot in the back of the head over a piece of pound cake! Then we all run out and are outraged, ‘The cops shouldn’t have shot him’. What the hell was he doing with the pound cake in his hand?”

Brown allegedly stole cigarillos shortly before he was shot. Real or imagined, they were his pound cake. Since the shooting, conservatives have been portraying Brown as a violent “thug” and thief, as though such qualities, even if accurate, would qualify a man for summary execution. Never mind that he was unarmed, that his dead body was left in the street for four hours. What the hell was he doing with those cigarillos?

But these are not normal circumstances. Not for Cosby anyway. While the grand jury was deciding the fate of Darren Wilson, the policeman who shot Brown, a growing number of women came forward alleging sexual assault by Cosby over a 40-year period. Most of the accusations are remarkably similar; they say he drugged them and/or forced himself on them. Cosby has not been arrested or prosecuted, and denies all of them. He settled one civil claim out of court for an undisclosed sum. So Cosby isn’t saying much about Brown or anything else. The patriarch, who once delivered lectures on personal responsibility from the moral high ground, is now up to his neck in quicksand.

These two cases are entirely unrelated. Yet their simultaneous occurrence has produced overlapping distortions, convolutions and conversations that are worth interrogating. There are no equivalents, but there are parallels. Between them they have set the plausible against the legal and the power of the accused against the credibility of the victim.

It is of course possible that all 20 women are making up their accounts of what happened with Cosby. That even though many friends and relatives of the accusers say they were told at the time, it is possible that they are part of a long-running and elaborate scam. That is certainly the claim of his lawyers. “Lawsuits are filed against people in the public eye every day,” read a statement. “There has never been a shortage of lawyers willing to represent people with claims against rich, powerful men.”

It is also, of course, possible that an unarmed 18-year-old man with no serious felony convictions to his name tried to beat up an armed, six-foot-four-inch, 210-pound police officer and continued to charge at him, after he had been shot several times, in such a “demonic” manner that he made that officer fear for his life and keep on shooting. Many things are possible. But only some are likely.

It is also true that both Cosby and Wilson are innocent in the eyes of the law. That matters. It is also morally inadequate. There is more to innocence than mere legality and the law is not alone in having eyes. The law is weighted in favour of the wealthy and the powerful. When threatened, they apply their thumbs to the scale with great pressure and great care not to leave any prints.

It is difficult to secure a rape conviction; it is rare that a police officer is indicted for killing people. The law stacks the odds against the victims and then lawyers hide behind them. “It makes no sense,” claim Cosby’s lawyers, “that not one of these new women who just came forward for the first time now ever asserted a legal claim back at the time they allege they had been sexually assaulted.”

In reality it makes perfect sense. “It was a different time,” said Jim Traitz, whose sister Linda alleges Cosby tried to get her to take a pill and then lunged at her. “We all also knew this was a really big guy with a big PR operation and lawyers, and that he could crush us – that he would crush us – and her,” he told the Washington Post.

“Who was going to believe me?” said Joan Tarshis, who claims Cosby forced her to perform oral sex on him after waking up from what she believes was a drug-laced drink to find him pulling at her underwear. “If he was a regular Joe, I might have done something.”

Which brings us back to the pound cake and blaming the victim. For it was not just Brown’s theft that apparently meant he deserved to be shot, but also his heft. Wilson described him as though he were endowed with superhuman strength – the embodiment of Sonny Liston as portrayed by poet and activist Amiri Baraka: “the big black Negro in every white man’s hallway, waiting to do him in, deal him under”, “the bad nigger”, the “heavy-faced replica of every whipped-up woogie in the world”.

No victim of police shooting is apparently too young to bear some responsibility for their own death. Tamir Rice, 12, was shot as though by a death squad by Cleveland police, within seconds of them arriving at a park, after he was reported to be brandishing a toy gun. On the day a video of his killing was released, a local newspaper led on his father’s history of domestic violence.

Cosby’s accusers are also vulnerable. Most admit to being enthralled by his celebrity and status; some continued to see him after he had assaulted them. Tarshis had a drinking problem and told the Washington Post she has been sober since 1988; Traitz has a history of drug addiction, and a long criminal record, including a recent five-year stretch in prison. The full-scale character assassination these women would receive in a trial is not difficult to imagine.

Ten years ago Cosby condemned poor black communities for violating the post-civil rights consensus with their fecklessness: “The lower economic and lower middle economic people are not holding their end in this deal,” he said. Almost every day women come forward to condemn him for violating their bodies. “When will it end?” asks Cosby’s lawyer, Martin Singer.

Those bringing rape cases and grieving parents of police shootings are also exasperated but pose the question somewhat differently. Every time they see their alleged tormentors at large, lauded as celebrities they ask: how long can this go on?