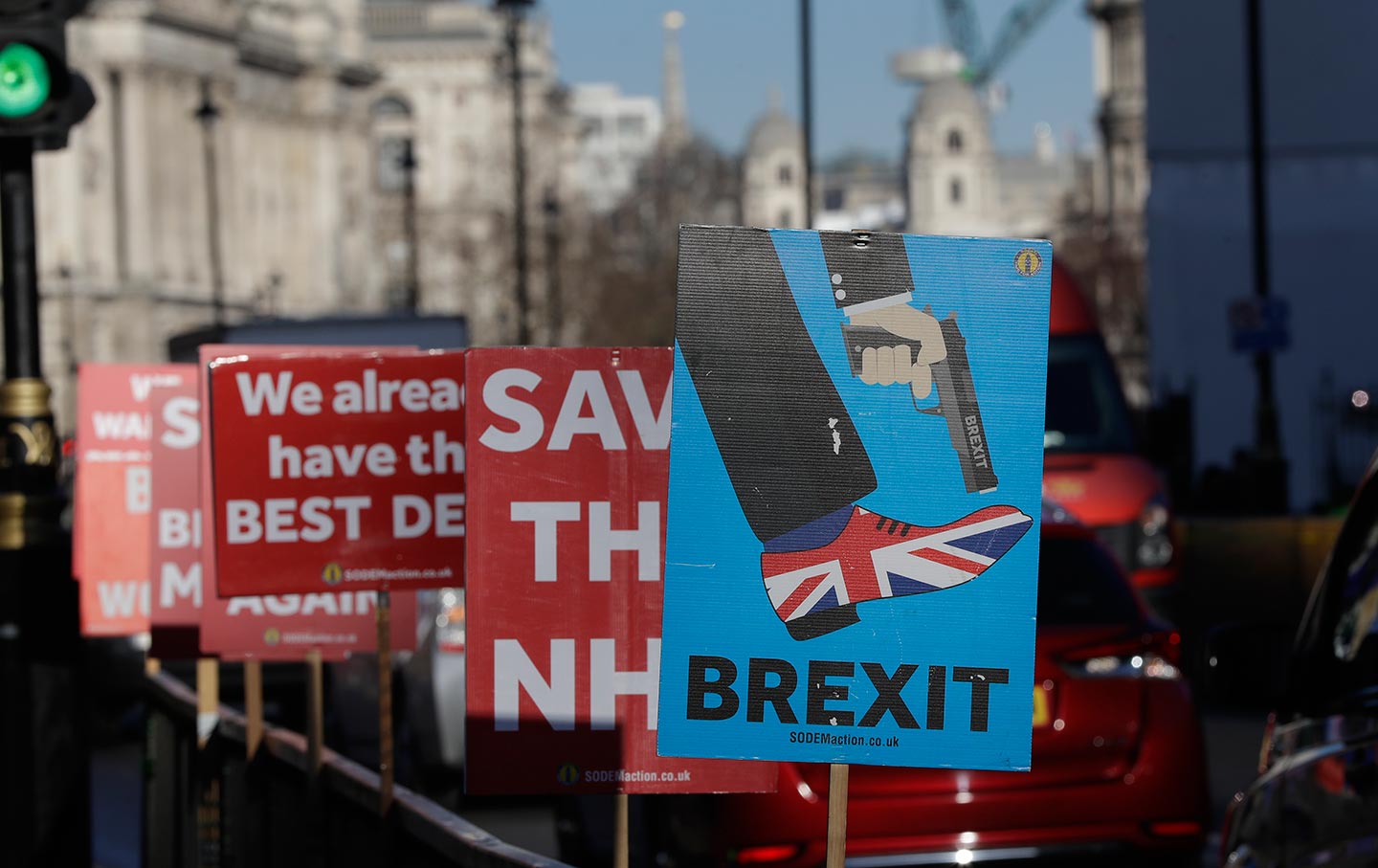 Brexit Has Made the UK a Laughingstock
The Nation,
(AP Photo / Kirsty Wigglesworth)

The scene outside Westminster these days couldn’t be more like a theme park devoted to English eccentricity if Basil Fawlty and Mr. Bean were doing a duet on Parliament Square. Tourists snap photos as people either draped in Union Jacks or waving European Union flags shout obscenities at one another. One woman carrying a sign—“The Bible says Britain’s future destiny is different to Europe’s”—is being asked to move on by police. Hovering nearby, a few hard-right “Leave” voters insist that if her sign had mentioned the Quran, the cops would have left her alone. Meanwhile, a man with a leave means leave banner adroitly dodges traffic, presenting an American dad with the unenviable challenge of explaining to his kids what Brexit is, or might be.

Inside the House of Commons, members of Parliament are struggling with that very question. On a day when Parliament voted on whether to extend the Brexit timetable or hold a second referendum altogether, MPs could be seen huddling in corridors, trying to figure out what to do. Ask those at the highest levels what they expect will happen next, and they answer with a shrug. Before the week was out, the House of Commons speaker—a nonpartisan role with an official dress code that includes knee breeches, buckled shoes, and a tricorne hat—had ruled that Prime Minister Theresa May could not put her twice-defeated Brexit deal before the House for a third time.

By the time this column is published, we will be barely a week away from the self-imposed deadline for Britain to leave the European Union, and the country’s political class is in a state of crisis. The Brexit referendum was called in a bid to settle a generation-long battle within the Conservative Party between nationalists and those who prioritize international capital. It’s the same fight that brought down Margaret Thatcher, crippled the government of John Major, and kept the Tories out of power for the next 13 years. But rather than ease the Tories’ internecine strife, Brexit has inflamed it.

May has spent the last two years seeking a deal with the EU that would unite her party more than the country, and she has failed horribly. With her withdrawal agreement rejected by historic margins, she has simply been running down the clock in the hope that she could spook wavering MPs into backing it. But Parliament has now voted to rule out a no-deal Brexit and extend the timetable for leaving the EU by at least three months.

In the meantime, Conservative Party discipline has broken down almost completely, with cabinet ministers voting against the government; in one instance, the Brexit secretary voted to defeat the government’s own Brexit motion. In December, more than a third of May’s party voted unsuccessfully to remove her. The rules dictate that they can’t try again for another year, but that doesn’t stop them from talking about it. For now, though, most in the party want May to remain, for two reasons: First, if she left, the leadership contest would splinter the Tories even further; and second, no one wants to assume responsibility for this mess.

Labour has its own problems. Nine of its MPs have left the party amid claims that it was insufficiently robust in its stance against Brexit and institutionally anti-Semitic to boot. (One of the defectors is Jewish.) Eight of them went on form the Independent Group, and three anti-Brexit Tories soon joined them. Given the left turn that Labour has made since Jeremy Corbyn was elected leader—and the antagonistic relationship he has with the parliamentary party—these defections were a long time coming. But for all that, the rebellion has been far smaller than most (including the defectors) had anticipated. After burning brightly at first, the Independent Group has fizzled for now (though it could easily flare up again). But at the moment, the appeal of a pro-austerity “Remain” bloc appears to be limited.

For all the talk of a grand political realignment in which the “centrists” of the two main parties join forces in a bid for national unity, the divisions thus far owe more to strategy than to principle. Despite the excitement around Parliament in the nation as a whole, the general mood outside Westminster is one of tedium. In the run-up to the Brexit referendum, then–Prime Minister David Cameron tried to convince his fellow Tories to push for staying in the EU by warning them that a Brexit vote would snarl up Parliament for years. “You don’t really want three years of Euro-wank, do you?” he allegedly said. If the report is accurate, this was perhaps Cameron’s shrewdest prediction. Two-thirds of the country believe they are not represented by the current parties. The political class is gridlocked and totally incapable of finding a majority for any Brexit option. But mostly, Conservative politicians just look incompetent: wholly unable to work in the national interest, saddled with a leader that few respect, and advocating for a plan that nobody seems to want. However, it’s not obvious that most of these disgruntled voters view their disaffection primarily through the lens of Brexit. With all the mainstream parties supporting membership in the EU during the referendum, Brexit has not so much created the rupture between the population and the political class as it has illustrated it.

Meanwhile, Europe looks askance, eager for Britain to stop negotiating with itself and produce a plan to which it can agree. During the referendum, the Brexiteers’ message was that leaving the EU would let Britain return to the global stage as an independent force to be reckoned with; instead, it has made the country a laughingstock, both on the continent and beyond.

After watching the negotiations between London and Brussels, the French EU minister Nathalie Loiseau reportedly named her new cat Brexit. “He wakes me up every morning meowing to death, because he wants to go out,” she explained to the French newspaper Le Journal Dimanche. “And when I open the door, he stays in the middle, undecided, and then gives me evil looks when I put him out.”

follow on twitter
@carysafoko @DavidHarewood @britishlibrary Spite. It’s my superpower
Very much looking forward to being in conversation with @DavidHarewood at the @britishlibrary in London on October… https://t.co/ccIdLj0jU8
RT @typemediacenter: For @BritishVogue's September 2021 issue, Type Fellow @garyyounge spoke with the Barbados Prime Minister @miaamormottl…
RT @immacReno: "You can be as brilliant, rich and accomplished and you will be quite often defined by just that one mistake if you're blac…
RT @meghanetinsley: New blog post on @RaceEDS: Our take on the removal of the last Confederate statue on Monument Avenue. @EthnicityUK @gar…
RT @DrFrancesRyan: Solidarity with Andrew Neil. We all go into journalism hoping to tackle the metropolitan elite but before you know it, y…
@elotroalex @dbatchak Thanks so much. I found it and really appreciate your help.
RT @BlackYouthProj: The Race & Populism working group is hosting a public dialogue about the role of people of color in building a new mult…
@jakeqmarshall Honoured @jakeqmarshall . Hopefully see you on Monday at this lecture on Black Lives Matter -… https://t.co/GmCvOPK3if
“Black Lives Matter: movement, moment, symbol, substance?” https://t.co/3vR1p9mEFZ
© Gary Younge. All Rights reserved, site built with tlc
Tadalafil online us Where can you buy cialis Buy valtrex online with free samples Antabuse buy Buy sildenafil generic online