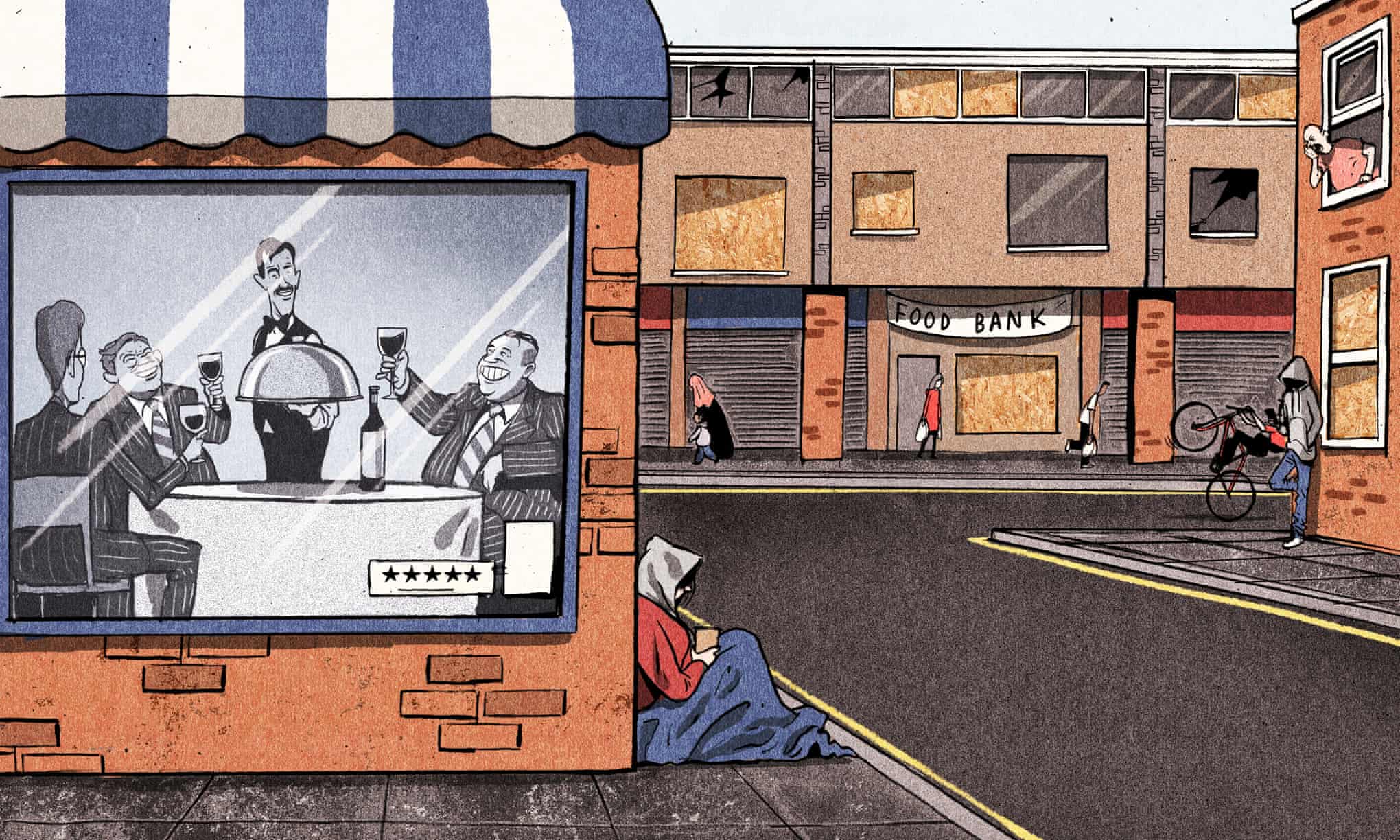 Britain is run by a self-serving clique. That’s why it’s in crisis
The Guardian,
Illustration: Ben Jennings/The Guardian

Last week Boris Johnson delivered a speech to a Royal Horticultural Society audience in Wisley, Surrey, before heading to the affluent village of Oxshott to buy some fennel and tarragon sausages and have a cup of tea in the Munch and Wiggles cafe. In a series of interviews later that day, he was unwilling to reveal the provenance of the staged photograph of him and his partner, Carrie Symonds. He was, however, able to insist that Britain would leave the European Union, “do or die”, by the end of October.

On the same day, the Sutton Trust and the Social Mobility Commission issued a report into elitism in Britain that “paints a picture of a country whose power structures are dominated by a narrow section of the population [where] social mobility is low and not improving”. Those who went to private school comprise 7% of the country’s population but 39% of the elite; those who went to Oxford or Cambridge university comprise less than 1% of the population but 24% of the elite. Senior judges, junior ministers, permanent secretaries and diplomats are among the least representative professions. But the media, and particularly newspaper columnists, are right up there, too.

There is a clear and undeniable link between the entrenched and calcifying class stratification in British society and the inept chaos in which we currently find ourselves. The gene puddle from which the elite siphons its ranks has become shallow and fetid. Those who make the laws in government, oversee the civil service that will implement them, adjudicate on them in court or assess them in newspapers, are drawn from such a narrow social layer that they might as well be the same person. Even when they do not form a majority, their critical mass is such that they set the tone, define the culture and shape the parameters for what is institutionally permissible.

This was never healthy and always absurd. But recently it has become untenable. The prime minister who got us into this Brexit mess a few years back went to the same school and joined the same supper club at the same university as the person who will most likely be prime minister in a few weeks’ time. Nobody thinks that is an uncanny coincidence. It’s how Britain works. It’s also why it’s not working.

“The country’s model of leadership is disintegrating,” wrote the Economist, not known for its Marxist tendencies, in December. “Britain is governed by a self-involved clique that rewards group membership above competence and self-confidence above expertise.” The overwhelming failure of integration in this country has nothing to do with Muslims or race – it’s that those who are running it, governing it and commenting on it have such a limited experience of living in it the way that most do. The consequences of that dislocation are proving devastating.

A brief caveat here to confront predictable straw men. Nobody should be blamed for being born rich or the school they go to – they had no say in it. Meanwhile, the handful of working-class people who make it to Oxbridge should be applauded for their achievement. At issue here is not individuals but a system that rewards privilege and privileges the rich – giving more opportunities, wealth and power to those who did not earn them, or have otherwise acquired them, while excluding others of access to resources. 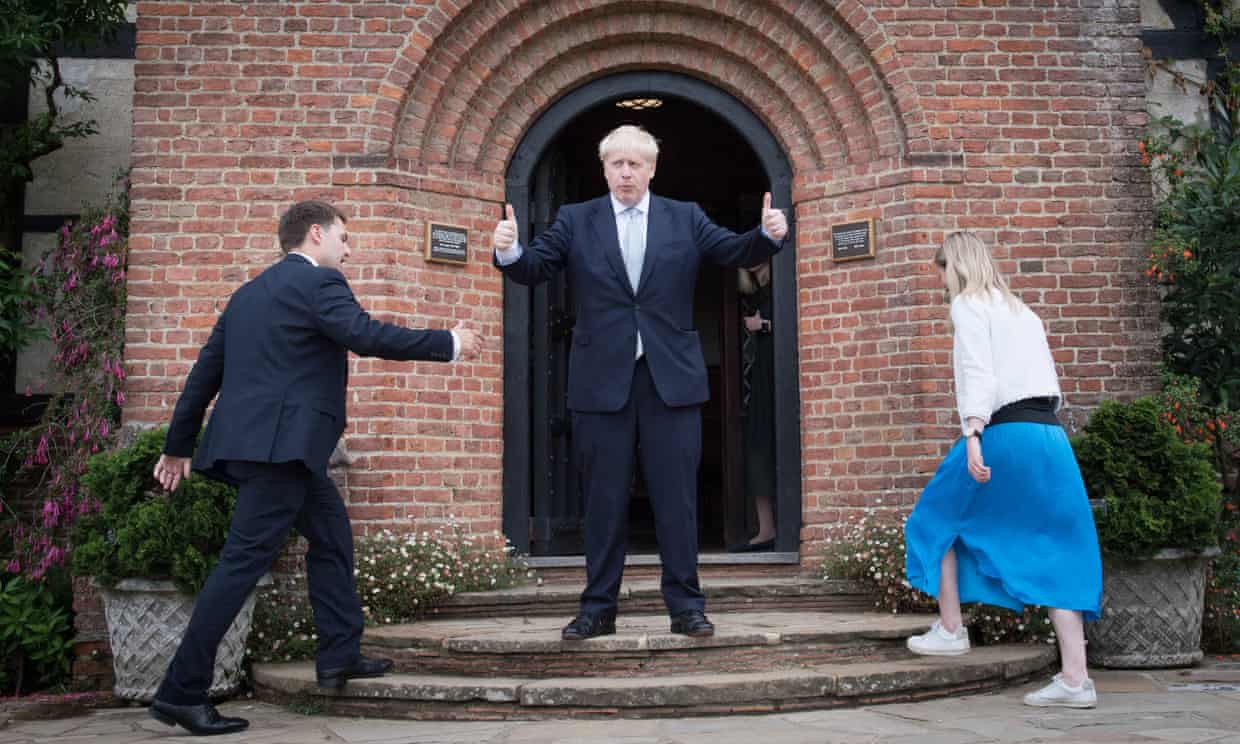 Boris Johnson during a tour of the RHS garden in Wisley, Surrey, on 25 June. Photograph: Stefan Rousseau/PA

Class privilege is not new. Between 1955 and 1964 all three British prime ministers went to Eton and Oxford. But several things have changed since then that make this persistent dominance of a tiny stratum particularly problematic. First of all, levels of income inequality have grown massively. According to the Equality Trust thinktank, between 1938 and 1979 the share of income going to the top 10% fell by 40%, while that going to the bottom grew a little. After 1979 that trend reversed sharply and has now effectively stalled. Real wages have yet to catch up with pre-crisis levels.

So the oligarchic tendencies in our economy are being reinforced and amplified in our polity and broader culture. The people who have everything also run everything. The Tory frontrunner, Johnson, is not just a product of that system but an advocate for it. When we see him call for a massive tax cut for the rich, we see a candidate who has had much and wants more. When we see him guessing the minimum wage “at or around £10” when it is in fact £8.21 we see a candidate who knows nothing about those who have little and has no interest in learning. (Imagine what would have happened to Diane Abbott had she made a mistake like that.)

Second, their increasingly desperate efforts to preserve their grip on power are having increasingly extreme consequences. We are in a period of extended crisis and division, largely brought about by financial elites whose reckless behaviour was first enabled and indulged, and then forgiven and written off, by political elites. It is highly unlikely that the imaginative and radical responses we need to turn this around are going to come from those same elites.

Brexit is simply the clearest manifestation of these crises. The race for Tory leader is the clearest illustration of how ill-equipped we are to deal with them. This party has won an outright majority just once in the last six elections and is about to elect its third leader in three years. The runaway favourite is an unrepentant race-baiter, liar, philanderer and opportunist, liked least by those who know him best. His opponent is just hopeless. The question of how long either will last in the top job is debatable.

Throughout this time media elites, drawn from the same class as their financial and political counterparts, have mostly been obsessed by the crisis in leadership in an ostensibly “unelectable” Labour party, which has had the same leader for four years – and gained seats and vote share in the last general election. Those media elites have called pretty much every major political event, from Brexit to the last two elections, incorrectly.

The point here is not about Jeremy Corbyn or partisanship – though it could be – but perspective and proportionality. One of the reasons why British politics is so difficult to understand at present is that most of those critiquing it are so deeply embedded and implicated in the world they are critiquing, they just can’t see straight. Which leads to the final point. Since the war Britain has come to think of itself as far more meritocratic. The current situation gives the lie to that illusion. If you think Johnson is the best person for the top job then you either know nothing about the job or you know nothing about him.

At Eton, notes James Wood in the London Review of Books, they were taught to impose themselves on the world with “effortless superiority”. But these people fall short too often. The trouble is they keep failing upwards – constantly given the benefit of the doubt, leaving them with the benefits and the rest of us with the doubts.