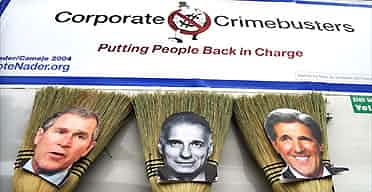 The few hours spent in Illinois offer a brief respite from the political advertisements that dominate the airwaves in the swing states. Once in Iowa they are back, with the soft rock and hardcore evangelism that form the staples across the country.

At the McDonald's in Mason City, Travis is struggling with the till while a customer waits for the change from his Chicken McGrill and double cheeseburger.

"How would you like to supersize your wages?" he asks, offering Travis a leaflet promising to raise the minimum wage from $5.15 to $10 (£5.56) an hour if Mr Nader is elected. Travis looks confused and goes back to the register.

After leafleting the mostly elderly customers and a few of Travis's colleagues, but getting little in the way of positive response, Mr Unzicker gives up and orders a strawberry milkshake. Leaving, he finds one of his leaflets torn up on the counter.

It's been a tough, frustrating and rather unproductive day for Mr Unzicker, who is working full-time trying to mobilise support for Mr Nader, the anti-war and anti-corporate crusader, in Iowa and Minnesota. Driving one of the campaign's 20 vans, he is coordinating the efforts in two swing states which the Democrat Al Gore won narrowly in 2000. This time John Kerry and George Bush are on 47% each; Mr Nader has 1%.

His efforts seem a sorry blend of hapless and hopeless. When he arrived in nearby Clear Lake his only contact there was out. In Mason City the man he was meant to meet was busy. The interview he had planned with the press was cancelled; the one he tried to arrange with another paper could not take place because it had not been planned far enough in advance.

"It's tough," he says. "Much tougher than in 2000. Back then the rallies were big and the support was energetic and enthusiastic. This time people are afraid. They think anything's better than Bush and that things are so bad they have to vote for Kerry. I think if we only have Bush and Kerry to choose from, things are even worse than they think."

Many Democrats still loathe Mr Nader, accusing him of handing the election to Mr Bush in 2000 by taking potential votes from Mr Gore. Their contempt has intensified since he decided to run again and took money from prominent Republicans to do so. In the past year they have tried every possible legal means to keep him off the ballot in each state, advising Democrats not to sign his petitions and challenging the signatures he does get.

Michael Frisby, the communications director of the Stop Nader campaign, says: "The point is not just to keep him from getting on the ballot, but to make him spend money and time in all of these places so he has less money and time to spend getting votes."

Last week Mr Nader was removed from the ballot in the important swing state of Pennsylvania, many of the signatures he had submitted judged to be either duplicated or fraudulent. Last night, that decision was upheld by the supreme court. But he remains in contention in 30 states, including six swing states where polls indicate he has greater support than the thin margin between Mr Bush and Mr Kerry.

On Monday he announced a planned 10-state campaign swing before election day, with Iowa and Minnesota on the list.

His campaigners point out that Mr Bush took far more votes from Democrats in 2000 than Mr Nader did. They relate tales of intense hostility from Democrats with a mixture of pride and bewilderment.

"I have friends who have said, 'Don't talk to me until after the election,'" Mr Unzicker says. "One family member asked me not to park the van in front of his house." But his efforts suggest the Nader campaign has more or less collapsed - a leader without an army is caught in an increasingly vicious electoral war.

Calls to state representatives in vital states suggest a moribund list of supporters but no signs of active life. Unlike 2000, when Mr Nader had the Green party to campaign for him at the grassroots, he is on his own, backed by just a small band of loyalists including Mr Unzicker.

"It's not really a movement," says Leighton Christiansen, the Nader coordinator in Iowa City, a small, bustling student town. "It's hard to sustain momentum."

Mr Christiansen had no definite plans for more campaigning before the election. In 2000 Mr Nader did well among students, but last week no one could be found to support him at a student debate.

Last month Mr Nader went to the Iowa City campus and attracted a crowd of 450. "It was a great event," says Mr Christiansen, a truck driver. "But it didn't really translate into anything."

He hands me a list of possible Nader voters, people who expressed an interest in joining the campaign after the meeting. Beth Straeder, 20, the only one to return my calls, cast her vote early for Mr Kerry.

"I liked what he had to say about healthcare, the war and the minimum wage. Nader is my ideal candidate. But Kerry would not appoint justices to the supreme court who would impact on abortion rights, and I decided that was more important to me."

"A lot of sophisticated leftwing voters made the assumption that Bush would govern as a moderate-to-rightwing conservative," says John Nichols, a columnist for the leftwing magazine the Nation. "They underestimated his extremism; they underestimated how much influence people like Dick Cheney and Paul Wolfowitz would have. They didn't understand him then, and wanted to send an important message to the Democrats.

"But they understand him now."

Many of Mr Nader's most prominent supporters, including the film-maker Michael Moore, the academic Noam Chomsky and the campaigning journalist Barbara Ehrenreich, have called on him to stand down. His running mate from 2000, Winona LaDuke, is backing Mr Kerry. At the university in Ames, Iowa, on Sunday, the film-maker called on students to turn their back on Mr Nader and support Mr Kerry. He drew a crowd of 7,500.

But despite the lack of endorsements and support Mr Nader continues to scrape one or two per cent in the polls.

The presumption these votes would necessarily go to Mr Kerry is precisely that - a presumption. "I probably wouldn't vote," Mr Christiansen says, when asked whom he would support if Mr Nader were not on the ballot. "Both parties represent the same interests, and if we are going to have progressive change we will need to break people from the Democratic party."

Mr Nichols believes Mr Nader's role as a spoiler in this election has been exaggerated. "There is not a single person in America who is going to vote for Nader who desperately wants to get rid of Bush.

"No one at this stage is going to vote for Nader instead of John Kerry. In every election a third-party candidate will get at least one or two per cent of the vote, and this year Nader's that candidate."

But Charles Cook, a political analyst in Washington, told the Los Angeles Times: "Nader could get a half, or a third, or a fifth of the vote he got last time - and be decisive again."

Mr Christiansen says if he wakes up on November 3 to find Mr Bush the victor, he won't regret a thing. And if Democrats blame him for a Bush victory, what will he tell them?