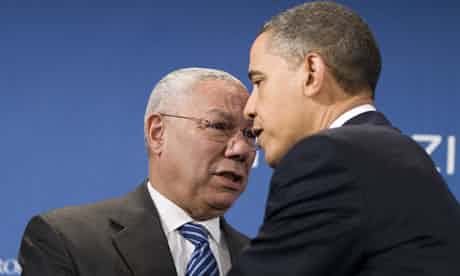 Colin Powell's endorsement: less a vote for Obama than a vote against Romney
The Guardian,
Photograph: Jim Watson/AFP/Getty Images

Colin Powell's endorsement of Barack Obama won't swing many votes. It has come too late to an electorate too divided and in an atmosphere too poisoned to even be heard properly, let alone persuade anyone. (Though, were he to stump for Obama in Virginia's military towns, he might make some waves.)

Since Powell endorsed Obama in 2008, it is not a surprise. And the endorsement he gave this time this time around was sound but not soaring.

"I think, generally, we've come out of the dive and we're starting to gain altitude," he told CBS's Good Morning. "It doesn't mean all our problems are solved."

While it may not be decisive, it is nonetheless indicative. For Powell is a Republican without a party. The man who sold the Iraq war to the United Nations as George W Bush's secretary of state is no liberal. He has not yet left the party with which he has identified for much of his adult life, but clearly, he feels that it has left him:

"I think I'm a Republican of more moderate mould and that's something of a dying breed, I'm sorry to say. But, you know, the Republicans I worked for are President Reagan, President Bush, the Howard Bakers of the world, people who were conservative, people who were willing to push their conservative views, but people who recognize that, at the end of the day, you got to find a basis for compromise. Compromise is how this country runs."

Romney was once of a similar breed. It's actually the breed he's been trying to emulate most recently, and which has served him so well as he distances himself from the reactionary demagoguery of the primaries and seeks to present himself as more reasonable, considered candidate – who is not a "severe" conservative but a compassionate one.

Claims that Powell is only supporting Obama "because he is black" are as reductive as they are ridiculous. If race were the sole or even principal guide for his politics, Powell wouldn't have been among the handful of black Americans who supported the Ronald Reagan of "welfare queens" or the Bush senior of Willie Horton infamy.

Powell left the George W Bush administration disaffected at the impact of neoconservatives on foreign policy and the general drift towards the right on social and economic policy, saying also that his presentation in favour of the war at the UN had left "a painful blot" on his record. The Republicans have only got more rightwing since then, and many of those who advised Bush are now on Team Romney.

While Powell professed the "utmost respect" for Romney, he nevertheless sees him conflicted between the demands of his conservative base and the those of the real world, saying:

"The governor who was speaking on Monday night at the debate was saying things that were quite different from what he said earlier. I'm not quite sure which Governor Romney we would be getting with respect to foreign policy. I don't sense he's thought through these issues as thoroughly as he should have. He gets advice from his campaign staff that he then has to modify as he goes along."

The Romney who ran Massachusetts as governor might have chosen Powell as a running-mate. Powell might even have accepted. But that Romney only exists in its most fleeting, Etch-a-Sketchiest form.

The party Powell identifies with is the one Romney's father, George, tried to defend at the ultra-conservative convention that nominated Barry Goldwater. Back then, Gerald Ford symbolically nominated George from the floor, with the praise:

"He has never let the temporary glitter of expediency obscure the path which his integrity dictated he must follow."

No one could ever say that of Romney. The context may change but the notion that a candidate should stand for something other than office remains. Lacking a Sister Souljah moment during which he might have taken on his own side, Romney has shown himself to be a prisoner to his increasingly eccentric and extreme base. Whether it's GOP Senate candidates Richard Mourdock and Todd Akin disparaging rape survivors, Rush Limbaugh referring to Georgetown student Sandra Fluke as a "slut" and a "prostitute" after she spoke in support of mandating insurance coverage for contraception, or Donald Trump demanding Obama's college transcripts, Romney has chosen polite distance over forthright denunciation, preferring to cajole than confront.

Before he walked out of the 1964 convention, George Romney said:

"There is no place in either of our parties for the purveyors of hate."

Powell's endorsement of Obama signals that we are a step closer to seeing the extinction of a breed for which there is clearly a market, but which Republicans are no longer keen to produce.

follow on twitter
RT @BernardineEvari: Please follow the groundbreaking online #MuseumofColour UK, founded by the unstoppable Samenua Sesher. The 1st gallery…
RT @EthnicityUK: Gary Younge is interviewed by @sonikkalogan about his work on racism and gun violence in @the_hindu #DataPoint podcast. h…
RT @thefreedomi: 🚨 NEW: Saudi women’s rights activist & academic Salma al-Shehab was sentenced to 34 years in prison + 34 year travel ban f…
RT @LRB: #DawnFosterForever! On Thursday 15 September at the @LRBbookshop, @BizK1, @piercepenniless, Lynsey Hanley and @garyyounge will d…
RT @ShowunmiV: This is how we support Black women and girls https://t.co/8YmgV21zHo
RT @sonikkalogan: It's #DataPoint Pod Thursday! In this week's episode, I talk to @noraneus, @garyyounge and @Casey_J_Wooten about the U.S.…
RT @bgnoiseuk: Next month, @LRBbookshop will host an event to celebrate the life and work of Dawn Foster with @BizK1, @piercepenniless, Lyn…
Help me Twitter. The quote: ""You can cut all the flowers but you cannot keep Spring from coming." is most commonly… https://t.co/Xs7JkiOEd5
RT @the_hindu: #DataPoint | This Thursday, @sonikkalogan takes a look at the #US gun violence epidemic, as mass shootings continue to grow…
City workers get double-digit wage rises while lowest-paid see 1% increase - “Them’s the breaks” https://t.co/XeVyG72iA5
© Gary Younge. All Rights reserved, site built with tlc
What do i need to buy cellcept How much does vaniqa cost per pill Adcirca best buy Geodon sales How to order cefzil online Where can i buy stendra over the counter usa Buy real prandin online What i should buy with tarceva Transdermal verapamil 15 gel cost Buy antabuse