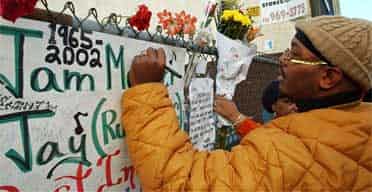 Cops and rappers
The Guardian

In New York, the home of hip-hop, rap is a serious business. This is the city that is home to the place (Sugar Hill, Harlem) that produced the group (the Sugar Hill Gang) that produced the record (Rapper's Delight) that made rap so mainstream that, more than 20 years later, the track would provide the inspiration for The Ketchup Song. Not only does rap generate a huge amount of money for a small number of artists and entrepreneurs, but it has also managed to elevate itself beyond the status of a music genre to the level of a viable modern state. New York is the capital of the hip-hop "nation", which is ruled by the hip-hop "generation", whose turf wars are resolved at hip-hop "summits", during which the hip-hop "community" get together to promote and protect hip-hop "culture".

In a book published this week, called The New HNIC: The Death of Civil Rights and the Reign of Hip-Hop, Professor Todd Boyd, a hip-hop "academic", argues: "You might get a better read of what's going on in the world of black people today by listening to DMX on It's Dark and Hell Is Hot than by listening to repeated broadcasts of Martin Luther King speeches."

And now, it seems, this self-styled state has got its own police force. The New York Police Department has assigned a team of detectives to patrol the hip-hop nation - studying songs, scrutinising artistic battles, visiting clubs and monitoring business feuds. Last November Lt Brian Burke, a police spokesman, told the New York Times that, following the murder of Jam Master Jay, the DJ for Run-DMC, the team was looking for leads in the lyrics, rhymes and criminal connections in the world of rap. Jay was shot in the head on Wednesday October 30 as he sat on a sofa in the lounge of a recording studio in Queens.

When not covering specific cases, the team of six officers act as police liaisons with both the hip-hop world and detectives covering a similar beat in California and Florida. Rappers are rarely found alone, preferring instead to travel in "crews", and the detectives also keep track of these entourages, going on alert when two sets of rivals are in town at the same time.

Wary of accusations of racial profiling in a city where four African-Americans were shot by police within the first two days of the year, the NYPD is eager to point out that this is not a unit dedicated to hip-hop. "We have a team, within the intelligence unit, that monitors the music industry," said a spokesman. "They deal with the music industry as a whole."

But if the past week is anything to go by, it's not country singers that are drawing most attention. Scarcely two hours into the new year, rapper 50 Cent, once a protege of the late Jay, was arrested with four other men after police found two loaded guns in their Jeep. Two days later, federal agents raided the offices of rap mogul Irv Gotti, investigating his connections with a convicted drug dealer. On Monday, one of hip-hop rapper Lil' Kim's entourage was sentenced to five years' probation following the wounding of an unarmed man in Brooklyn 18 months ago.

In New York this is business as usual. While the moral panic following the murders of two young women in Birmingham has already convicted rap music as an accomplice in their tragedy, the recent arrests, raids and sentencing here have scarcely raised an eyebrow - only the hip-hop academic made the front pages.

This is not a particularly comforting fact. It suggests a society, if not a nation, in which the connections between criminality and culture have become banal and where most have become inoculated against any indignation at the fact that those links exist. Hysteria at the suggestion that rap was responsible for wrongdoing is preferable to indifference in the face of definite evidence that it is.

Certainly, rap, much like, say, capoeira, is adversarial in its nature - a means of battling (with lyrics) without bruising. Every Friday on Black Entertainment Television - the cable channel where former Senate leader Trent Lott asked African-Americans for forgiveness - two challengers face off in a 30-second freestyle rap contest. "Any battles I was involved in were purely rap battles," recalls LL Cool J. "It was just about the art and the sport of hip-hop. It was no different from Michael Jordan trying to dunk on Pat Ewing."

Place all this in a country where black men are six times more likely to be murdered than whites and where one in three young black men are either in jail, on parole or on probation, and you have a potentially explosive cocktail. "I'm in favour of stopping crime, not of a government's need to deflect away core issues by finding scapegoats, and that's all the NYPD is doing," says Tee Max, editor of an email newsletter on hip-hop affairs called State of Independence.

Hip-hop has always drawn much of its creative energy from the underworld. Take the names of the record labels - Death Row, Murder Inc, Bad Boy - or the style: wearing trousers that fall from the waist comes from prison, where inmates are not allowed to wear belts. If American legislators were serious about stopping the violence associated with rap music, they might start with the gun laws and penal system that create the reality reflected in the lyrics.

"America," says rapper Jamal "Shyne" Barrow, "I am just what you made me. Young. Black and fucking crazy." But while it is true that America did not give Shyne many options, no more did it make him take a gun into a New York nightclub three years ago and fire it, seriously injuring innocents, for which he was sent to prison for 10 years. Nor did it make Sean "Puffy" Combs beat a producer senseless with a champagne bottle, or the late Tupac claim in his lyrics that he slept with Notorious BIG's wife.

Rap does not simply reflect the faults of American society, it also impacts upon them and, all too often, compounds them. Nowhere is this more readily acknowledged than within the hip-hop community itself, which has a vocal reformist wing. These are people who love the music but hate the violence and misogyny and, unlike the occasional censorious legislator, have credibility with their audience. Public Enemy's Chuck D is constantly calling on rappers to live up to their potential rather than down to expectations. "Hip-hop has got to look itself in the mirror. It is fomenting too much negativity out here," he says. "My attitude is that hip-hop and rap can go to hell if they don't help us progress as a people. On the island of Dominica, they didn't have our kind of violent crime until they could get Black Entertainment TV."

It is precisely for this reason that so many African-American politicians and civil rights leaders are so keen to engage with the hip-hop community. They understand what so many of rap's critics refuse to acknowledge - that its power to influence could be harnessed to great, positive effect.

"There is a major struggle in rap between capitalism and radical dem-ocratic politics," says Manning Marable, a professor in the African-American department at Columbia University. "Until now, the corporations have been winning that struggle." Which side the NYPD will find itself on, and with what results, remains to be seen.

follow on twitter
RT @BernardineEvari: Please follow the groundbreaking online #MuseumofColour UK, founded by the unstoppable Samenua Sesher. The 1st gallery…
RT @EthnicityUK: Gary Younge is interviewed by @sonikkalogan about his work on racism and gun violence in @the_hindu #DataPoint podcast. h…
RT @thefreedomi: 🚨 NEW: Saudi women’s rights activist & academic Salma al-Shehab was sentenced to 34 years in prison + 34 year travel ban f…
RT @LRB: #DawnFosterForever! On Thursday 15 September at the @LRBbookshop, @BizK1, @piercepenniless, Lynsey Hanley and @garyyounge will d…
RT @ShowunmiV: This is how we support Black women and girls https://t.co/8YmgV21zHo
RT @sonikkalogan: It's #DataPoint Pod Thursday! In this week's episode, I talk to @noraneus, @garyyounge and @Casey_J_Wooten about the U.S.…
RT @bgnoiseuk: Next month, @LRBbookshop will host an event to celebrate the life and work of Dawn Foster with @BizK1, @piercepenniless, Lyn…
Help me Twitter. The quote: ""You can cut all the flowers but you cannot keep Spring from coming." is most commonly… https://t.co/Xs7JkiOEd5
RT @the_hindu: #DataPoint | This Thursday, @sonikkalogan takes a look at the #US gun violence epidemic, as mass shootings continue to grow…
City workers get double-digit wage rises while lowest-paid see 1% increase - “Them’s the breaks” https://t.co/XeVyG72iA5
© Gary Younge. All Rights reserved, site built with tlc
Can i buy cellcept Arava 2 0mg online Get pamelor online Buy real prandin online Online pharmacy vasotec Generic azilect online Using jardiance and janumet together Celebrex online india Where can i buy mobic Buy valtrex online with free samples