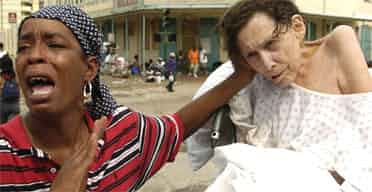 Criticism of Bush mounts as more than 10,000 feared dead
The Guardian

As thousands of people sat on the streets of New Orleans, having spent their fourth day waiting to be rescued, the city fell deeper into chaos, with gangs roaming the city and corpses rotting in the sun.

Kathleen Blanco, the Democrat governor of Louisiana, threatened looters with a shoot-to-kill policy.

"These troops are battle-tested. They have M16s and are locked and loaded," she said. "These troops know how to shoot and kill and I expect they will."

Plumes of thick black smoke rose after an explosion rocked an industrial area hit hard by Katrina and an apartment complex in the city centre was also in flames. The explosion was later said to have taken place in a chemical storage facility.

Stunned residents stumbled around bodies that lay rotting and untouched.

Others trudged along flooded and debris-strewn streets toward the Superdome football stadium where they hoped to be bussed to safety.

Calling for the immediate deployment of regular combat troops in New Orleans, David Vitter, a Louisiana Republican senator said: "My guess is that it [the death toll] will start at 10,000, but that is only a guess." He said this estimate was not based on any official death toll or body count.

Even before he set off, Mr Bush was forced to admit that the relief effort had been inadequate: "The results are not acceptable," he said.

Later he said: "I am not looking forward to this trip. It's as if the entire Gulf coast were obliterated by the worst kind of weapon you can imagine."

An emergency military convoy of aid supplies arrived in New Orleans yesterday to help in the relief of tens of thousands of refugees made desperate in the aftermath of the hurricane.

Live television broadcasts showed a queue of military vehicles loaded with crates making their way through the flooded streets. Troops with rifles rode in the convoy.

In another sign of aid finally getting through, commercial aircraft carrying supplies were arriving at an increased rate of four per hour at New Orleans international airport, the department of transport said.

The planes were evacuating displaced residents and would continue until evening.

New Orleans has descended into anarchy since it was devastated by Katrina on Monday.

Standing alongside the Republican governors of Alabama and Mississippi at his first stop in Mobile, Alabama, Mr Bush said: "We have a responsibility to clean up this mess. What is not working right, we're going to make it right." He then went on to Biloxi, Mississippi, where he spoke to victims before heading to New Orleans.

Yesterday the US Congress broke away from its holiday to implement a $10.5bn (£5.6bn) aid package, while the Pentagon promised 1,400 national guardsmen a day to stop looting in the city.

But these moves did little to quell the mounting anger of the hurricane's victims and local officials, particularly in New Orleans.

At the increasingly unsanitary convention centre, the crowds swelled to about 25,000 as people sought food, water and attention, while dead bodies lay in wheelchairs or wrapped in sheets both inside and outside the centre. At the city's Charity hospital, the dead were stacked up on the stairways. New Orleans airport was transformed into a huge field hospital, with fleets of military and coastguard helicopters ferrying the sick for treatment.

Ray Nagin, the mayor of New Orleans, broke down in tears on Thursday during an interview on local radio, saying that federal officials "don't have a clue what's going on".

"I keep hearing that this is coming, that is coming," he said, referring to federal aid. "And my answer to that today is ... where is the beef?

"Let's figure out the biggest crisis in the history of our country," he continued. After September 11, he said, the president had been given "unprecedented powers" to send aid to New York.

The same response should be applied in this case, too, he said. "Get off your asses and let's do something."

At a news conference in Washington yesterday, the Congressional Black Caucus criticised the rescue effort and the failure to assist many of the mostly poor and black victims. "I'm ashamed of America. I'm ashamed of our government," said a Democrat congresswoman, Carolyn Kilpatrick, from Michigan. "I'm outraged by the lack of response ..."

The director of the Federal Emergency Management Agency, Michael Brown, defended his record, but said he understood the irritation.

He said there was "a continuous flow of commodities", into the Superdome in New Orleans, where thousands of people are taking refuge in crowded conditions.

Lieutenant General Steven Blum, chief of the National Guard Bureau, said 2,600 further national guardsmen would be deployed by tonight, bringing the total number of troops in New Orleans to 7,000.

"We understand the recovery is not going to be an overnight recovery," he said. "This is a catastrophe of enormous magnitude."

The additional troops would be getting into areas that were previously inaccessible. Asked why the civil unrest continued, Gen Blum said: "There are not enough police and soldiers to be everywhere all the time."

But as troops arrived yesterday they were told to point their guns downward, to avoid any comparison with Iraq.

The movement of thousands of refugees from the Superdome to the Astrodome in Houston was halted late on Thursday, after it was feared that the Astrodome was becoming a fire hazard. They are being transported to other shelters in Houston.

follow on twitter
#ff @GetNewswise, whose recent evaluation bore testament to its brilliant work in helping to create critical citize… https://t.co/t9iIlZaC2V
@DoubleDownNews I was partly quoting @MichaelRosenYes here and his brilliant poem. It’s a pity that’s not clearer
RT @GetNewsWise: This year making sense of news has been more important than ever. So proud to show how we strengthen children's critical s…
RT @NesrineMalik: 'The US is on its way to becoming an authoritarian state. That requires a radically different kind of journalism that doe…
RT @GretchenTG: Just so I'm being honest. #SciMomJourneys https://t.co/4yZMKtVxwP
RT @ZGrados: Nuestro redactor @angelgmnz nos trae la reseña de 'Diez jóvenes más', libro periodístico de @garyyounge denunciando el mundo d…
RT @Blackgermans: Afro-German Women are Still Upholding the Legacy of May Ayim https://t.co/Rgx5H3UK1J
RT @BerniceKing: There is no form of protest against racism that is acceptable to racists.
RT @clairecohen: Ladies, we have a winner #Mansplaining https://t.co/Wxvmnx0Kt7
RT @NesrineMalik: Everyone who doesn't follow you on here is cancelling you.
© Gary Younge. All Rights reserved, site built with tlc