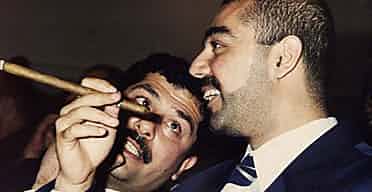 Dead: the sons of Saddam
The Guardian

The deaths of Saddam's two fugitive "princes" represent the biggest coup for coalition forces since the fall of Baghdad more than three months ago. It offers Washington and London hope of a turning point in a bloody guerrilla war.

At a late-night press conference in Baghdad, General Ricardo Sanchez, the commander of ground forces in Iraq, said: "We are certain that Uday and Qusay were killed today. We have used multiple sources to identify the individuals."

It was reported last night that photos were taken of the dead men's faces and sent to Baghdad where they were identified by Saddam's private secretary, among others.

Saddam's sons, together with another man and a young boy, had barricaded themselves inside the home of a Mosul businessman, thought to be a distant relative, and put up fierce resistance. Gen Sanchez said the entire operation took six hours.

"They died in a fierce gun battle. They resisted the detention and the efforts of the coalition forces to apprehend them. They were killed in the ensuing gunfight," he said.

The US army promised conclusive proof of the deaths today, possibly by presenting photographs.

General Sanchez said the raid on the house followed a tip-off from a local informant. "We had a walk-in last night that came in and gave us the information [about where they were hiding]," he said.

Gen Sanchez added that it was likely that the $15m (£9.4m) reward on each of their heads - for information leading to their discovery - would be claimed. "We are pursuing that at this point in time. That will probably happen," he said.

The deaths of Saddam's sons will come as an immense relief to the US and British governments, which have been under sustained attack for justifying the invasion with questionable intelligence.

The elimination of Uday and Qusay will provide a temporary distraction from the intelligence scandal. Iraq analysts said their deaths could sap the morale of guerrilla groups fighting for the restoration of the Hussein dynasty.

As news filtered out in Baghdad last night, the sky erupted in tracer fire. "It's celebration. People have heard about what happened," a US military spokesman said.

The US civilian administrator in Iraq, Paul Bremer, said the celebrations showed "how important this is in meeting the real desires of the Iraqi people to be rid once and for all of Saddam, his sons and his odious regime".

Also among the dead from yesterday's gunfight was a teenage boy. Pentagon officials suggested he could be Qusay's 14-year-old son, who is known to travel with him. The fourth body was thought to be a bodyguard or aide. The remains were flown out of Mosul for DNA tests, but Gen Sanchez said he was confident the bodies were sufficiently recognisable to be positively identified.

"Iraqis are always telling me that the Iraqi people will never truly believe the regime has changed until they see the bodies. Well, here are two of the bodies," said Peter Galbraith, an Iraq expert and a former US ambassador.

In the pack of cards distributed to US troops to identify wanted members of the old regime, Qusay, the 37-year-old former intelligence and special forces chief was the ace of clubs. Uday, two years older with the reputation of a sadistic playboy, was the ace of hearts. Saddam, the ace of spades, is still at large.

The foreign secretary, Jack Straw, welcomed the news yes terday saying: "Uday and Qusay Hussein shared their father's responsibility for the many years of suffering by the Iraqi people."

After receiving the informant's tip-off, soldiers from the 101st Airborne Division and Task Force 20, a special forces group leading the hunt for senior regime officials, went to a mansion in al-Falah neighbourhood in north Mosul, the home of a wealthy building contractor, thought to be a cousin of Saddam.

The informant had reportedly been watching the two men for some time and was able to tell the Americans when they were likely to be in.

An Iraqi journalist said a firefight began yesterday morning when US troops tried to search the businessman's home. When gunfire erupted from in side the Americans called in air support, marking the beginning of an intense shoot-out, which is thought to have lasted three hours, involving anti- tank weapons, grenade launchers and small arms.

One soldier involved in the battle said US forces could not get into the building because of small arms fire, so "we had to use bigger calibre weapons to render the building safe".

Witnesses said the two-storey building was left charred and smouldering, its facade riddled with holes from bullets and heavy weaponry and its roof caved in after it was apparently hit by a missile from helicopter gunships.

An Iraqi teenage boy was also killed in the crossfire, and several Iraqi civilians were wounded. One US soldier was shot in the chest but was said to be in a stable condition.

The US defence secretary, Donald Rumsfeld, briefed President George Bush about the operation. The death yesterday of the 39th US soldier from hostile fire since Mr Bush declared the conflict to be over on May 1 highlighted the pressure that his forces are under.