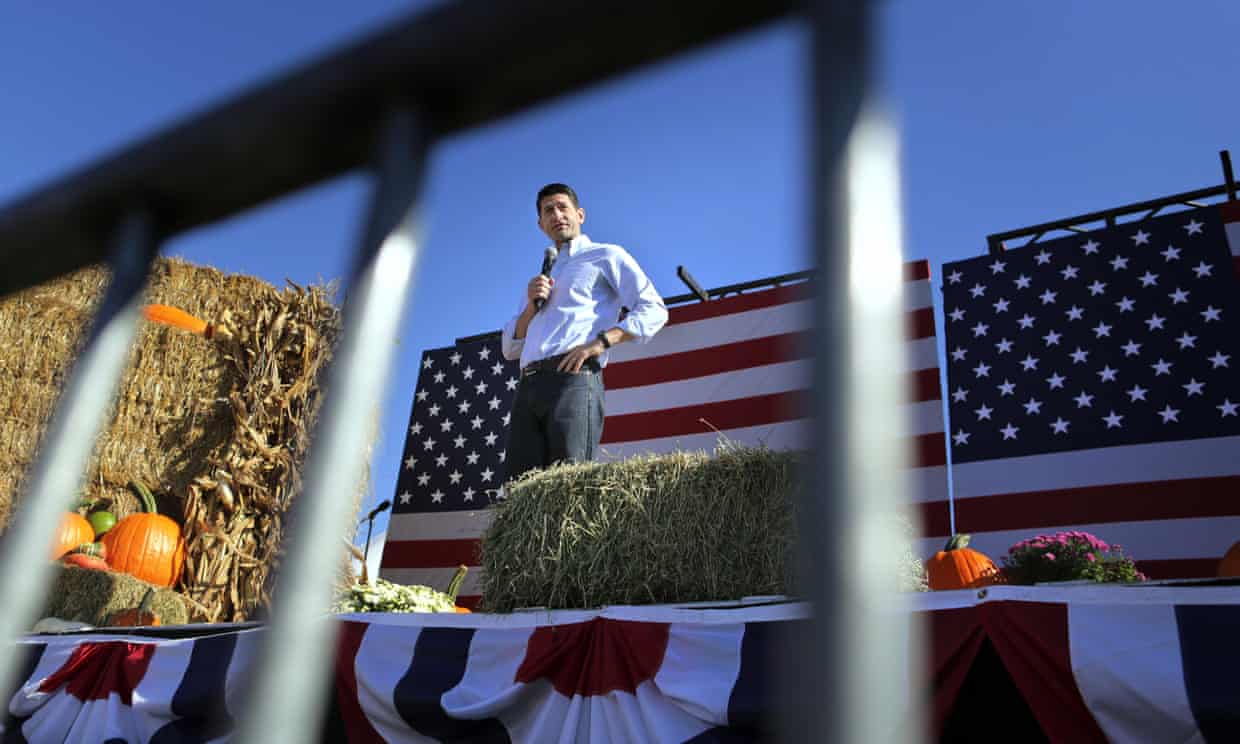 When I checked in at Heathrow for my flight to Racine, the woman helping me tag my bags asked the purpose of my journey. When I told her I was going to cover the midterm elections she asked: “Do you think it’ll make any difference? He just does what he wants.”

Then she leaned in conspiratorially and whispered: “I think he’s mad.”

When I later told the American immigration officer at Chicago O’Hare about my plans, he sighed: “Oh, it’s time for that circus again!” and waved me through. At the car rental counter, the assistant just laughed. “I won’t tell you what I think,” she said, shaking her head. “I’m not sure I even have the words.”

The 90-minute drive from O’Hare to Racine is a straight run from suburb to farmland from Illinois (“Land of Lincoln”) to Wisconsin (“America’s Dairyland”) until you reach the county road and then head east past fields of pumpkin and corn to Lake Michigan. Racine sits on the western banks of the lake – a former manufacturing town which, at first sight, seems to have managed better than most such places. Evidence of its post-industrial status abounds in former factory buildings and manufacturing sites; but many have been repurposed. Downsized but not derelict, it’s a rust belt town without too much rust.

“It’s a working-class town where there’s not a lot of work,” says Angelina Cruz, a teacher and union organiser. “And the work there is tends to be service work that doesn’t pay well and doesn’t have great benefits.”

The area took a hammering during the recession with unemployment, at one stage, reaching 12% in the city and property prices nosediving. But while the local economy has recovered, sending rents rocketing, wages have not kept pace. Today unemployment stands at 7% while around one in five live below the poverty line. According to the census the median family income has effectively remained stagnant for the last six years.

But there is Racine city and Racine county. The city is poorer (median income $41,178), diverse (50% white, 23% black, 22% Hispanic) and Democratic. The county as a whole is wealthier (median income $69,000), less diverse (73% white, 11% black and 12% Hispanic) and Republican. It is the interplay between the two that makes the county as a whole a bellwether for the state and the nation as a whole.

“We have two Racines,” says Kelly Gallaher, a retired teacher. “We have a beautiful place to live and wonderful, wonderful people. We’re 25 minutes from Milwaukee and an hour on the train from Chicago. We have great diversity. But when you look under it you see that there are problems we’re not addressing. 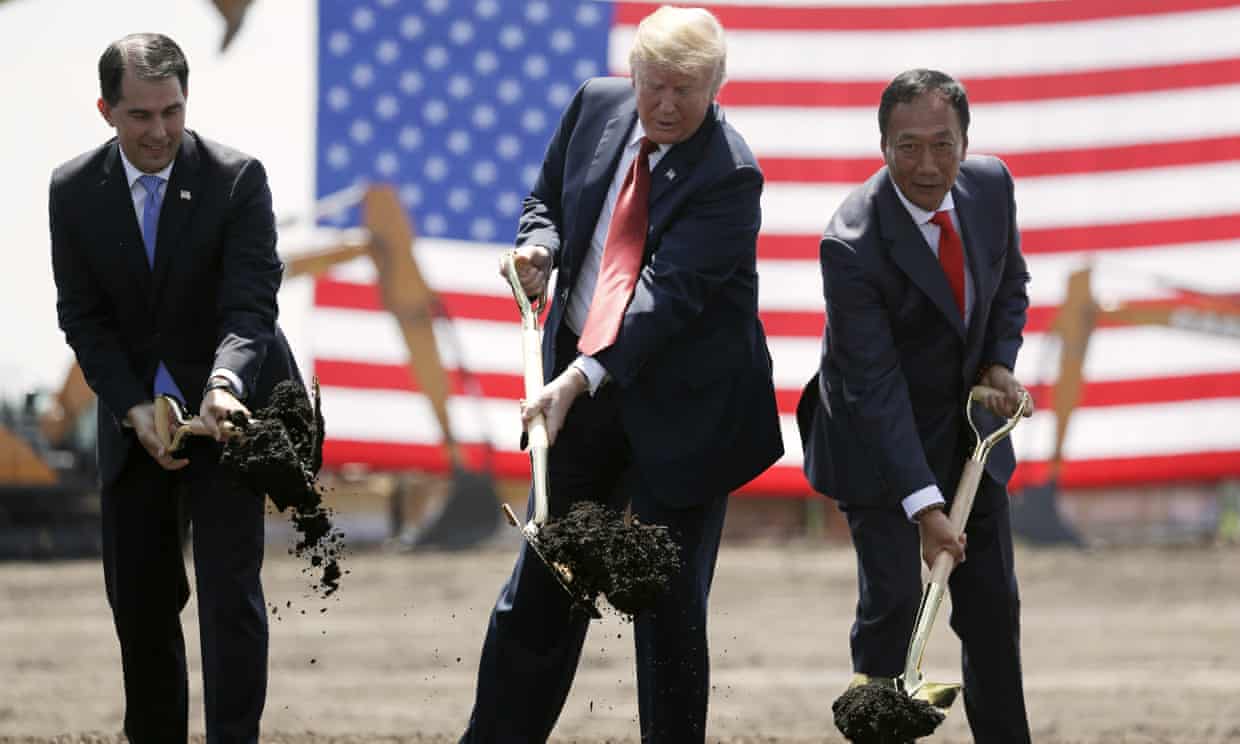 “You can find yourself a job, but it’ll pay $9 an hour and at the same time there’s no housing to buy and no housing to rent. Wisconsin has the worst achievement gap between black and white children in the country and Racine is up there in the top three cities within Wisconsin.”

Over the summer Immigration and Customs Enforcement (Ice) launched a series of raids that led to detention of several local people, including Ricardo Fierro, the former local director of the Hispanic Chamber of Commerce and member of the City of Racine mayoral advisory board.

Racine faces three elections, all of which have national interest. The current congressman is the Republican House speaker, Paul Ryan: he is stepping down and Democrats have an outside chance of taking his seat. In a year with a record number of female candidates two women, Tammy Baldwin and Leah Vukmir, are running for the Senate. Baldwin, the sitting Democratic senator, appears to have a strong lead, but Republicans have not yet given up. And in the governor’s race the Republican Scott Walker, whose attacks on public sector workers over the past eight years made him a poster boy for conservatives and a hate-figure for progressives, is in an extremely tight race. Bernie Sanders is coming to campaign in nextdoor Kenosha next week; Donald Trump will be holding a rally a few hours away too.

But during the drive through the county and into the city there are very few yard signs; in the city there are not many posters. It may well be that people are momentarily captivated by the fate of the Milwaukee Brewers in the playoffs, but three weeks from election day the political intensity of the last two years is not immediately apparent.

Midterm elections are strange affairs. Votes to the lower house (the House of Representatives) and a third of the upper house (the Senate) can have a considerable impact on how much of a president’s agenda can be achieved. But they are far more low key than presidential contests. The turnout is always lower and interest slower to catch on. I recall asking people on the Las Vegas Strip their thoughts the weekend before the 2006 midterms and discovering most didn’t know they were even happening.

But the only way you could avoid them in Racine is if the only things you watched were streamed through the likes of Netflix or Amazon Prime. Regular TV is awash with ads. Most are negative. In the local race, James Bryce tells people not to vote for his Democratic brother Randy, which has prompted their mother to call for the ad to be taken down. At the governor level, Walker’s supporters are running ads criticizing his opponent for not revoking the license of a teacher caught watching porn on his school computer. One ad focuses in on a teenage girl’s chest and refers to oral sex while featuring school students.

In a recent campaign call, local Republican activists were told the races were extremely close and there was everything to play for. Democrats have been told the same thing. But burned by Donald Trump’s election in the state – Wisconsin had not voted Republican since 1984 and nobody I have spoken to saw it coming even as they were campaigning on the day – and their failed attempts to get rid of Walker, Democrats dare not hope too much. Anecdotally, they sense people are more engaged than they can remember since Obama’s election. Emotionally, thanks to recurring disappointments, they have ceased to fully trust their senses.

“I’ve been doing this every cycle since 2006,” says Gallaher, a Democrat. “The closer you get to election day it starts to tighten and it gets closer and closer, and when it comes down to it Republicans will turn out and Democrats won’t. My hope is that all the things that have happened over the last two years will make a difference and bring people out. But having been active as long as I have in Wisconsin, I can’t afford the luxury of hope any longer.”