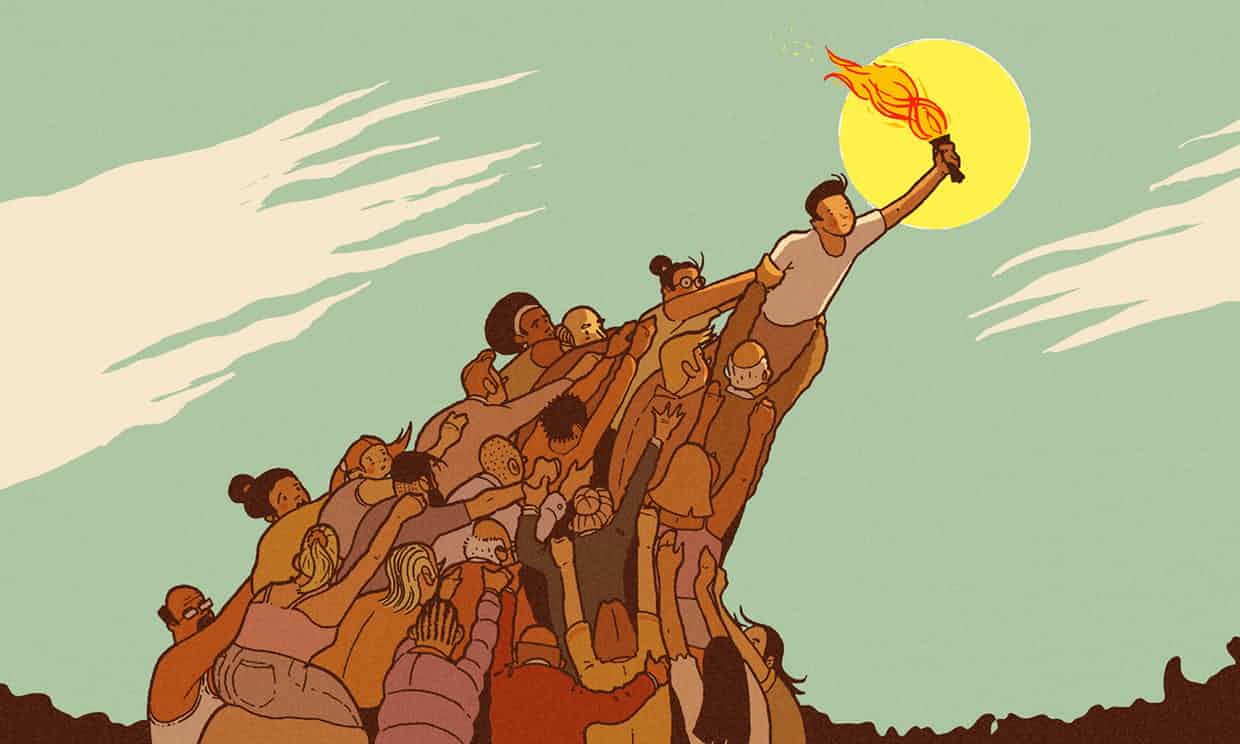 Despite all the smears and distortions, this was a victory for hope
The Guardian,
Illustration by R Fresson

Hope, when given the encouragement and the space, can be a force more potent than despair. The leap of faith that it demands, in imagining a future that does not yet exist, leaves it prone to the disparagement of cynics. To act on that faith, to take that leap, necessitates risk. And inherent in all risk is the possibility of failure.

For far too long, cynicism has been the dominant force in British electoral politics, willing failure at every turn. When they saw large, engaged crowds, the political class and its stenographers in the media dismissed them. They did not appeal to people’s better nature because they assumed people did not have one.

Mistaking morality for naivety, they presumed that people were motivated solely by self-interest – in the narrowest and most venal sense – and could not be moved by principle. When you talked to them of passion, they responded with polls. When you argued for what should happen, they explained why it could not be. Insisting that politics is the art of the possible, they refused to entertain that we could create new possibilities.

On Thursday night, despite the bombing, the smears and the distortions, hope won. The fact that British politics is undergoing a fundamental realignment in which many of the old rules no longer apply should, for now at least, be settled. The electoral coalition that made Thursday night possible must be tended to and engaged if the project is not to atrophy. Having drawn new people to the polls, it must engage them in politics.

That would mean jettisoning what melancholic nostalgia remains for Blairism, and finding a way to reconnect with the movement that made this moment possible. This has been a long time coming.

“We are all capable of believing things which we know to be untrue,” wrote George Orwell. “And then, when we are finally proved wrong, impudently twisting the facts so as to show that we were right. Intellectually, it is possible to carry on this process for an indefinite time: the only check on it is that sooner or later a false belief bumps up against solid reality, usually on a battlefield.”

On Thursday night those false beliefs bumped against the solid reality of an election. Rarely has conventional wisdom been proved to be so unwise. Theresa May requested a mandate for a bad idea – a stronger negotiating position for a hard Brexit – and we were told she would win a landslide that would leave her unassailable.

She showed her hand, and the British public called her bluff. She now goes to Europe weaker, her political capital spent and her reputation diminished. The Tories are the largest party because they did not merely court the UK Independence party vote but effectively became Ukip – flag-waving small islanders writing rhetorical cheques their policies could never cash.

So much ink has been spilled on Labour’s woes that the parlous state of the Tories had, until this point, gone relatively unnoticed. David Cameron promised the EU referendum in order to placate the right wing of his party and hoover up Ukip support. He narrowly won the election, only to lose the referendum and his job.

May called this election in order to give herself the cushion she needed to clear up the mess her predecessor had made. She now has less of a cushion and more mess than ever. Subordinating the national interest to that of their own party, the wounds they caused were not merely self-inflicted: they have seriously damaged the country.

Jeremy Corbyn, meanwhile, sought a mandate for a good idea – the redistribution of wealth and power in the interests of a fairer society and a more balanced economy. We were told he would lead his party to calamitous defeat; he upped the vote share by 10%, and the seat count by 29, and his position as leader seems, for now at least, secured.

The huge youth turnout saved many of the jobs of those Labour MPs who have spent the past two years trying to deprive Corbyn of his job. Whatever insurrectionary impulses remained on Labour’s backbenches must, surely now, be tamed. Not because Corbyn is infallible – he has proved a far better campaigner than he has a leader – but because, more than ever, they have proven to be both counterproductive and woefully ineffective.

Labour’s turn away from neoliberal orthodoxies that have shaped it for the last two decades and towards a more redistributive social democratic agenda has been electorally vindicated.

There is a response to the pathologies of xenophobia, racism and rabid nationalism that does not pander to bigotry

It is primarily here that the hope resides: the reimagining of what politics might be, and whose interests it might serve. “I feel the world as stranger to me than I ever felt before,” said the renowned academic Stuart Hall, in 2007. “It’s when everyone is operating in so many of the same parameters that the only debate you can have is a sort of Swiftian debate – you know, shall we eat the children now or later on?” Those parameters have now been broadened.

One of the most important lessons, and one that goes beyond our borders, from this result is that there is a response to the multiple pathologies of xenophobia, racism and rabid nationalism, bequeathed by globalisation, that does not demand pandering to bigotry.

Beyond the young, Labour’s success was due, in no small part, to its ability to appeal to a sizable section of the Ukip vote that felt the party had abandoned it. It was not, it turned out, necessary to compete in the gutter for the xenophobic vote when they could appeal to the white working class with a programme of increased public investment that would lead to better schools and hospitals.

But more than Thursday night being a victory for any one party or leader, it was a defeat for hubris. It was a defeat for a Conservative party so assured of victory that it produced an uncosted manifesto, key sections of which it had to disown, and promoted a leader with such contempt for the public that she refused to debate with her rivals.

It was also a defeat for the parliamentary Labour party, which has shown contempt for its membership in determinedly undermining its elected leader.

Finally, this was a defeat for a punditocracy that has wilfully and consistently chosen not to try to understand this political moment but to lampoon it for its refusal to conform to the pundits’ narrow understanding of what it is and what it might be.

Ironically, it is thanks, in no small part, to their low expectations that Corbyn has emerged the victor even though his party has ended up 57 seats shy of the Tories. While it has cleared the ideological space for a debate about a range of progressive demands, it has fallen short of creating the political space to deliver on them.

Those who made the leap did not do so for the pure joy of it. The sense of euphoria among elements of its base on Friday morning was almost indistinguishable from relief. They had expected worse. A disaster has been averted, but victory has not been achieved.

Labour did not win. But hope did.

follow on twitter
RT @MCRSociology: Gary Younge discusses identity politics and America with Will Hutton in this episode of @thewesocietypod https://t.co/72…
RT @mart_welton: Congratulations to all those getting their A-level results today. If you have BBB at A-level or above you can still apply…
RT @BernardineEvari: Please follow the groundbreaking online #MuseumofColour UK, founded by the unstoppable Samenua Sesher. The 1st gallery…
RT @EthnicityUK: Gary Younge is interviewed by @sonikkalogan about his work on racism and gun violence in @the_hindu #DataPoint podcast. h…
RT @thefreedomi: 🚨 NEW: Saudi women’s rights activist & academic Salma al-Shehab was sentenced to 34 years in prison + 34 year travel ban f…
RT @LRB: #DawnFosterForever! On Thursday 15 September at the @LRBbookshop, @BizK1, @piercepenniless, Lynsey Hanley and @garyyounge will d…
RT @ShowunmiV: This is how we support Black women and girls https://t.co/8YmgV21zHo
RT @sonikkalogan: It's #DataPoint Pod Thursday! In this week's episode, I talk to @noraneus, @garyyounge and @Casey_J_Wooten about the U.S.…
RT @bgnoiseuk: Next month, @LRBbookshop will host an event to celebrate the life and work of Dawn Foster with @BizK1, @piercepenniless, Lyn…
Help me Twitter. The quote: ""You can cut all the flowers but you cannot keep Spring from coming." is most commonly… https://t.co/Xs7JkiOEd5
© Gary Younge. All Rights reserved, site built with tlc
How to get mirapex online How much does cardizem cost per pill Vytorin pill price Flonase nasal spray price walmart Imitrex and naproxen together Order namzaric online Buy astelin online no prescription Where to get biaxin pills Buy generic combivir online How to get a atacand prescription from your doctor