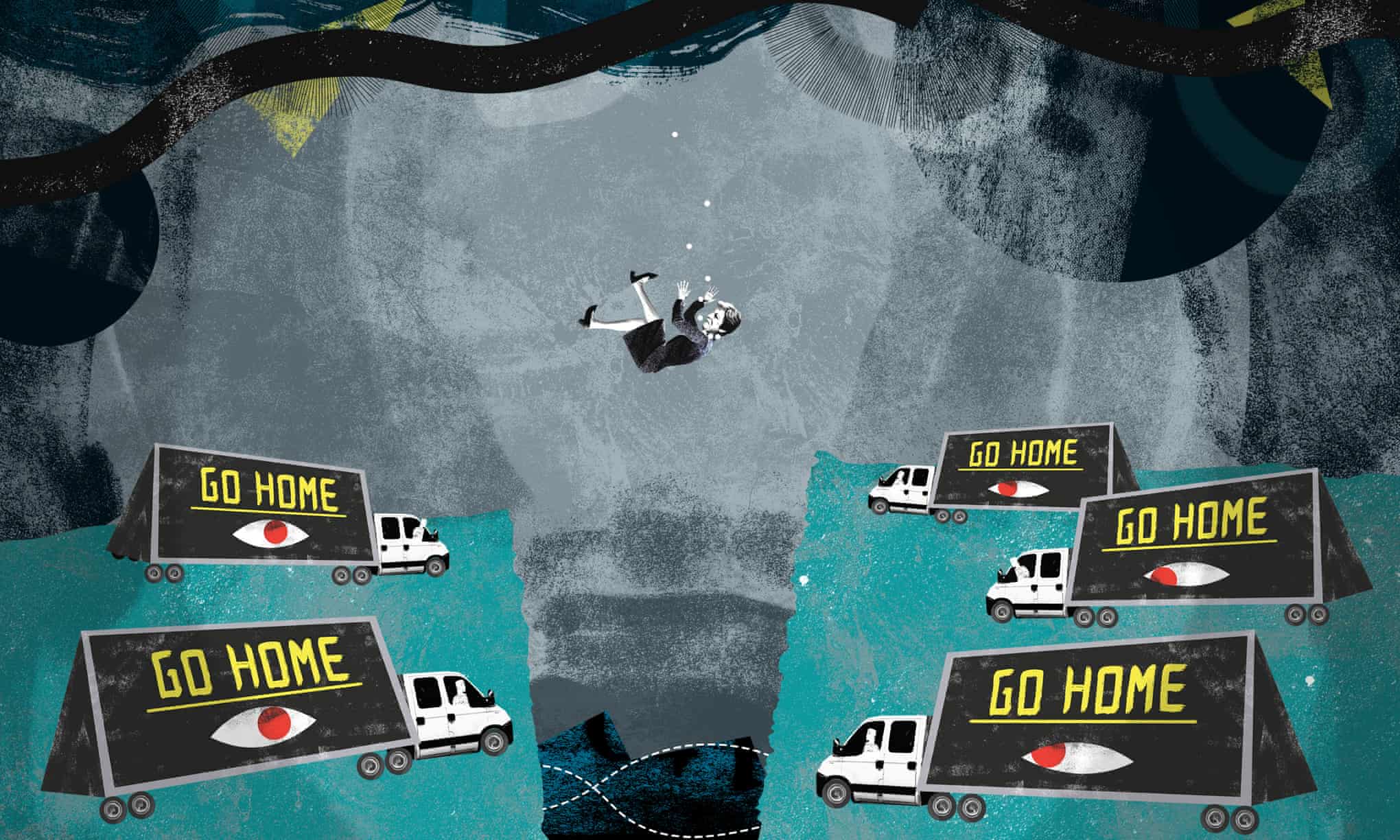 Don’t pity May. Her immigration obsession helped get us into this mess
The Guardian,
Illustration: Nate Kitch for the Guardian

At the beginning of this week it was difficult to imagine that Theresa May could be any weaker, her party behave any more recklessly or the country appear any more shambolic in the eyes of the rest of the world. It’s only Thursday and we’re already setting new lows.

In all of this, May strikes a tragic, hapless figure. Whenever she gambles – on a snap election, the meaningful vote – she loses. When she insists – there will be no snap election, there will be no delay in the meaningful vote – she reneges. I had to wait until the morning to write this because, although she insisted on Wednesday evening that she would carry on, there was no certainty that I wouldn’t wake up to discover that she had changed her mind overnight and bowed out.

True, May won a vote of no confidence. But who, in all seriousness, is confident that she is remotely in control? She spent the weekend insisting she would push ahead with a vote she knew she was going to lose. It wasn’t much of a strategy, but there was integrity in it. But in the absence of plan B she opted for A – delaying the vote, going to Europe in search of a unicorn, coming back empty-handed only to have her own party turn on her. Now she vows to carry on after more than a third of her party’s MPs expressed no confidence in her leadership. One is reminded of her press conference after the U-turn on the dementia tax during the last election. “Nothing has changed,” she insisted, draining her credibility with each denial.

Diminished, but not defeated, she is an object of pathos undeserving of our pity. This is Ms Windrush we’re talking about – the architect of the hostile environment who sent “Go Home” vans into diverse areas to intimidate undocumented migrants. This is the prime minister who told Albert Thompson, who had lived in Britain legally for 44 years and was denied cancer treatment on the NHS because, like many in the Windrush generation, he couldn’t prove it, that he needed to “evidence his settled status”. She is not a victim of events but a participant and protagonist in them. She may have voted remain, but as home secretary she contributed to the climate of anti-immigrant fervour that helped make the leave victory possible.

The fact that she has survived is really the most generous thing one can say about her at this stage. If survival were a superpower she would be an inaction hero. She’s still there. Since 8 June last year, the day she went to the country in search of a mandate and came back without a majority, we’ve been waiting for the other shoe to drop. Her political obituary was written then and has been stuck in a drawer ever since. Her days were numbered, even if no one knew precisely what that number would be. Whether she was dancing, coughing, powering on or flip-flopping, she has always been on borrowed time. But time is running out and those debts have come due.

The snap election was called in the hope, verging on certainty, that she would be returned with an increased majority that would get her through a week like this one. It achieved the opposite. The reason the Tory party didn’t replace her then is because they couldn’t think of anyone who could do a better job. That’s still true. The motley array of carnival barkers, opportunists, self-aggrandisers, dullards and fantasists poised to step in on Thursday should she have stepped down revealed a shallow and eccentric bunch.

And whoever might have replaced her would still have to engage with the fact that the Brexit sold during the referendum, for which there was barely a majority, does not exist. An image was conjured of Britain striding out of the EU in top hat and tails, like Jacob Rees-Mogg leaving the 21st century for an Old Etonian convention, towards a glorious past. Instead the two most likely scenarios at this point are that we fall out backwards, with our trousers round our ankles, and land on our behinds with no deal; or crawl back in with our tail between our legs and ask for a second chance.

The story of the last two years, like the last few days, has been reality intruding on rhetoric in the most inconvenient ways. The actual process of Brexit demands more pain or more compromise, or both, than most of those who voted to leave the EU are prepared to put up with.

“There are two kinds of European nations,” the Danish finance minister Kristian Jensen said last year. “There are small nations and there are countries that have not yet realised they are small nations.” This is Britain’s most public and painful reckoning with its size and influence in its post-colonial state. It’s not pretty. This is why we can’t have nice things.

Absent a change of government, the only thing we can be certain of is failure. Either Brexit will fail and we will stay in the EU or it will succeed in some way we either do not want or had not anticipated, and the country will fail. The politics, at this point, appears to be centred upon who will be blamed for that failure. Few in the polity seem to be talking about what success would look like beyond the narrow litigation of the close result two years ago. The leave victory was not only, in part, the product of alienation; the way in which the political class has dealt with it has produced even more cynicism.

So if May’s superpower is survival, her signature achievement has been to produce a deal that satisfies few, which she cannot get through parliament and which she cannot improve on. Given the demands of her party and her interpretation of the referendum, she could do no better. She was the best leader they had and she came back with the best deal a Tory leader could get. That’s the problem. For the Tories it doesn’t get any better than this. And nobody, including them, thinks it’s good enough.

They no more have a plan for their party than they do for the country or they did for Brexit. Having won a parliamentary majority just once since 1992 – and held it for all of two years – they precipitated this entire fiasco in a self-indulgent bid for unity that backfired. What started as an internal wound is now infecting the country as a whole.

The Tories have now proved themselves strategically incompetent at home and abroad. Having assembled a circular firing squad they decided to first shoot themselves in the foot. They have weakened their leader in parliament but not replaced her. They have weakened her hand in negotiations but have nothing to offer instead. The vote still stands no chance of being passed. It’s difficult to imagine how it could be worse than this. But then I thought that on Monday, and the week is not quite done yet.