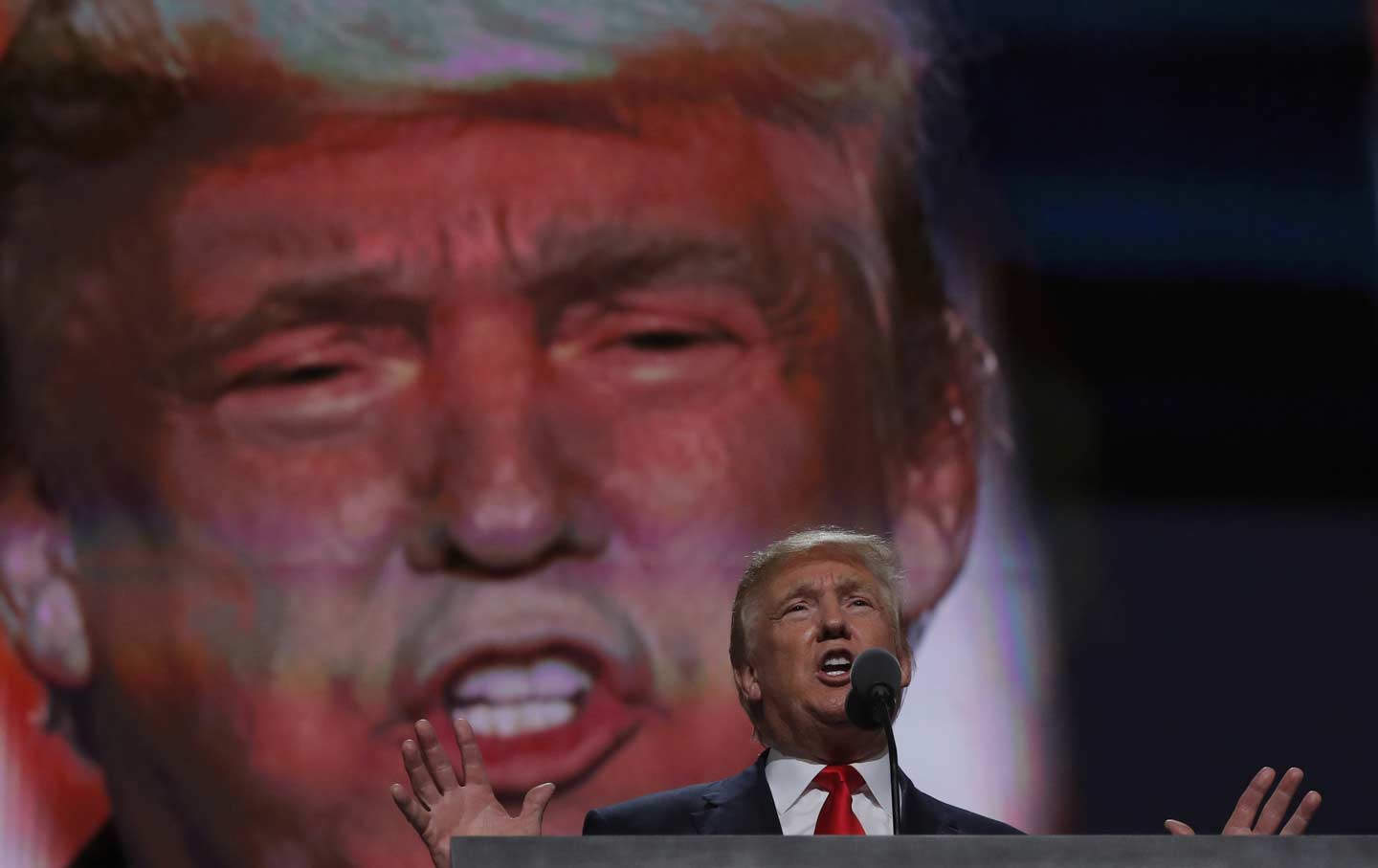 Donald Trump Is Not Too Big to Fail
The Nation,
(Reuters / Brian Snyder)

Shortly before the end of the year, the president-elect was asked for his response to a fellow Republican’s insistence that sanctions should be applied against Russia because of its alleged participation in hacking during the election. He said:

It’s going to be a long few years, so we had best pace ourselves. Donald Trump is a buffoon. He is a racist. He is a misogynist. He is a thin-skinned thug and a charlatan. He is a vulgar bigot and xenophobe. He is a liar and a plutocrat. All of those things are true; none of them are the point. Concentrating on them can build a white-hot furnace of self-righteous rage that will most likely lead to self-immolation. It will create great sketches and memes and nurture a sense of despair and grievance that can marinate in self-indulgence. There will be plenty of material for those on the liberal left who wish to be angry. But those who wish to channel that anger into an effective resistance face a stiffer challenge.

There are plenty of pathological people with Trump’s qualities roaming the planet making themselves and those around them miserable. Trump did not invent racism, stupidity, Islamophobia, or nationalism. He is not the first to enter the White House with discriminatory intent. The presidency is not a meritocracy—there have been far too many stupid white men in that office for anyone to seriously believe it is occupied by those best equipped to run a country.

Nor will Trump have to construct an authoritarian regime that lays waste to human rights from scratch; he has an edifice intact, built by predecessors of both parties. Reality is bad enough; we do not need to amplify its horrors with myths. We have not seen his like before at this level—but he didn’t come from nowhere.

Trump is dangerous. His campaign emboldened bigots of all kinds. It resonated not just nationally but globally, where the far right, from France to Finland, has emerged as the principal electoral beneficiary of the financial crisis. His campaign dispensed with electoral norms in favor of violence and race-baiting. As such, he not only represented a threat to democracy, but in a far more enduring sense, his candidacy was also the product of a democracy already in crisis. The reason why Trump matters isn’t because he’s an awful person. The problem with Trump is not that he’s stupid. It’s that he won—that he took those qualities to the nation, flaunted them openly and brazenly, and emerged the victor.

follow on twitter
We’ll that’s awkward https://t.co/X7NN3QwZwl
RT @penvlaanderen: Vanaf 29 mei is Brussel drie dagen lang het toneel van het Asmara-Addis Literary Festival - In Exile. Op maandag 30 mei…
RT @sulaimanaddonia: A panel dedicated to writers & journalists around the world, and esp in Eritrea, who are being persecuted for their cr…
RT @PaulLewis: Thrilled to announce that the Guardian’s investigation team is expanding. We’re recruiting several new journalists, includin…
RT @sulaimanaddonia: So thrilled to announce our panels for DAY 1 of the AALFIE. On “radical interpretation of Europe through travel, mig…
Watch this space. @Lanre_Bakare is a real talent. https://t.co/nwbYqf7y7L
RT @guardianlive: Award-winning artist and filmmaker #SteveMcQueen, Tate Director @mbalshaw and sociologist Paul Gilroy will be in conversa…
RT @nyeusi_waasi: For 20 days, 8 African miners have been stranded more than 500 meters deep in a zinc mine operated by a Canadian company…
From 2019 https://t.co/R5sOe2P9jI
RT @sulaimanaddonia: Reminder: We have 80 FREE tickets for refugees/working class/Students/artists on low-income to attend our festival tha…
© Gary Younge. All Rights reserved, site built with tlc
Generic zithromax prices Buy generic combivir online What do i need to buy cellcept Pravachol street price Can you take tylenol and imitrex together Online doctor paxil cr Zithromax online uk Get imitrex Can you take bactrim and levaquin together Buy verapamil online without a prescription