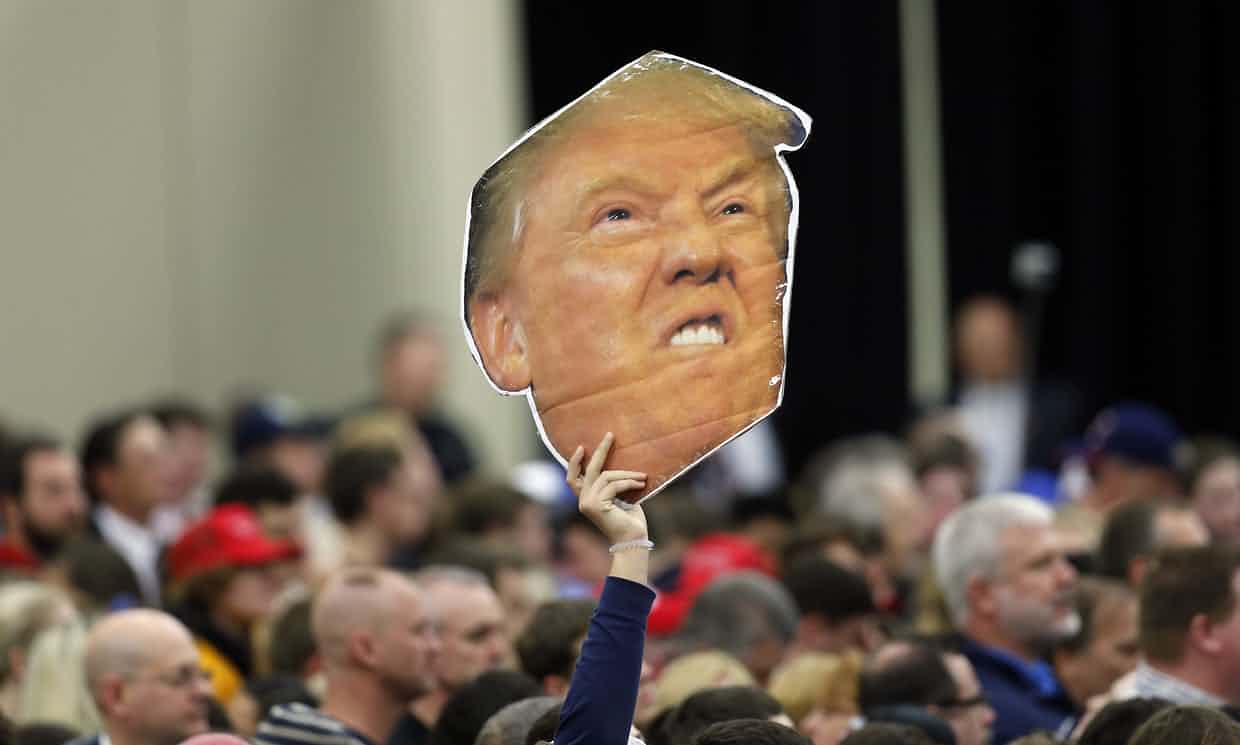 Donald Trump's ascendancy is due to leadership failure
The Guardian,
Photograph: Rex/Shutterstock

As Republican crowds became increasingly rowdy during the 2008 presidential campaign, voter Gayle Quinnell made a memorable, if truncated, contribution. “I can’t trust Obama,” she told Republican presidential hopeful, John McCain. “I’ve read about him and ... he’s an Arab.”

McCain began shaking his head vigorously and said “no, ma’am” several times before relieving her of the microphone. “No ma’am. He’s a decent family man, [a] citizen that I just happen to have disagreements with on fundamental issues.”

With Donald Trump’s victories on Super Tuesday, the Republican establishment has effectively ceded the microphone back to the mob and cannot figure a way to get it back. For years now they have leveraged the support of people like Trump to swell their coffers, staff their campaigns and enthuse their grassroots. They were an essential part of the chorus but they didn’t run the show.

The assumption was that Trump would eventually implode under the weight of his outsized personality and overt prejudice, and let the grownups get on with the business of running for office. So when he insulted Mexicans, women, Muslims, the disabled, the Chinese and so many, many more, his party did not challenge him. Like an indulgent parent with a poorly behaved child they raised an eyebrow when they should have set some boundaries. Now they are dealing with the consequences.

Of the 15 states that have been contested so far, Trump has won 11. He has netted 50% of the delegates; his nearest rival has just half that. He’s not unstoppable, the battle could go all the way to the convention floor. But the likelihood that he will be stopped is growing increasingly remote. His opposition remains splintered between Ted Cruz – who is loathed even more than Trump – Marco Rubio – the establishment favourite who has failed to make a breakthrough – and John Kasich, a rare moderate doing well enough to stay in but not well enough to win. Every poll in every state yet to be contested has Trump ahead.

Republican donors and brokers, who refused to challenge him when he was at his most bellicose and bigoted, now fear what his nomination will do to the party.

Republican senators and congressmen in tight seats fear they will be tarnished with his brush – others fear it will alienate the party from minorities for a generation. They are panicked, in short, not because his views are obnoxious (they always knew that) but because if he becomes the nominee they will have to explain whether they share basic values as well as a party label or why their condemnation of him – if indeed one was ever made – came so late and half-heartedly.

This is what a failure of leadership looks like. And it’s not new.

If Trump’s nomination looks increasingly likely, his election to the White House appears less so. A word of humility here. Since nobody, including probably Trump himself, assumed he would get this far, all predictions come with a clear health warning. This is a volatile situation with an apparently fickle electorate.

Nonetheless polls indicate that Hillary Clinton and Bernie Sanders would both beat Trump. Sanders, who calls himself a “democratic socialist” would fare far better. But Clinton, who won seven out of 11 states on Tuesday, remains the favourite to win the Democratic nomination. It’s not difficult to see why Trump would struggle against her – or anybody else. He has alienated large numbers of people, is erratic and boorish, and has very high unfavourability ratings even among his own side.

She has experience, projects competence and would be a ground-breaking president. Given the growing number of Republican grandees distancing themselves from Trump – at the weekend he refused to condemn the Ku Klux Klan without learning more about them – Clinton could find herself the unlikely head of a campaign for national unity.

But it’s also easy to see her vulnerabilities against a Trump candidacy. He’s self-financed, she takes money from the big banks. He rails against politicians – she’s the consummate politician, having been in the public eye since 1992. He’s changed his position on many things and so has she – from sentencing to gay marriage. On the stump he can be entertaining, she can be wooden. She has run this whole campaign while her emails have been investigated. Large numbers of voters find her untrustworthy, few can relate to her. Nobody thought she’d struggle against Sanders either.

There are eight months to go until election day and anything can happen. This is one of the few things we can say with some certainty because up until this point almost anything has happened.