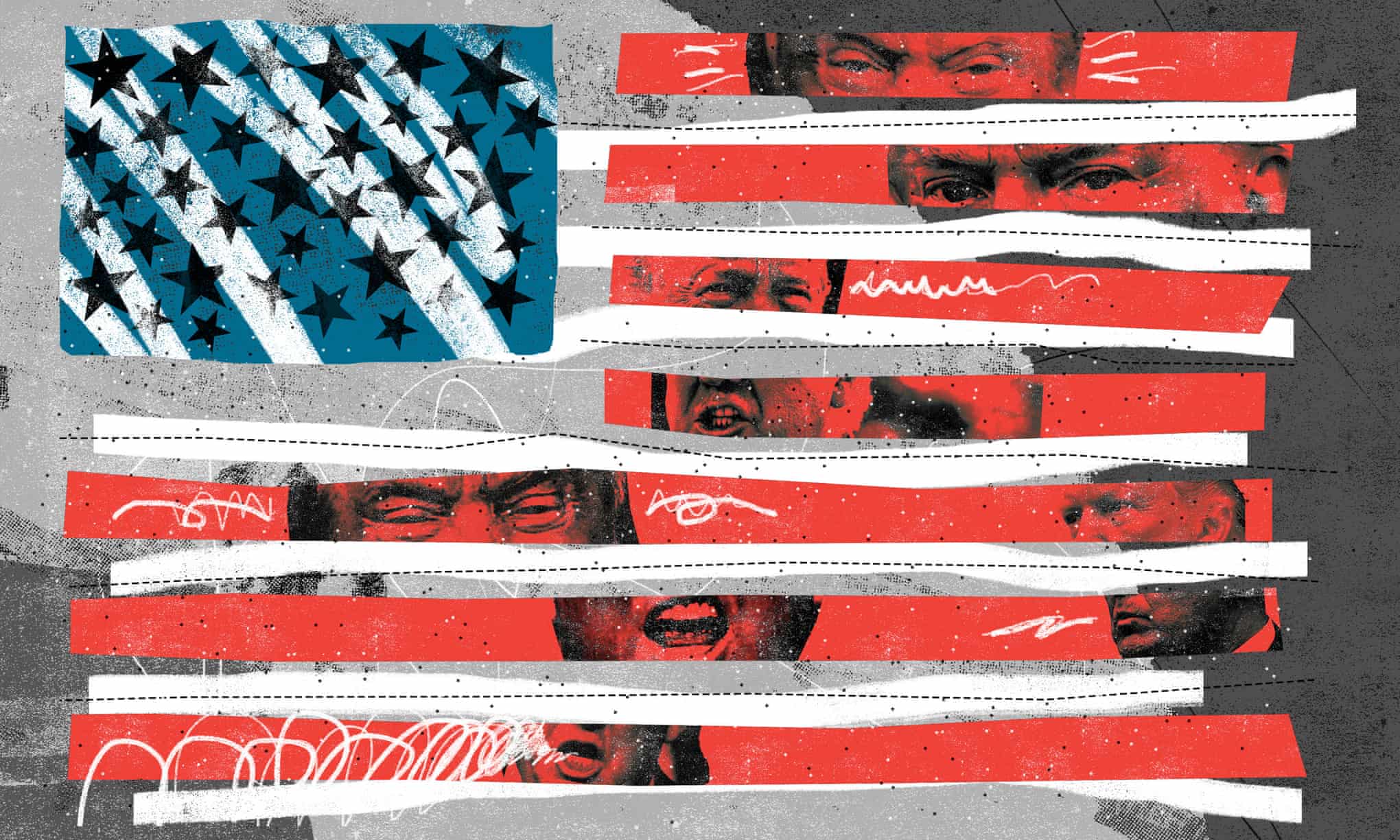 Donald Trump’s sanity is not the question. The real issue is how he got into office
The Guardian,
Illustration: Nate Kitch

While writing a New Yorker profile on Donald Trump in the late 1990s, Mark Singer attempted to discover something about the businessman’s private thoughts, as opposed to his outsized, public persona. When Singer asked him what he thought about when shaving in front of the mirror, Trump did not really understand the question.

“OK, I guess I’m asking, ‘do you consider yourself ideal company?’” Singer said. “You really want to know what I consider ideal company?” replied Trump. “A total piece of ass.”

Divining, assessing and adjudicating the mental health of this US president has become more than just a parlour game

Divining, assessing and adjudicating the mental health of this US president has become more than just a parlour game. Following a 2017 conference, 27 psychiatrists, psychologists and other mental health experts wrote a book, The Dangerous Case of Donald Trump, arguing it was their moral and civic “duty to warn” America that “for psychological reasons”, Trump was “more dangerous than any president in history”. They diagnosed him with everything from “severe character pathology” to “delusional disorder”, which can be added to the more common verdicts of “narcissistic personality disorder” and “antisocial personality disorder” which are regularly offered.

His behaviour and comments over the past fortnight would appear to not only confirm these conclusions, but to suggest his condition is deteriorating. There has been the appalling treatment of Harry Dunn’s parents, and his reference to his own “great and unmatched wisdom”. He sent a letter to the Turkish president, Recep Erdoğan, warning him: “Don’t be a tough guy. Don’t be a fool. I will call you later.” On Wednesday, in a single press conference with the Italian president, Sergio Mattarella, he attacked Google, Amazon, Germany, France, Spain, his guest and the European Union, as well as several US intelligence and law enforcement officials.

Later that day, Democratic leaders walked out of a White House meeting with him after he continually insulted them. But not before he told House speaker Nancy Pelosi: “I hate Isis more than you do,” and claimed “I captured Isis … in one month.”

As the threat of impeachment leaves him more isolated, and an election he may lose makes him more vulnerable, we can expect more bizarre behaviour and, consequently, more attempts to frame his actions as those of an unstable and unhinged despot. Such depictions are tempting. They should also be resisted.

Trump’s state of mind is, of course, relevant. He is the commander-in-chief of the most powerful military forces in the world. He has the nuclear codes. He is impulsive and capricious. He lies constantly, unashamedly and apparently compulsively. It is deeply worrying that the executive powers of the presidency lie in the hands of a man who is at one and the same time so brittle, aggressive, vindictive, ridiculous and self-obsessed. His decision to abandon a longstanding ally in Kurdistan and pull US troops out of Syria, against all military advice, is a case in point.

But to reduce his presidency to this – one man and his frail mind – is to ignore how he got there, all he has said and done since he has been there, and how he remains there. (It also risks reducing mental health to a lazy slur.) Just because he believes he will go down in history as a great man doesn’t mean we have to subscribe to the “great man theory of history” – the theory which claims events are moulded not by ordinary people, social movements and economic processes, but by key individuals who stamp their will on the world through force of personality.

For along with Trump’s personal frailties is a series of political characteristics that underpins his anomie. He is a misogynist, a racist, a xenophobe and a nationalist. Those are not psychological descriptors but political ones, fortified by systems and ideology.

As such, his behaviour has been irascible but hardly erratic. The rhetorical objects of his disdain are not random. He has not lashed out at the National Rifle Association, the religious right or white people. Politically, his tantrums invariably find their mark in the weak, the poor, the dark, the female, the Muslim, the marginalised and the foreigner. (He will attack powerful people, but not simply for existing. They must cross him first.)

These inclinations were clear when he stood for the presidency. He has been every bit as bigoted, undisciplined, indiscrete, thin-skinned and braggadocious as his campaign promised. And he won.

This was not because people didn’t see those things, but because they either didn’t care, cared about other things more, preferred him to the alternative, or simply didn’t show up. As such, his victory marked a high point for the naked appeal of white supremacy in particular and rightwing populism in general, and a low point for the centre-left, neoliberal agenda.

True, he did not win the popular vote, but nonetheless close to 63 million people voted for him. True, his party lost the House of Representatives in the 2018 mid-term elections. But they also gained two seats in the Senate – the first time the party holding the presidency has achieved that since 2002 – in the wake of a synagogue shooting and mail-bomb attacks inspired by his rhetoric. True, more than half of the country wants to impeach him; but about 40% still approve of the job he’s doing. The one thing that stands between him and impeachment is the party behind him in both houses.

Even his thuggish “America first” foreign policy stands as part of a tradition. In 1964, when the Greek ambassador tried to point out the shortcomings of the US plan to partition Cyprus, President Lyndon Johnson replied: “Fuck your parliament and your constitution … We pay a lot of good American dollars to the Greeks, Mr Ambassador. If your prime minister gives me talk about democracy, parliament and constitution he, his parliament and his constitution may not last long.” He would never have put that in a letter. But three years later, Greece was under a brutal military junta backed by the US from which it did not emerge for seven years.

In other words, this particular form of insanity – if that is what it is – enjoys mass, if not majority, support, institutional defence and historical precedent. It is the mindset of more than just an individual. Trump’s presence serves a purpose and interests. If he is a lone wolf, how do we explain the likes of Boris Johnson or Silvio Berlusconi, who share so many of his “idiosyncratic traits”, from accusations of sexual harassment to a cavalier attitude towards democratic norms and casual racism.

“The great man of the age,” wrote Friedrich Hegel – using “great” to mean powerful rather than wonderful – “is the one who can put into words the will of his age, tell his age what its will is, and accomplish it. What he does is the heart and essence of his age; he actualises his age.”

As such, in his desire to blame everyone but himself, in his lies, bullying, despotism, insecurity, ineptitude, cheating, scapegoating, preening self-regard, vanity and ignorance, Trump is an emblem of the free-market, white supremacist nationalism that is ascendant in this moment.

Ultimately there may be a medical or therapeutic intervention that can help him; but only a political intervention can help us get rid of him.