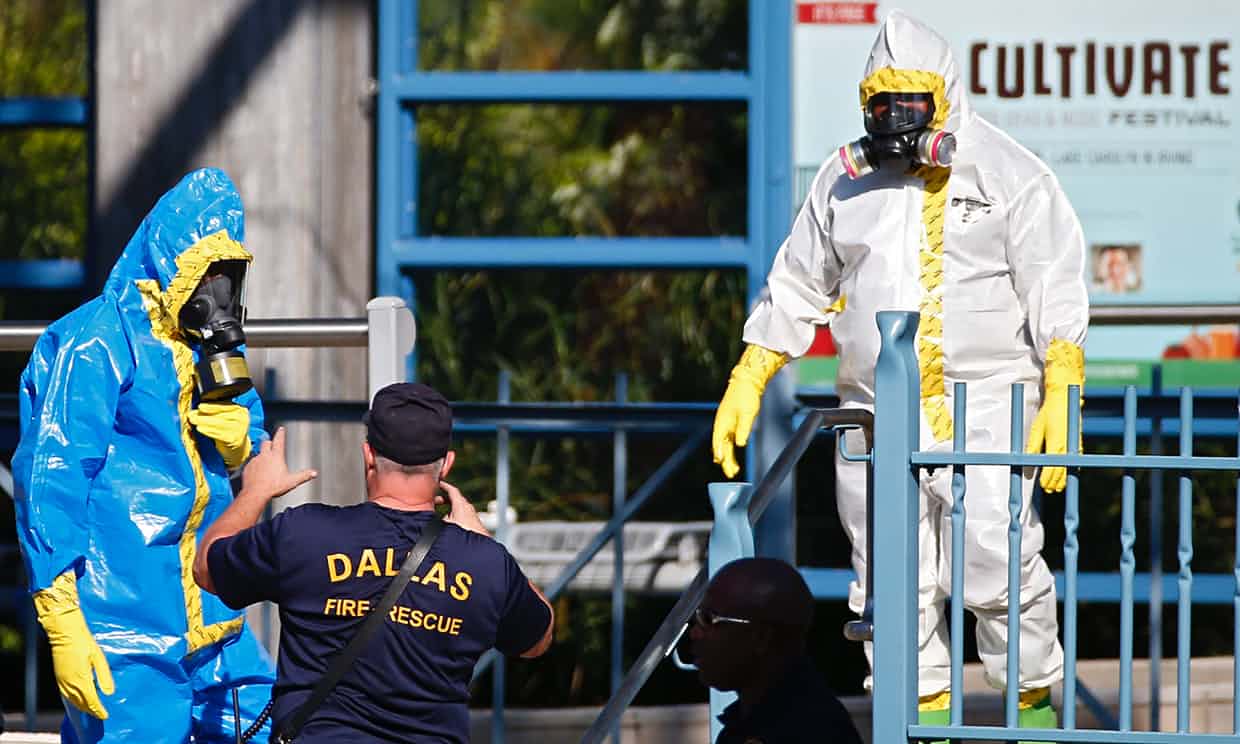 In a column ostensibly explaining why moderates struggle in the Republican party, Washington Post columnist Richard Cohen last year wrote: “People with conventional views must repress a gag reflex when considering the mayor-elect of New York – a white man married to a black woman and with two biracial children. (Should I mention that Bill de Blasio’s wife, Chirlane McCray, used to be a lesbian?) This family represents the cultural changes that have enveloped parts – but not all – of America.”

If the thought of New York’s first family’s interracial marriage makes many Republicans (and apparently Cohen) gag, imagine how many sick bags they are filling over Ebola. The arrival of the virus in America has crystallised a range of Conservative anxieties: immigration, race, terrorism, science, big government, Barack Obama – you name it. For the right, Ebola is not just a disease, it is a metaphor for some of the things they don’t understand and many of the things they loathe.

Conservative eminence grise Phyllis Schlafly believes Obama is allowing it into the country deliberately. “Obama doesn’t want America to believe that we’re exceptional,” she said. “He wants us to be just like everybody else, and if Africa is suffering from Ebola, we ought to join the group and be suffering from it, too.” Rightwing radio host Rush Limbaugh claims liberals won’t impose a travel ban from infected areas because Ebola is “payback” for slavery.

The roots of this fear-mongering are deep, and when Ebola finally landed it fell on fertile soil. First, it came from abroad – a place that many Conservatives are both afraid of and resent. Republicans are the most likely to be against immigration, for bombing Isis, to believe that America’s global power is declining, and to fear globalisation. They’ve wanted to build a huge wall on the Mexican border for years. Ebola breaking out on the other side of the globe has simply added to their siege mentality. “Ladies and gentlemen,” Republican senate candidate for North Carolina Thom Tillis said in a debate recently. “We have an Ebola outbreak, we have bad actors who can come across the border. We need to seal the border and secure it.” South Carolina congressman Joe Wilson last week warned that Hamas might deliberately bring Ebola sufferers into the US through Mexico illegally. You couldn’t make it up; you wouldn’t know where to start. There have been three confirmed cases of Ebola in the US and none in Mexico – if anyone should be sealing the border to protect themselves from the virus it should be the Mexicans keeping Americans out.

Second, it’s coming from Africa – a continent about which Conservatives apparently know little: while being briefed on foreign affairs during the 2008 campaign, vice-presidential candidate Sarah Palin asked her tutors whether “South Africa was part of the country” [of Africa]? Four years later, Rick Santorum, Mitt Romney’s main rival, argued that thanks to Aids and the threat of radical Islam “[Africa] was a country on the brink”. Limbaugh thinks Sierra Leone was founded by “British African American slaves” – whoever they are. One of the reasons the government can’t ban direct flights from the infected west African countries – Sierra Leone, Liberia and Guinea – is because there are no direct flights from those countries to America.

Third, Ebola makes the case for government: an institution Conservatives have no love for. It is an issue of public health to which no individual or privatised response can make any substantial, meaningful contribution. To fight an epidemic like Ebola you need a well-resourced public sector, well-trained government employees, central planning and coordination and a respect for science.

Sadly, we have not seen a lot of this either from the Centers for Disease Control or the Obama administration, whose response to the outbreak has been patchy and confused. The CDC has conceded as much (very basic mistakes by the hospital in Dallas didn’t help). Obama is said to be seething at his team’s efforts. Coming so soon after an intruder made it into the White House, and just a year after the botched healthcare rollout, his administration is getting a reputation for incompetence that only confirms the right’s conspiracy theories. Fighting Ebola doesn’t just need government; it needs competent governance.

Fourth, it makes the case for public healthcare. In 2012, 43% of Americans reported not getting the medical care they needed because of costs. The figure for the uninsured is far higher. Fearing high bills and long waits at emergency rooms, the uninsured generally wait to see if an ailment is really serious before seeking assistance. Imagine how likely they would be to seek immediate help for a temperature and, if they did turn out to have Ebola, how many people they might infect before they did. About a quarter of Texans, the state where the outbreak is centred, do not have medical insurance. (That includes Thomas Eric Duncan, the only person to die from Ebola in the US.) It would be less but Texas governor, Rick Perry, refused to cooperate with the federal government to expand Medicaid under the provisions of Obamacare.

Finally, Ebola serves as a proxy for the many long-held Conservative prejudices about Obama – that he is an African-born interloper come to destroy America. A 2010 poll showed that just under a third of Republicans believed Obama was a “racist who hates white people”. Michael Savage, another rightwing radio host, calls him “Obola”. “Obama wants equality and he wants fairness, and it’s only fair that America have a nice epidemic or two … to really feel what it’s like to be in the third world. You have to look at it from the point of view of a leftist.”

From the point of view of this leftist, what really terrifies the right about Ebola is that it shows – albeit in a deadly, scary, tragic way – that we are all connected. It shows that no matter how strong the gates around your community, how high the wall on your border, how sophisticated the alarm on your house; no matter how much you avoid state schools, public transport and public libraries; no matter how much you pay the premium to retreat from the public sphere – you cannot escape both your own humanity and the humanity of others, and the fact that our fates are tied. If you want to feel secure in Texas, regardless of your race, income or religion, it’s in your interests that people have healthcare in Monrovia.

follow on twitter
RT @MCRSociology: Gary Younge discusses identity politics and America with Will Hutton in this episode of @thewesocietypod https://t.co/72…
RT @mart_welton: Congratulations to all those getting their A-level results today. If you have BBB at A-level or above you can still apply…
RT @BernardineEvari: Please follow the groundbreaking online #MuseumofColour UK, founded by the unstoppable Samenua Sesher. The 1st gallery…
RT @EthnicityUK: Gary Younge is interviewed by @sonikkalogan about his work on racism and gun violence in @the_hindu #DataPoint podcast. h…
RT @thefreedomi: 🚨 NEW: Saudi women’s rights activist & academic Salma al-Shehab was sentenced to 34 years in prison + 34 year travel ban f…
RT @LRB: #DawnFosterForever! On Thursday 15 September at the @LRBbookshop, @BizK1, @piercepenniless, Lynsey Hanley and @garyyounge will d…
RT @ShowunmiV: This is how we support Black women and girls https://t.co/8YmgV21zHo
RT @sonikkalogan: It's #DataPoint Pod Thursday! In this week's episode, I talk to @noraneus, @garyyounge and @Casey_J_Wooten about the U.S.…
RT @bgnoiseuk: Next month, @LRBbookshop will host an event to celebrate the life and work of Dawn Foster with @BizK1, @piercepenniless, Lyn…
Help me Twitter. The quote: ""You can cut all the flowers but you cannot keep Spring from coming." is most commonly… https://t.co/Xs7JkiOEd5
© Gary Younge. All Rights reserved, site built with tlc
Tadalafil online us How to get voltaren over the counter Lipitor sales 2020 Antabuse buy Can you take celebrex and naproxen together How much does generic lumigan cost What do i need to buy lotrisone Vytorin pill price How to get a aricept prescription from your doctor Cheap generic lotensin