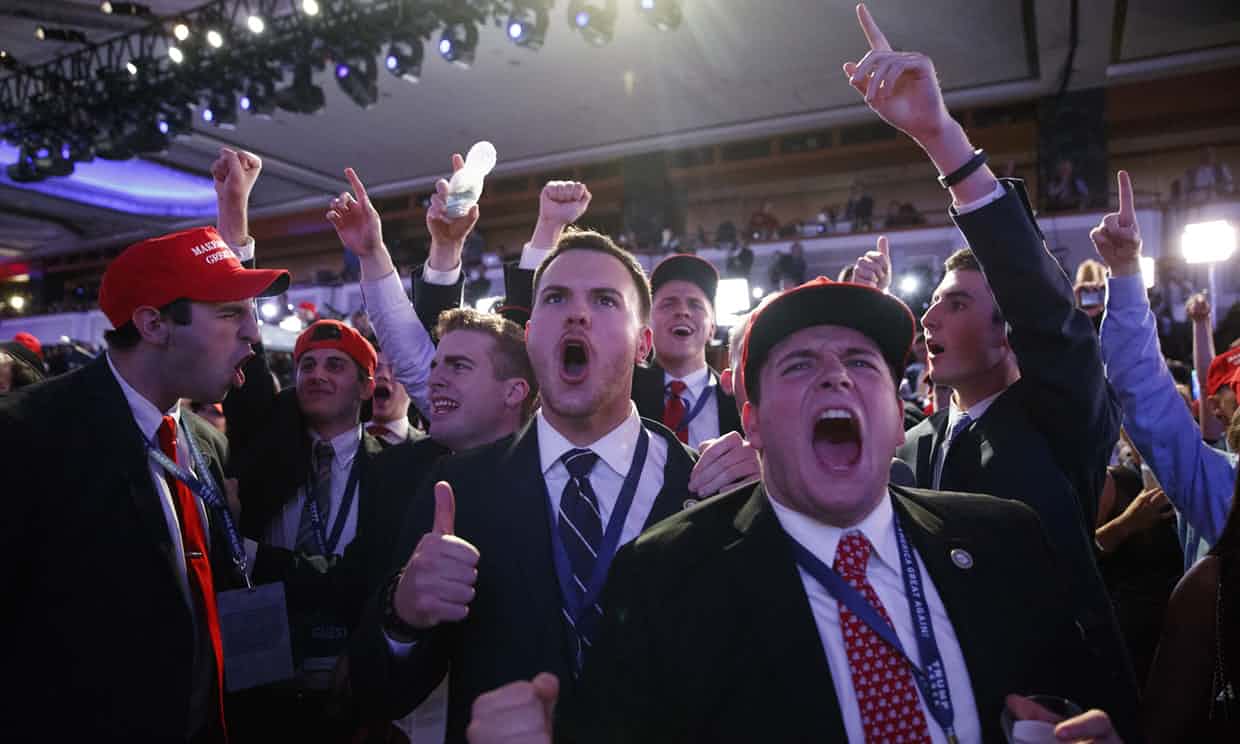 Electing Trump: the moment America laid waste to democracy as we know it
The Guardian,
Photograph: Evan Vucci/AP

Donald Trump’s election victory changes both the game and the stakes. He adopted a conciliatory tone, both towards the nation and his opponent, Hillary Clinton, in his victory speech.

But for the past year his campaign has laid waste to the democratic traditions of an ostensibly mature political culture. Advocating violence at his own rallies, branding journalists scum, making up facts, refusing to accept the result if he lost – he refused to abide by basic democratic norms.

A self-confessed sexual predator, race-baiter, xenophobe and Islamophobe – not to mention a thin-skinned Twitter troll who mocks disabled people – he also refused to recognise what had until now been the boundaries of acceptable electoral discourse.

Trading the dog whistle for a wolf whistle, a range of bigotries have now been emboldened. New lows have been set; old, if unspoken, rules have been broken. A new normal has been established literally overnight; divisive in its rhetoric, authoritarian in its impulses, untethered in its ideology, it wears its vulgarity and ignorance as a badge of honour. Trump both personifies and embodies it. He is no longer a threat to the powers that be; he is the power that will be.

Because for these infractions Trump has not only gone unpunished, he has been rewarded. And not with a new prime-time show but the White House, the nuclear codes and the most powerful military on the planet.

As German chancellor Angela Merkel’s guarded response to the result indicates, this is not just an issue for Americans but for the world. The electoral appeal of nationalist nostalgia, class resentments, racial animus and economic insecurity are by no means limited to America. Most western nations have their Trumps, and many of these Trumps are having their day. Nigel Farage, the Ukip leader, campaigned with him; Marine Le Pen, the leader of France’s Front National, was one of the first foreign politicians to congratulate him.

Watching the scales fall from liberal eyes on Tuesday night in Muncie, Indiana, where I have spent the past month, as unexpected results came in from rust belt states, felt like Brexit 2.0. Today they wake up to a different country, not because the country has changed but because they can now see it for what it is. Bars in the more liberal downtown were silent and stunned; out in rural areas they were setting off fireworks.

This was not inevitable. There is no doubt that Clinton, who has more experience that almost any candidate previously, was qualified to do the job. She may yet win the popular vote. The problem was she did not have the qualities to win an election. She maintained the Obama coalition of the young, women, minorities and the university educated but could not energise them in sufficient numbers where it mattered, even as many emerged to vote not for Trump but against her. Sexism played a part; but, given that Trump won white women by a considerable margin, there was more to it than that. The FBI certainly didn’t help, but that alone cannot explain this.

The historical symbolism of her candidacy notwithstanding, Clinton stood for the status quo. She in effect claimed she was running for Barack Obama’s third term. But in a country where wages are stagnant, class mobility has calcified, inequalities are growing and healthcare costs are rising, people did not want more of the same. Driving around Muncie and witnessing the remains of what was once a vibrant industrial town, with whole factories abandoned like carrion, it’s not difficult to see why Delaware County, which twice went for Obama, backed Trump. They wanted something, anything, to change.

“The Democratic party establishment just says it wants to do the things we’ve always done and have incremental change,” says Dave Ring, who owns the Downtown Farm Stand and voted for Bernie Sanders in the primary and Clinton in the presidential election. “And the rest of the public is out here like: we don’t have time for incremental change.”

This was not simply a class revolt. Clinton won big among the poor; Trump won more narrowly among the wealthy. The white working class were a significant section of the Trump coalition and swung in large numbers towards him; but they were not the dominant part of it. The defining fault lines were also race, age, gender and town v country.

But Trump couldn’t have won without that shift in the white working class, and racism alone cannot explain that. “Nobody speaks up for the poor,” says Jamie Walsh, who grew up in Muncie and voted for Obama in 2008 and planned to vote for Trump this year. “There is systemic racism, but black people have advocates. Poor white people don’t. The whole idea [of white privilege] pisses poor white people off because they’ve never experienced it on a level that they understand. You hear privilege and you think money and opportunity and they don’t have it. So when Trump says stuff, they can understand what he’s saying, and he speaks to them in a way other people don’t.”

For while Trump’s allegations of election fraud had little purchase, his claims that “the system is rigged” rang true for many. Almost 10 years since the financial crash, only the poor and middle class have paid the price; Clinton’s emails were a red herring, but there really is one law for the powerful and another for the poor; life expectancy among non-college-educated whites is falling. People, in short, have a great deal to be angry about, and precious little reason to trust the establishment.

So Trump’s victory was not simply a rebuke to the Democrats in general or Clinton in particular. The Republican hierarchy did not want him, either, and for a significant period of the campaign he ran against them, too. It was an indictment of the entire political class by a sizable section of white America either nostalgic for a mythical past that never existed or for racial privileges that did. He is a thumb in the eye to the bipartisan consensus, and its media cheerleaders, that brought them the Iraq war, the North American Free Trade Agreement and the financial crisis. He galvanised those so desperate for a political future that included them that they were prepared either to overlook the glaring contradictions in his conservative anti-establishment credentials – he’s a thrice-married, former gun-control, pro-choice Democrat who had the Clintons at his wedding – or saw them and forgave them.

He represents the incoherent, inchoate and ill-informed rage against the fallout of neoliberal globalisation that has found a home in a newly mobilised and racialised nationalism across the west. His victory will provide momentary solace to his supporters but no lasting remedy. Clinton will not be jailed; no wall will be built; he will not defeat Isis, but he will appoint supreme court justices, he can start wars. In short, he will not deliver on his most outlandish promises precisely because they are outlandish. He exemplifies the problem; he has no solutions.

The one thing we knew before anyone cast a vote was that Americans were going to get a president they didn’t like. Both candidates were viewed unfavourably; we just didn’t realise they would opt for the one they liked least. For a week or more Americans have been saying they just wished the whole election was over; now many would like to turn back the clock to a time, just yesterday, when they never imagined this was possible. After they spent the best part of a year treating Trump’s candidacy as a joke, he has the last laugh. America has taken a leap into the dark; we must now see where it lands.