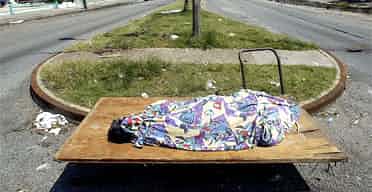 Empty, ruined and desperate
The Guardian

Police shot dead at least five people who apparently opened fire on contractors on a city bridge, in a clear demonstration of the resolve to deal with the lawlessness that has beset New Orleans.

In belated recognition of the depth of the crisis, Washington swallowed its pride and asked for blankets, food and water trucks from the EU and Nato, and beds and medical supplies from Canada.

As relief workers, national guardsmen and soldiers went door to door looking for bodies, the US health secretary, Michael Leavitt, confirmed the worst fears over the death toll, saying it was "evident it's in the thousands".

Federal officials said the next threat was of an epidemic caused by floodwater contaminated by dead bodies, sewage and toxic waste.

The first case of dysentery was reported yesterday, and a relief shelter was closed following fears of disease in Mississippi, where rescue workers were also looking for victims of Hurricane Katrina.

In New Orleans, the tumult and anguish of the past week were replaced by a haunting calm, as the last survivors were lifted out by helicopter.

The streets were deserted apart from the soldiers, and the cats and dogs rooting through rubbish. In districts where the national guard and police were not out in force, there was still a sense of nervousness. One spray-painted sign on a building warned: "Drunks with guns - you loot, we shoot."

Local officials warned that law enforcement officers and their armed deputies were "highly strung" and anyone thinking of entering to loot might not make it out alive. Warren Riley, the deputy police chief, said that officers shot eight people, killing five or six of them, after the gunmen fired on a group of contractors working for the Army Corps of Engineers.

The contractors were shot at on their way to repair the breached 17th Street canal dyke, a spokesman said.

By an official count, more than 42,000 people had been evacuated from the city over the weekend although an occasional dazed survivor emerged from a house yesterday for the first time since the hurricane hit struck on Monday. Zachary Edwards, who was waiting to be evacuated with his family, and planned to go to Chicago, said: "It was hell, that's the only way I can describe it. We ain't talked to nobody in six days."

Mr Edwards was one of the the tens of thousands of evacuees who have recognised that they may never be able to return to their homes or can no longer risk the possibility of another hurricane. The homeland security secretary, Michael Chertoff, said that stragglers would also have to be evacuated despite protests from some wanting to stay. "That is not a reasonable alternative," he said.

He told Fox News: "We are not going to be able to have people sitting in houses in New Orleans ... while we de-water and clean this city. When we remove the water from New Orleans, we're going to uncover people who died hiding in houses, who got caught by the flood, people whose remains will be found in the street. There'll be pollution. It is going to be about as ugly a scene as you can imagine."

The mass evacuation has imposed a severe burden on neighbouring states. Rick Perry, the governor of Texas, which has accepted more than 220,000 people - around 1% of its total population - called it the biggest influx of refugees in the history of the US.

Evacuees have also been moved, by train, bus and air, to Oklahoma, Tennessee, Florida, Georgia, Colorado, Arizona and South Carolina. Many refugees have vowed to start new lives in cities far away rather than wait for months for New Orleans to become habitable again.

After five days of hesitation, the national guard and troops were staging what amounted to an invasion of the abandoned city with 4,000 soldiers searching house-to-house for survivors and another 7,200 airborne combat troops and marines on the way.

Lieutenant General Russel Honore, the commander of relief operations and in effect the New Orleans military governor, yesterday briefed the defence secretary, Donald Rumsfeld, and the chairman of the joint chiefs of staff, General Richard Myers.

Mr Rumsfeld visited a field hospital but according to Reuters "walked right by a dozen refugees lying on stretchers just feet away from him, most of them extremely sick or handicapped".

As they pressed ahead with the relief effort, administration officials denied allegations that they had dithered for four days before intervening decisively, by which time many thousands of poor, mostly black New Orleans residents had suffered torment with some dying.

Aaron Broussard, the president of Jefferson parish, south of New Orleans, cried as he told the story of a colleague who had reassured his trapped mother every day that help was on the way and she would be rescued. On Friday night, with no help in sight, the elderly woman drowned.

"We have been abandoned by our own country," Mr Broussard told NBC's Meet the Press programme. "It's not just Katrina that caused all these deaths in New Orleans. Bureaucracy has committed murder here in the greater New Orleans area, and bureaucracy has to stand trial before Congress now."

As the political storm gained momentum, the White House reacted. Federal officials blamed the Louisiana state government of Kathleen Blanco, a Democrat, for waiting too long to call for outside help.

Condoleezza Rice, the secretary of state, toured her home state, Alabama. She had been criticised for watching the Broadway musical Spamalot as New Orleans flooded. On returning to Washington, she denied the delay in sending help had anything to do with most of the stranded survivors being black. "I don't believe for a minute anybody allowed people to suffer because they are African-Americans," she said.

follow on twitter
RT @BernardineEvari: Please follow the groundbreaking online #MuseumofColour UK, founded by the unstoppable Samenua Sesher. The 1st gallery…
RT @EthnicityUK: Gary Younge is interviewed by @sonikkalogan about his work on racism and gun violence in @the_hindu #DataPoint podcast. h…
RT @thefreedomi: 🚨 NEW: Saudi women’s rights activist & academic Salma al-Shehab was sentenced to 34 years in prison + 34 year travel ban f…
RT @LRB: #DawnFosterForever! On Thursday 15 September at the @LRBbookshop, @BizK1, @piercepenniless, Lynsey Hanley and @garyyounge will d…
RT @ShowunmiV: This is how we support Black women and girls https://t.co/8YmgV21zHo
RT @sonikkalogan: It's #DataPoint Pod Thursday! In this week's episode, I talk to @noraneus, @garyyounge and @Casey_J_Wooten about the U.S.…
RT @bgnoiseuk: Next month, @LRBbookshop will host an event to celebrate the life and work of Dawn Foster with @BizK1, @piercepenniless, Lyn…
Help me Twitter. The quote: ""You can cut all the flowers but you cannot keep Spring from coming." is most commonly… https://t.co/Xs7JkiOEd5
RT @the_hindu: #DataPoint | This Thursday, @sonikkalogan takes a look at the #US gun violence epidemic, as mass shootings continue to grow…
City workers get double-digit wage rises while lowest-paid see 1% increase - “Them’s the breaks” https://t.co/XeVyG72iA5
© Gary Younge. All Rights reserved, site built with tlc
Where can you buy cialis What i should buy with celebrex Cheap generic reglan How to get aggrenox without prescription Lipitor sales 2020 Where to buy cheap renagel How much does generic lumigan cost Actos best buy Actonel pill price Voltaren street price