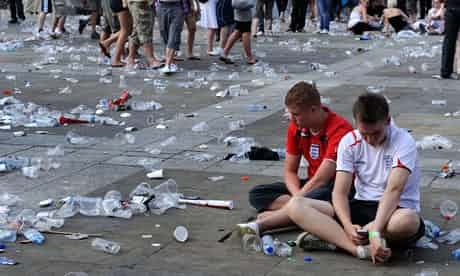 With its flags rolled up, face paint scrubbed and crusader costumes duly folded, England is set to retire. Not the football team, although after Sunday's sorry performance against Germany that might be an idea, but the nation itself. For, when England's national team ceases to exist as a viable entity – as it did at the weekend – the nation and, to some extent, its national identity goes with it. Most of the flags that have been brandished these last few weeks will now disappear. When the final whistle blew in Bloemfontein, the ref called time on a 90-minute nation. The flag of St George that was flying over Downing Street on Sunday was replaced by a union flag on Monday morning.

"The imagined community of millions," wrote historian Eric Hobsbawm, "seems more real as a team of 11 named people." But England is more imaginary than most, and only becomes real as a team of 11 people. For better or worse, every other team in the World Cup, from North Korea to Paraguay, boasts the basic tropes of nationhood: a state, a leader, an anthem and an army. Their identification with the national team emerges from their national identity.

But when it comes to English football, that relationship is reversed. This is particularly true because, thanks to the increasing fragmentation of our media experiences, football offers a rare opportunity for the nation to cohere around a single cultural event, however basic and masculine.

Institutionally speaking, England's borders start where those of Scotland, Wales and Northern Ireland end. This difference has been accentuated since devolution. Now the Scots and Welsh have parliaments to give their identities shape, form and fact. But England? Well, England has a football and, to a less popular extent, a rugby team (the English cricket team has included players from the rest of the UK and, currently, even Ireland).

The English regularly confuse Englishness and Britishness, as though the semantics mark a distinction without a difference – but the Welsh and the Scots rarely see it that way. According to the British Attitudes Survey, only 14% of Scots chose "British" as the best or only way to describe themselves, compared to 44% of English people asked. With England now out of the World Cup, many sport fans will immediately have transferred their affections and hopes to Andy Murray at Wimbledon, as though they were backing a horse from the same stable. They're not. Murray is Scottish.

The problem with this is that English identity is a very fragile thing. The re-emergence of the St George's cross as a popular symbol is relatively recent and completely contested. Some have an ambivalent relationship to it. The journey from rightwing totem to national emblem is by no means complete. Whether it signifies a grievance at the absence of nationhood, or a desire for racial and ethnic exclusion, depends on who is waving it and the experience of those who see it. Only in sport does it have any hope of sending a consensual, coherent message.

Unfortunately, English football is an inadequate conduit for such a crucial conversation. For when it comes to football, England just aren't that good. They are not that bad, either – but if a team consistently "underperforms", then logic suggests their performance is commensurate with its ability. Since England won the World Cup in 1966, they have qualified for eight out of 11 World Cup finals, reached the quarter-finals three times and the semi-finals once. "England do just fine. They perform even better than expected, given what they have to start with," wrote Simon Kuper and Stefan Szymanski in their book Why England Lose.

And yet, every previous time England were knocked out, the dominant story seems not to have been a lack of skill, but some freakish incident. The hand of God, an unjust sending off, the miskick that finds only our net – the fluke that shatters the dream with such predictable regularity that the only truly surprising thing is the surprise itself.

The sole reasonable explanation for this dislocation between expectation and reality is a bloated sense of entitlement that England should be better. The harking back to 1966, indulgence in world war metaphors and period costume on the terraces all smacks of anxiety about post-colonial decline. The team, like the nation, lives in the long shadow of its former glory – a reminder that England is not the force on the global stage that it used to be.

In this respect, things do seem to be changing. Sunday's disallowed goal finally gave the nation a legitimate grudge that links football and Germany. In the past, that would have provided comfort to many. But as dusk fell across the country on Sunday night, the consensus seemed to be that England didn't deserve to win. There is a maturity in that despondence.

Meanwhile, English people are defining themselves with increasing precision, suggesting a resurgence in English identity. The BSA survey showed that between 1992 and 2005, the percentage of English people describing themselves as such shot up from 31% to 40%. "Nationalism is not the awakening of nations into self-consciousness," argues Ernest Gellner in Thought and Change. "It invents nations where they did not exist."

In few places is this truer than with Englishness, which is very much a work in progress – although, of course, all national identities are, and football is not always the most coherent way of understanding their trajectory.

After France won the World Cup in 1998, the team's broad racial and ethnic mix was regarded as a turning point in how French society understood its differences, within an official culture in denial of its multiculturalism. "What better example of our unity and our diversity than this magnificent team," said the Socialist prime minister, Lionel Jospin. Yet before the first whistle had blown in 2002, the French electorate was clearly having second thoughts. In presidential elections that year, Jospin was beaten into third place by the French far-right leader, Jean-Marie Le Pen, who won 17% of the votes. This year, the team was riven with racial and religious infighting. President Nicolas Sarkozy has demanded answers and held crisis meetings.

Unlike France, England has yet to make its footballing debacles an affair of state. But then that's not difficult – because England does not have a state.

follow on twitter
RT @MondaviCenter: On Mon, Mar 2 author Gary Younge will speak at @ucdavis about his book `Another Day in the Death of America' as part of…
RT @DrFrancesRyan: EXCITING. #Crippled is out on audiobook today! Ken Loach says it reminds him “what real journalism looks like.” The Gu…
RT @nickhopkinsnews: 'Judge me fairly': man who starved to death's plea to welfare officials https://t.co/4W0qOITxZ4
Activists looking to fine tune your campaign work in a diverse, inclusive environment? Check out @campaigncamp! App… https://t.co/3nfm4Yxutn
"The media has a job to do in terms of insisting on people’s humanity — not restoring their humanity because their… https://t.co/n6Wh3Q1fNd
RT @philipseargeant: Was great to have the opportunity to interview @garyyounge about protest movements & political activism - and at a tim…
RT @GoldsmithsUCU: “Staff & student didn’t cause this crisis. We’re not going to pay this price - the price is too high” @garyyounge tells…
RT @GoldsmithsUCU: “We’re here to make things better and to stop things getting worse” @garyyounge back on our picket lines for the 3rd tim…
See you in the picket line https://t.co/VO6vnDgKFf
RT @Malala: She’s the only friend I’d skip school for. https://t.co/uP0vwF2U3K
© Gary Younge. All Rights reserved, site built with tlc