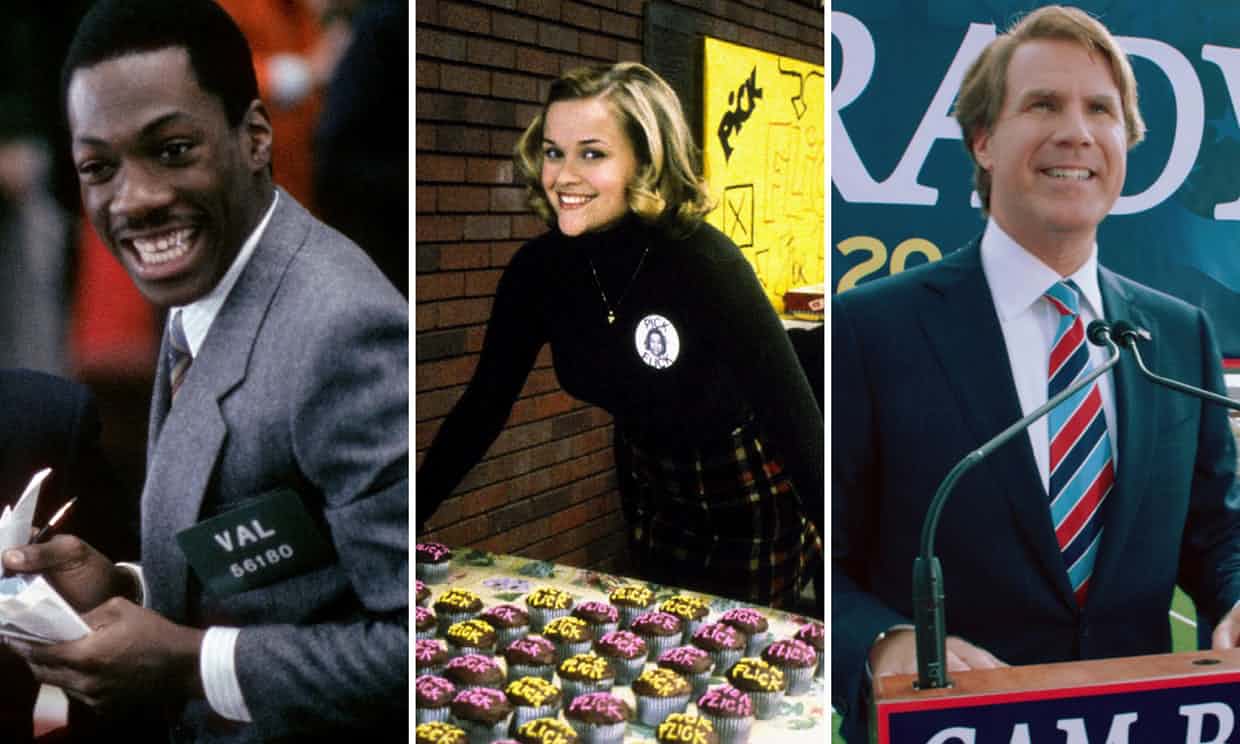 From Trading Places to The Campaign: four films that teach us lessons about the election
The Guardian

“Vote for me, because I don’t even want to go to college, and I don’t care, and as president I won’t do anything. Or don’t vote for me! Who cares? Don’t vote at all!” says Tammy Metzler in Alexander Payne’s Election. Tammy is only running for high school president because the girl she is in love with has run off with her dumb jock brother, Paul. Tammy’s thwarted desire and its consequences are but one glorious strand in this black comedy. This is about a school election, morality, corruption, self-deception and venality. In other words, all politics. It is a movie about the weakness of men when faced with ambitious women, or really any woman at all.

Reece Witherspoon is magnificent as annoying, preppy, over-achiever Tracy Flick. Her campaign slogan is Pick Flick which still seems better to me than anything on offer in this year’s general election.

Jim, her “civics” teacher (a pleasingly deteriorated Matthew Broderick), has something against her winning the presidency. Her affair with his best friend ruined the guy’s career. This doesn’t mean that Jim, while failing to impregnate his wife, doesn’t spend the time lusting after said friend’s wife.

Election reveals politics not as series of rational choices but an inferno of conflicting desires, egos and general confusion. It depicts the male psyche as both jealous and desiring of women, youth and power but seemingly unable to handle any of them.

So Jim makes idealistic speeches about democracy while trying to explain why Paul, the jock, should run against Tracy. Without a decent challenger, he says, there will just be dictatorship. Ring any bells? Democracy is a real choice, he explains, between oranges and apples; to which Paul replies: “I like bananas.”

What has this to do with the upcoming election? Well, currently, politics seems to be utterly disconnected from the forces that give it life. For most people it’s a side issue, and not a very interesting one. Life is full of work, unrequited love and bad choices. The election is presented as a charade and those who lie and cheat win in the end.

This election, with its foregone conclusion, mass evasions and delusions, feels like a charade. There is something of Tracy about Theresa May in her humourless entitlement.

Tracy, of course, ends up in Washington DC. Tammy, the anarchist baby lesbian, also gets a happy ending as she is expelled and sent to an all-girls school. The election is shown as the preserve of a few driven individuals who are just not like the rest of us. Election is funny, nasty and perfectly inappropriate. It is also said to be one Barack Obama’s favourite films. Suzanne Moore

“What’s it all about?” asks the political aide. “America. Jesus. Freedom,” says Cam Brady, the candidate for Hammond, North Carolina, in Jay Roach’s The Campaign, as he waits to run out before adoring crowds.

Whenever I see Theresa May trotting out “strong and stable” or “coalition of chaos” I think of Brady, played by Will Ferrell, rehearsing his lines. The vacuity of his words is no barrier to their effectiveness. They’re the kind of words that have been focus-grouped to within an inch of their meaning. They’re not built to fly as a thought, but to land in the subconscious as a tic. Time and again throughout the movie one sees how little is demanded of politicians and how much they can get away with.

The Campaign, which also stars Zach Galifianakis as Marty Huggins, is a satire on the state of US politics. Two big political donors want to effectively sell the district to China so they can make cheap products there and save on shipping. Brady is a reliable tool. But after he misdials his mistress and leaves a filthy message on the answerphone of an evangelical family as they sit down to pray before dinner, his campaign suffers. The donors look for someone else and settle on Huggins, the hapless son of a local political operative. They give him a fixer, who has a lot to fix; a focus group say the words they most commonly associate with him are “odd”, “clammy”, “probably Serbian” and “looks like the Travelocity gnome”.

There are no direct parallels. Unlike May, Brady is a foul-mouthed, undisciplined womaniser; unlike Jeremy Corbyn, Huggins is new to politics and, initially at least, follows the script his spin doctor writes for him. But there are some points of connection. Brady thinks that he’s running unopposed and his hubris gets the better of him. He makes a series of unforced errors (including punching a baby), loses all sense of proportion, and tries to tarnish Huggins as a terrorist sympathiser. Huggins, despite his obvious shortcomings, proves to be an impressive campaigner and shocks everyone, including himself, when his candidacy becomes a viable proposition. Gary Younge

Films about politics usually take a sour view of our democratic representatives and their motives. The best political films are often morality lessons about society, and there is no better fable about capitalism, power and economics than Frank Capra’s It’s a Wonderful Life.

In the small town of Bedford Falls, the good George Bailey – James Stewart at his sentimental best – gives up all his hopes and dreams to save the powerless and the poor. The grasping avarice of Lionel Barrymore’s Mr Potter – archetypal greed-is-good, eat-what- you-kill capitalist – threatens to take over everything, charging astronomic rents, while planning to rename the town Pottersville and fill it with money-making sleaze, gambling and brothels.

George is about to escape and travel the world, go to college and become an architect, when his father dies and he has to take over his buildings and small bank that lends out cheap mortgages to build decent homes for ordinary people. Potter tries to close it down to force up his rents, seizing his chance to hide a cheque that George’s simple-minded uncle has mislaid. As bankruptcy looms, only the intervention of Clarence the angel stops George killing himself when he finds his own life insurance is all that can save his family.

Here’s the political message: Potter is finally trounced when the people of Bedford Falls rise up and contribute all their savings to stop a run on the bank, rescuing a good mutual to build homes for others.

The parable is a familiar one in movies: the humble poor are always good, the plutocrats are always bad, and self-sacrificing heroes can fight off the darkest forces of capitalism by organising the people.

The mystery is why popular culture – as in folk and religious tales everywhere – celebrates collective action among the downtrodden, demonises big power and big money; and yet in politics it’s so damned hard to persuade people to vote for those same values. In the privacy of the polling booth, a national cognitive dissonance disconnects these popular political ideals from actual voting habits. Ignore that at your peril.

The film was made the year I was born, in the postwar FDR/Attlee glow of belief in the infinite possibilities of the good state. Here’s the grief and the puzzlement: although It’s a Wonderful Life is one of this country’s all-time popular favourites, most of my life I have lived under Conservative governments – and I fear history will repeat itself on Thursday. Potter keeps beating George. Polly Toynbee

It has to be a comedy, doesn’t it? Not that there has been much cheer in a campaign blighted by two terror attacks, but the sheer haplessness of the frontrunner in the 2017 campaign most closely resembles, surely, a slapstick masterpiece by those sultans of shambles, the Keystone Kops.

And yet ineptitude does not tell the whole Theresa May story. There is a fuller narrative arc and for that we must turn to John Landis’s 1980s classic, Trading Places.

It is the tale of a wager made by the Duke brothers, two wicked old masters of high finance. They spot a street hustler, Eddie Murphy, and wonder if such a man would be capable of making just as much money as their blue-chip, pin-striped executive, played by Dan Aykroyd. They decide to organise a swap, one that sees Murphy flourish while Aykroyd is brought low, even to the brink of suicide. But the two pawns in the Dukes’ game have their revenge, plotting a neat little twist on insider dealing that sees the plutocrat brothers lose their vast fortune.

You don’t have to believe that May is set to lose today to see the parallel. For back in mid-April, May was riding high, as politically privileged as the Dukes were wealthy. She had an enormous poll lead in the bank, a working majority in the Commons and a guaranteed further three years in office.

But she decided to take a gamble, just like the Dukes. She bet that she could crush Jeremy Corbyn so comprehensively that she would gain a majority big enough to make the eyes pop; one that would redraw the political map of Britain. But, just like the movie, things started to go wrong.

By the time the campaign was done, May had seen her personal political capital plummet, just as the Dukes were wiped out. All because she took a needless gamble.

Now, of course, there is a difference: the May movie has one more reel to run. She could – and seems likely to – win an enhanced majority after all. Even so, she has seen her personal stock tumble, by playing a game she didn’t have to play. If she could trade places with her earlier self, I bet she would do it. Jonathan Freedland

While polls remain open, and if you are entitled to vote in the election, please refrain from disclosing your voting choices. Any comment declaring how you cast your vote will be removed by moderators owing to restrictions on polls and reporting, set out in article 66A of the Representation of the People Act 1983. Once all polling stations have closed this restriction will be lifted. Thank you for your cooperation.

follow on twitter
RT @MCRSociology: Gary Younge discusses identity politics and America with Will Hutton in this episode of @thewesocietypod https://t.co/72…
RT @mart_welton: Congratulations to all those getting their A-level results today. If you have BBB at A-level or above you can still apply…
RT @BernardineEvari: Please follow the groundbreaking online #MuseumofColour UK, founded by the unstoppable Samenua Sesher. The 1st gallery…
RT @EthnicityUK: Gary Younge is interviewed by @sonikkalogan about his work on racism and gun violence in @the_hindu #DataPoint podcast. h…
RT @thefreedomi: 🚨 NEW: Saudi women’s rights activist & academic Salma al-Shehab was sentenced to 34 years in prison + 34 year travel ban f…
RT @LRB: #DawnFosterForever! On Thursday 15 September at the @LRBbookshop, @BizK1, @piercepenniless, Lynsey Hanley and @garyyounge will d…
RT @ShowunmiV: This is how we support Black women and girls https://t.co/8YmgV21zHo
RT @sonikkalogan: It's #DataPoint Pod Thursday! In this week's episode, I talk to @noraneus, @garyyounge and @Casey_J_Wooten about the U.S.…
RT @bgnoiseuk: Next month, @LRBbookshop will host an event to celebrate the life and work of Dawn Foster with @BizK1, @piercepenniless, Lyn…
Help me Twitter. The quote: ""You can cut all the flowers but you cannot keep Spring from coming." is most commonly… https://t.co/Xs7JkiOEd5
© Gary Younge. All Rights reserved, site built with tlc
How to get zyloprim in the us Cost of stendra at walmart Where to buy generic aromasin Where can i get lamisil cream How much does aldactone cost Where to buy cheap glucotrol Can you take celebrex and naproxen together Addyi pill price How to get prescribed allopurinol Synthroid direct mail order