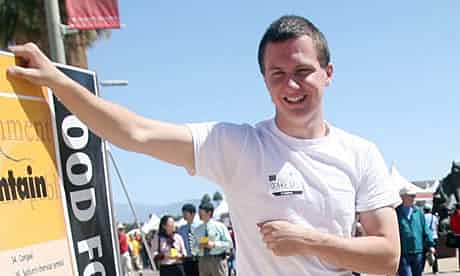 Giffords shooting: an act of political violence in a polarised country
The Guardian,
Photograph: Mamta Popat/AP

Jared Loughner, the suspect in Saturday's shooting spree in Arizona, was not working alone. True, the rampage apparently emerged from his confused, unstable and troubled mind. But it was also the byproduct of a polarised political culture underpinned by increasingly vitriolic, violent and vituperative rhetoric and symbolism.

Fights outside town hall meetings, guns outside rallies, Facebook pages calling for assassinations, discussions about the most propitious moment for armed insurrection. In late October I asked a man in the quaint town of Salida, Colorado, if President Barack Obama had done anything worthwhile. "Well he's increased the guns and ammunitions industry exponentially," he said. "My friends are stockpiling."

To dismiss these as the voices and actions of the marginal was to miss the point and misunderstand the trend. America is more polarised under Obama than it has been in four decades: the week he was elected gun sales leapt 50% year on year.

Where the right is concerned the marginal and the mainstream have rapidly become blurred. Neither the Tea Party nor Obama created these divisions. But over the past two years they have intensified to an alarming degree. Polls last year revealed that a majority of Republicans believe Obama is a Muslim and a socialist who "wants to turn over the sovereignty of the United States to a one-world government" while two-thirds of Republicans either believe or are not sure that the president is "a racist who hates white people", and more than half believe or are not sure that "he was not born in the US" and that he "wants the terrorists to win".

In this alternative reality armed response becomes, if not logical, then at least debatable. After all, if Obama truly were a foreign-born, white-hating terrorist sympathiser who has usurped the presidency, drastic action would make sense. One anti-Obama campaigner carried a placard saying, "It is time to water the tree of liberty"– a reference to Thomas Jefferson's famous quote: "The tree of liberty must be refreshed from time to time with the blood of patriots and tyrants." It's the same quote Timothy McVeigh was wearing on his T-shirt when he was arrested for bombing the Federal Building in Oklahoma City, killing 168 people.

Moreover, many of these extreme views and much of this antagonistic tone is explicitly sustained and implicitly condoned by the Republican hierarchy. When a congressman shouts "liar" at Obama during his state of the union speech he receives a huge spike in donations. Sharron Angle, the Nevada Republican candidate who came close to ousting Democratic leader Harry Reid, once suggested "second amendment remedies" if the Congress continued on its path. The second amendment refers to the right to bear arms.In few places was the national atmosphere played out more dramatically than in the border state of Arizona. In April Raul Grijalva, in Gabrielle Giffords's adjacent constituency, faced bomb threats for opposing a new anti-immigration law. In October, his office was daubed with swastikas and white paint. In August she called police after a man dropped a gun at an event similar to the one she attended on Saturday. A few months ago Sarah Palin, targeting Giffords's marginal constituency, put the seat in crosshairs, and encouraged supporters to "reload and take aim". At the time Giffords explained: "The thing is, the way that she has it depicted — the crosshairs of a gun sight over our district — when people do that, they've got to realise that there's consequences for that action."

The connection between this rhetoric and Saturday's events are not causal but contextual. The shooter was not likely to be acting under direct instructions but in an atmosphere that made such an attack more likely rather than less. Whatever his motives, this was a targetted act of domestic political violence, and that scenario was not only predictable but widely predicted.

In April 2009 a homeland security report on rightwing extremism, Rightwing Extremism: Current Economic and Political Climate Fueling Resurgence in Radicalisation and Recruitment, concluded: "The economic downturn and the election of the first African-American president present unique drivers for rightwing radicalisation and recruitment."It also surmised that "rightwing extremist groups' frustration over a perceived lack of government action on illegal immigration has the potential to incite individuals or small groups toward violence."

As Giffords struggles for her life and the country mourns its dead some insist it is too soon to draw broader political conclusions from this tragedy. But if those conclusions had been understood sooner, it is possible that such a tragedy might have been prevented.