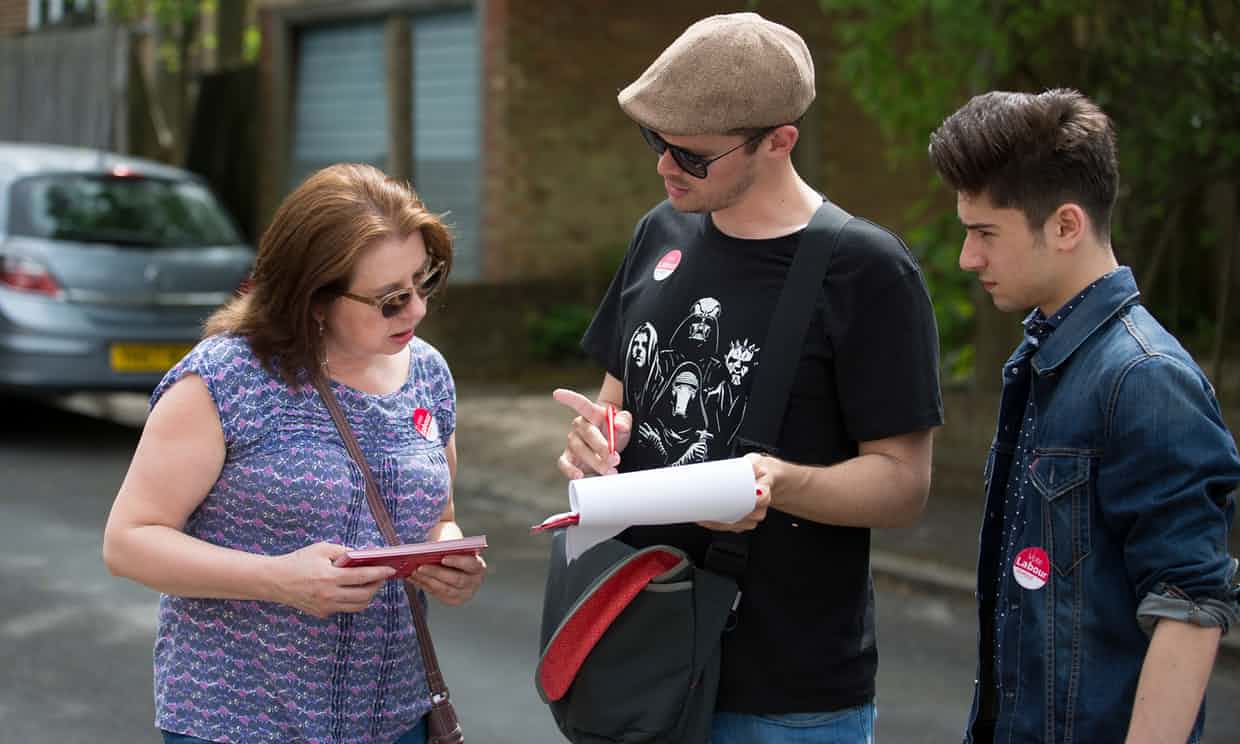 Last April, shortly before Brexit but eight months after Jeremy Corbyn had been made leader of the opposition, Alice Cann, 34, joined the Labour party in Harrow West. “I almost always voted Labour but otherwise wasn’t that aware of all that was going on around politics,” she says. “But Corbyn’s views on the potential of the Labour party and how he wanted to change society matched mine.”

Last weekend Cann went out canvassing for the first time in Headstone South. She was nervous at first but, accompanied by a more experienced campaigner, soon got into the swing; she describes the experience as being “amazing and inspiring”. At one door they met a potential Labour voter uncertain about Corbyn. “He was very knowledgeable but unsure whether he was electable,” she says. They discussed the Labour leader and his shadow cabinet before the man was called away. “It was exactly the kind of conversation people should be having about politics. I didn’t tell him what to do but we had a debate.” Cann left thinking he was likely to vote Labour.

Corbyn’s election changed the Labour party’s fortunes in a range of ways that could impact on the result in Harrow West, a Labour marginal from where I’ll be reporting regularly during the election, which the party has held since 1997. On the one hand, the party grew because of him. In the three months between the general election in May 2015 and the leadership election in August, the local party trebled in size. Some areas kept growing. In Roxeth ward, for example, the number of party members leapt from seven to 102 in a year. Some of those new members, like Cann, are now stuffing envelopes, knocking on doors and spreading the word. But on the other hand Corbyn has been slated by most of the media, has had mostly negative favourability ratings and has faced open revolt within the party, where there has been considerable rancour.

“You do meet people who say they don’t like the leader,” says Pamela Fitzpatrick, a local councillor who was briefly suspended for “uncomradely behaviour” at a meeting only to be reinstated almost immediately. “You meet a lot of people who didn’t like Blair either. I usually ask them, ‘What is it you don’t like about Corbyn?’ Most of the time they don’t know, which is not surprising given how the media portray him.”

Outside Morrisons I met Sharon (she would not give her second name) while writing my first dispatch last week. She is precisely the kind of voter Labour needs to win in a constituency like this. Sharon’s wages have been frozen for at least five years, and as a receptionist at a GP surgery she’s on the frontline. She’s voted Labour before, though she can’t remember the last time or why she switched to Tory. But she won’t be supporting them this time. That’s partly about Brexit, which she supported because of immigration. But there’s more to it than that. “I don’t like Corbyn,” she says. “I just can’t take to him somehow. He’s not a leader.” 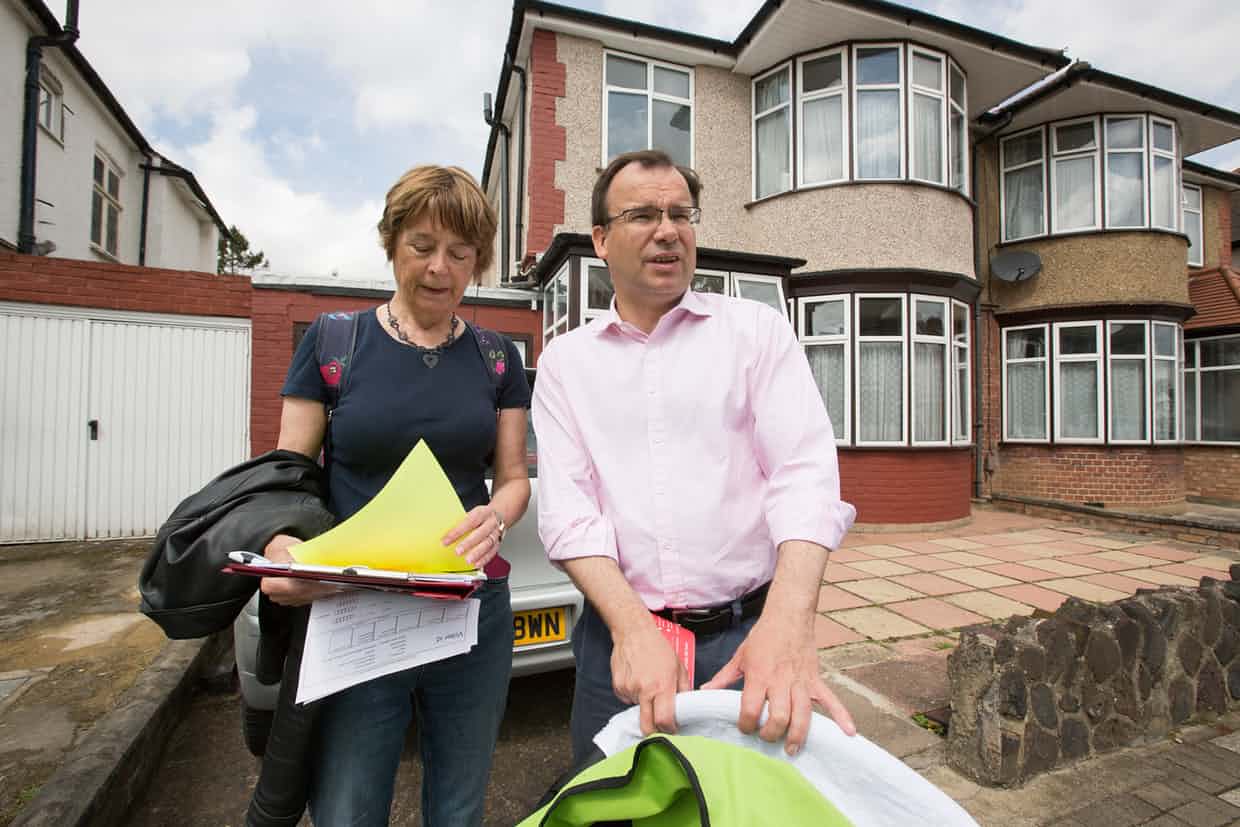 Canvassers for the Labour party out in Harrow with the party’s candidate Gareth Thomas. Photograph: Graeme Robertson for the Guardian

Ben Halinski-Fitzpatrick, 18, took time off his A-level revision to canvass on Tuesday afternoon. He’s a first-time voter and really likes Corbyn. He’d probably be voting Labour anyway – Fitzpatrick is his mum – but it’s unlikely he would be the evangelising force for Labour that he has been among his friends were it not for Corbyn. With the manifesto out that morning, he went from door to door with particular conviction. One man he met worried that Corbyn was unelectable. Halinski-Fitzpatrick asked him about the manifesto. “Forget the personalities,” he implored the voter. “What about the policies?” The man told Halinski-Fitzpatrick he would vote Labour.

In Harrow West, at least, the motivating power of Corbyn – in both directions – can be exaggerated. In a race this tight, every new volunteer helps Labour and many say there are more hands on deck than there used to be. Nonetheless, while a significant number of new members have joined, only a relatively small proportion are out canvassing. Opinions differ on why that would be. Some suggest that new members joined to support Corbyn, not the party, and have left the heavy lifting to the stalwarts – many of whom, incidentally, also support Corbyn.

Others insist that, having joined full of energy and excitement, many new members have been put off by boring meetings, infighting and the lack of any real campaigning. Nadia Karim, 36, never imagined she would join the Labour party after years of being involved in anti-war campaigning. She voted Liberal Democrat in 2010 over tuition fees but otherwise saw electoral politics as a “non-space” when it came to making change. So when John McDonnell evoked the history of the suffragettes movement during his election campaign, she cried and not long after she joined. “People get along fine,” she says. “But it soon became very obvious that there was a clash of campaigning cultures. Some of us wanted to be involved, not just follow orders or a fixed script,” she says.

But while voters raise Corbyn episodically, he does not seem to come up that often. In the three times I have been out with Labour canvassers in recent weeks he was mentioned a handful of times, as opposed to, say, education or housing, which come up a lot. “People are more likely to raise fly-tipping,” says Sue Anderson, a local councillor who was out on Tuesday morning. And when voters do mention Corbyn it’s occasionally because they like him. “He’s a man of the people,” say one. “He’s decent,” says another.

Gareth Thomas, the Labour candidate for the constituency, has a different experience. He says voters “regularly” raise Corbyn on the doorstep and that, more often than not, they do so in negative terms. But, he says: “Some have taken exception to every Labour leader since I was first elected so in this election, as in every election, I am focusing on the issues that will directly affect the lives of those I grew up with and continue to live alongside and bring up my kids with – such as the local hospital, local schools and the impact of Brexit on our local economy and jobs.” 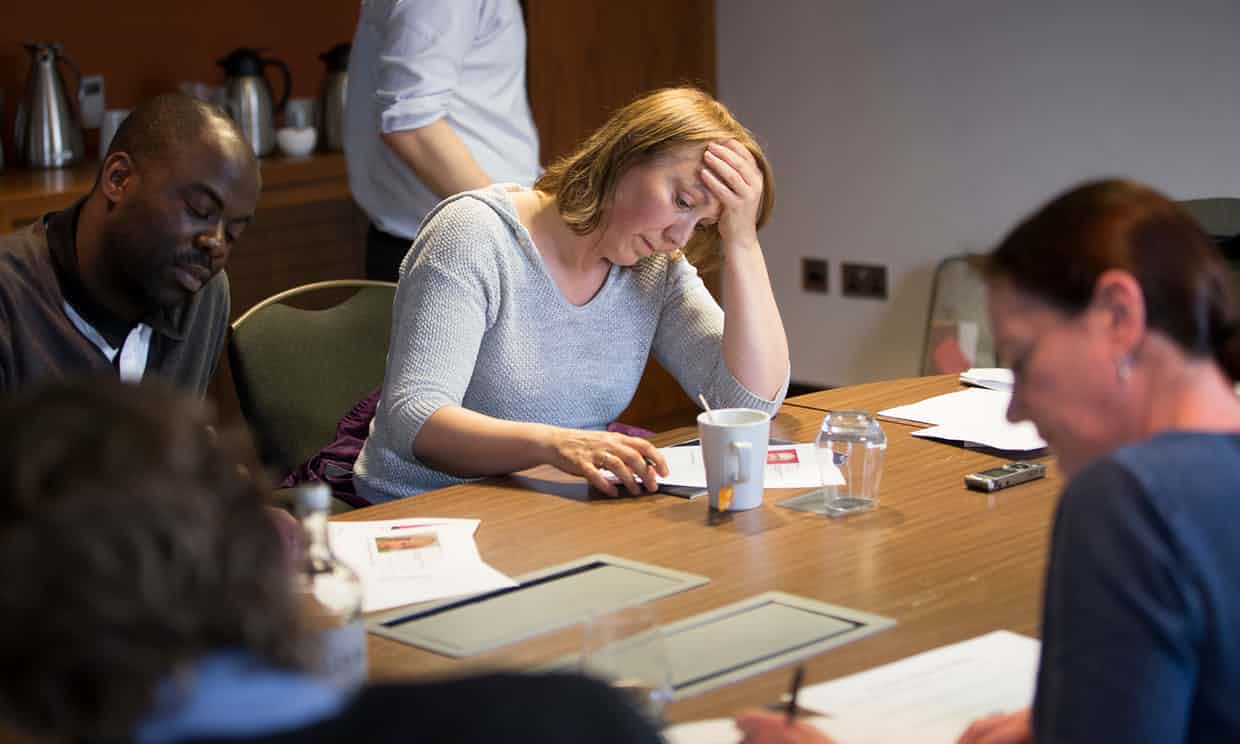 A focus group of undecided voters in nearby Wembley.

A senior Labour official who is not a Corbyn supporter points out that perception of the Labour leader in London may be different. “I think people in London tolerate him or know where to place him or appreciate him for what he is,” he says. “They don’t mind him. But elsewhere they actively dislike him. I think they associate him with everything that’s wrong with London.”

In a meeting room in Wembley, not far from the constituency, a focus group of undecided voters from Harrow West has been pulled together by BritainThinks, which is conducting research with the Guardian throughout the election as part of the Voices and Votes series. The attendees ponder the words they would associate with Corbyn. There are a number of pejoratives including “unfocused” “untidy” and “lack of personality”; some use terms that might describe someone you might like but not necessarily want running the country: “geography teacher,” “ageing uncle” and “nice but ineffective”.

“When you go for a job you’ve got to look the part and be the part,” says one member of the group. “I like the guy, but he doesn’t look like a leader.” But most people are positive. They say he is “a man of principles” “idealist” “honest” and “underestimated”. Men are harder on him than women.

On a human level, they seem to prefer him to May, whom they describe as “uncaring” “untrustworthy” “unpredictable” but also “strong” “clever” and “ambitious”. One voter says: “He’d buy a round, Theresa wouldn’t.” The group is asked if they would trust May to look after their house if they were on holiday. The consensus is: “The house, yes, but not the pets.” When it comes to awarding each leader a mark out of 10, they give Corbyn an average of six and May an average of five.

And their view on him is evolving. While they describe their general reaction to the campaign as “underwhelmed,” and “unengaged”, and characterise it as generally “boring”, the group also seem genuinely impressed by the Labour manifesto, launched that day. A few said while they had originally been sceptical of Corbyn, they had warmed to him during in recent weeks.

But it is not sufficiently evolved that any of them think he is likely to win. Asked to describe how they’d feel if they woke the day after the election to find that May is the prime minister, those leaning towards Labour say: “Disappointed, but not surprised.”