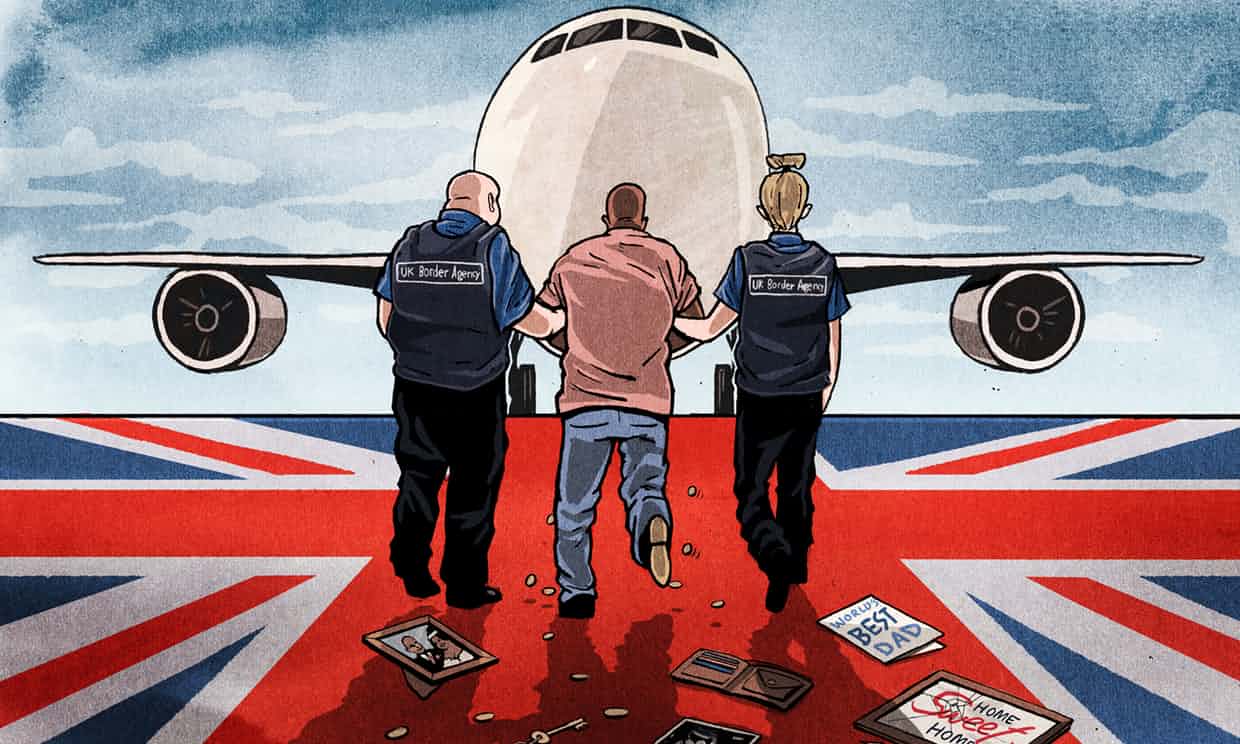 Hounding Commonwealth citizens is no accident. It’s cruelty by design
The Guardian,
Illustration by Ben Jennings

On 4 April Prince Charles opened the Commonwealth Games in Australia’s Gold Coast with a brief reminder of the historical ties that bind. “The ancient stories told by the indigenous people of Australia remind us that, even though we may be half a world away, we are all connected,” he said. “Over the years, these Friendly Games have shown the potential of the Commonwealth to connect people of different backgrounds and nationalities.”

Five days later the Guardian published an article about Michael Braithwaite that illustrates how fragile and selective those connections are. Braithwaite, a Barbadian-born Briton who arrived here in 1961 when he was nine, was educated here, has worked here for his entire life, married here and had three British children and five British grandchildren. He had been a special needs teaching assistant at a north London primary school for over 15 years when his employers launched a “routine” immigration status check. Braithwaite, 66, assumed correctly that he was British.

But now he had to prove it, providing up to four pieces of documentary evidence to the Home Office for every year he had been here. He lost his job when the Home Office failed to issue him with the documents to verify that he was in the country legally. Trying to prove he was who he was, and who nobody ever seriously doubted he always had been, made him ill. “It made me feel like I was an alien. I almost fell apart with the stress,” he said.

Within minutes of the article about Braithwaite going online the Home Office had emailed his lawyers to say the documents had been approved. Welcome to the United Kingdom. With the exception of Northern Ireland, our existence as an island means our physical border is, for the most part, well defined. We stop and start at the water’s edge. The entry points, be they at ports or airports, are heavily fortified and highly militarised.

But our administrative borders are invisible and omnipresent, dividing communities and generations at whim and will. These borders represent not a physical space but a political one that can be reproduced without warning in places of learning and healing. At any moment almost anyone, your boss, doctor, child’s headmaster or landlord, can become a border guard – indeed they may be legally obliged to do so – and on the basis of their judgment you may be denied livelihood, family, home and health.

Incredibly, this is not a glitch in the system. It is the system. And in the words of American intellectual WEB Du Bois: “A system cannot fail those it was never meant to protect.” Braithwaite has become ensnared in deliberate government policy, set out by the prime minister, Theresa May, when she was home secretary, to create a “really hostile environment for illegal immigrants”. The aim was to make life in Britain so onerous for immigrants that those who could not produce the documents at any, random, point in their daily life, would find their life so difficult that they would, in the words of Mitt Romney, “self-deport”.

The policy, set out in the 2014 and 2016 immigration acts, demanded that employers, bank staff, NHS staff, private landlords and a range of other bodies (I have been asked to produce my passport in order to do a book reading at a literary festival) require evidence of people’s citizenship or immigration status. It also introduced a “deport first, appeal later” policy for thousands facing removal who face no “risk of serious irreversible harm”. This, we may assume, is how a South African woman was accused of faking an illness to avoid deportation, only to die five days later.

The acts, implemented first in the year that Ukip won the European elections and then again in the year of the Brexit referendum, were red meat to the grievances of a base that the Tories were losing. We should not be surprised that they are adversely affecting black Britons who have every right to be here, any more than we should have been surprised when there was a rise in Islamophobic attacks following Brexit – even though precious few Muslims in Britain come from elsewhere in Europe.

70 years after Windrush, many Caribbean migrants struggle to justify their existence

And so it is, 70 years after Windrush brought the symbolic arrival of postwar Caribbean migrants, Braithwaite is one of many who now struggle to justify their existence. There’s Renford McIntyre, 64, who came to Britain from Jamaica when he was 14 to join his mum, worked as a tool setter, and is now homeless and unemployed, after he was fired when he couldn’t produce papers to prove his citizenship. Or 61-year-old Paulette Wilson who used to cook for MPs in the House of Commons. She was put in Yarl’s Wood removal centre and then taken to Heathrow for deportation, before a last-minute reprieve prevented her from being sent to Jamaica, which she last visited when she was 10 and where she has no surviving relatives. Or Albert Thompson, a 63-year-old who came from Jamaica as a teenager and has lived in London for 44 years. He was evicted from his council house and has now been denied NHS treatment for his cancer unless he can stump up £54,000, all because they question his immigration status.

Caribbean diplomats have once again called for the Home Office to show compassion. “This is affecting people who came and gave a lifetime of service at a time when the UK was calling for workers and migrants,” explains the Barbados high commissioner, Guy Hewitt. “They came because they were encouraged to come here to help build post-second world war Britain and build it into the multicultural place that it is now.” But if compassion is lacking, common sense would do.

Even as citizenship tests aim to impart to newcomers the “values of toleration and fair play”, immigration laws have sent longstanding citizens, who have paid their taxes and raised their families here, to homeless shelters or deportation centres because they have not been able to provide paperwork issued more than 40 years ago when they were kids.

For, lest we forget, this is also the 50th anniversary of Enoch Powell’s rivers of blood speech: a moment that revealed the galvanising force of populist racism. This mood bleeds effortlessly into immigration policy – the Commonwealth Immigrants Act 1968 was passed the same year, further restricting the future right of entry for former citizens of the empire and loosening the connections about which Prince Charles waxed so lyrical. Braithwaite was one of those “charming, wide-grinning piccaninnies” to which Powell so disparagingly referred.

Arriving in 1961 (in the same year as my parents and coming from the same place) when Barbados was not yet independent, Braithwaite was effectively a British subject when he arrived and his parents would have had passports to that effect. To find himself treated in this way is not just a violation of natural justice – it is an abdication of Britain’s historical responsibility. Since he arrived before 1973, he has an automatic and permanent right to remain. He has violated no law; it is the law that is violating him.