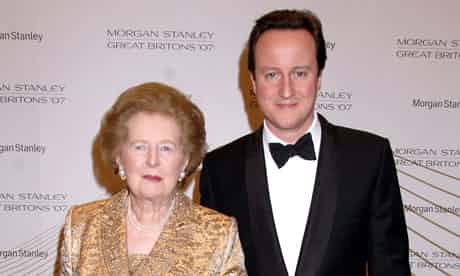 I hate Tories. Not the people who vote for them. But the people they vote for. I make no great claims for that as a political position. But as an electoral category it is crucial. For I'm sure I'm not alone and it's pretty much the only thing keeping Labour going right now. It's certainly the only thing that could get me to the polls on Thursday.

I don't have a phobia about Tories. That would suggest an irrational response. I hate them for a reason. For lots of reasons, actually. For the miners, apartheid, Bobby Sands, Greenham Common, selling council houses, Section 28, lining the pockets of the rich and hammering the poor – to name but a few. I hate them because they hate people I care about. As a young man Cameron looked out on the social carnage of pit closures and mass unemployment, looked at Margaret Thatcher's government and thought, these are my people. When all the debating is done, that is really all I need to know.

But it's not rationality that drives my disdain, it's a negative tribalism. Tories, like Labour, exist only as a political and electoral category. I was raised in the Labour tribe. But over the last 15 years that tribe left me, or rather showed such disdain for me that I felt I had to leave. They did terrible things I did not want to be associated with. I grew to loathe them, too. But there was lament in my loathing. I wanted them to be better. I thought they could be better. I never had much time for the Liberals. By which I mean I never gave them much thought. I didn't want a new tribe, and somehow they never seemed tribal enough. I wanted my old tribe back. This isolation came with regret. Labour left me tribeless. The only way I could define myself electorally was by what I was not. And I am not a Tory.

I don't hate them because they're rich. I grew up among working-class people and now know a fair number of rich ones, too. I see no more inherent moral quality among those who have little money than those who have lots. The fact that Cameron went to Eton is irrelevant. He had no choice in the matter. I hate him because he supports the rich and wants people who go to Eton to enjoy even more breaks than they already have.

Philosophically this is an impotent rage. I also hate them because for a long time they kept winning, and were able to convince more people than we could by appealing to their most base instincts. Because they managed to change the country in a terrible way and reconfigure the political conversation so that some of the more outrageous things they did are now orthodox. The memory of them and the prospect of them make me want to retch.

I would not dignify this as a political sentiment. It's a gastro-intestinal and emotional response. But it's electorally potent. Because unlike others who have written on these pages I can't think of a single morally compelling reason to vote Labour. I have resisted that call for many elections. I can think of a few reasons one might vote Liberal Democrat – an amnesty for immigrants, proportional representation, getting rid of Trident.

Voting is always a balance between the moral and the strategic. What do I want, what can I get and what do I feel comfortable endorsing to get it. In the past the strategic case was weak, because there was no chance of the Tories winning and the moral case was weaker, given Labour's record. That's not true this time.

Indeed the only thing that is really holding my interest at this stage: the one thing that would really make my Friday morning would be to see Cameron crushed and Osborne despondent. To see them miss this own goal and descend into bitter recrimination. To think that however bad things have become, they haven't got so bad that we would make that mistake again. This may be the worst reason for voting. But right now, after watching them all in the debates, it also feels like the only reason in much of the country (apart from where there are good Labour and Liberal MPs).

These feelings are crude. But their object is subtle. The Tories won't lose by accident on Thursday. They'll be defeated by people making careful choices on the basis of what is going in their constituency. Take a look at your constituency, and work it out. I don't think those who refuse to vote tactically are precious. But I do think they're mistaken.