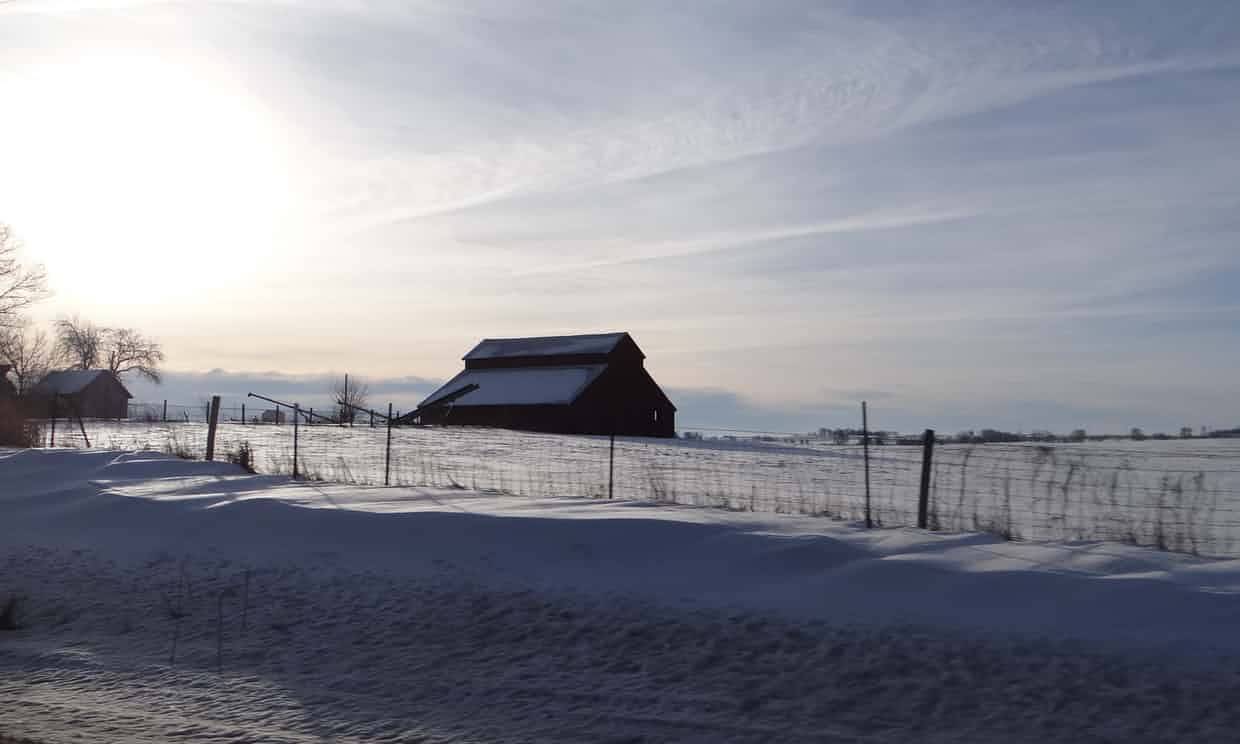 Iowa caucus results are as unpredictable as this bizarre election season
The Guardian,
Photograph: David Taylor for the Guardian

The rural, snow-frosted landscape of Iowa is so sparse, the horizon so broad and the sky so huge that weather can declare itself with great ceremony. Rain, sleet and snow don’t just happen to you here – when the clouds part, you can see them coming.

As Iowans gather at caucus sites on Monday night to be the first people in the United States to help pick the next president, a blizzard will barrel over the plains. By the next morning, it will have dumped several inches of snow on the state as it heads north-west, leaving a trail of chaos and disruption.

This remains about the only clear prediction that anyone can make about what Iowa will look and feel like come Tuesday. This American primary season has been too volatile, dissentious and just plain eccentric for any overconfident forecast prior to the event.

The old rules, regarding financing, policy, gaffes, accuracy and media management, have ceased to apply. In normal times, for a candidate to call himself a socialist”, skip the final debate, denigrate entire religious and national groups or have emails become the subject of a federal inquiry would damage, if not destroy, that candidate’s prospects. An endorsement by Iowa’s main paper, the Des Moines Register, was once universally regarded as a coveted prize; today some see its support of Hillary Clinton and Marco Rubio as a liability that paints them as establishment candidates.

And appearances can be deceptive. Some of the people who waited for close to two hours in sub-freezing temperatures in Marshalltown to see Donald Trump were Democrats who came for the show; others might be categorised as celebrity seekers who had no intention of caucusing.

On a basketball court at Clinton middle school, in the east of the state, as Elton John, the Stones and Adele blared, Billie Selser, who was waiting for Trump, said: “I watched him on TV, on The Apprentice. I’m interested to see what he has to say.” She and her husband Bruce had never voted in a caucus before – and struggled to recall ever having voted in a presidential election. They liked John F Kennedy, they agreed. “And Clinton – Bill Clinton wasn’t bad at all,” Bruce said. Then, asking about Trump, he said: “Is he Democrat, or more Republican?”

In 2004, Howard Dean – like Clinton’s current main rival, “democratic socialist” Bernie Sanders – drew the biggest and most passionate crowds here, ostensibly bringing new young people into the process. Dean finished a distant third when the passionate failed to show up or opted for something they knew was less radical but thought was more achievable.

But none of this means that the old rules may not reassert themselves when it matters – on the night itself. The Iowa caucuses, in which people actually have to show up at a definite time and stick around, are decided by relatively small numbers and carried by the most dedicated and the best organised.

Heather Johnson, a precinct captain for Hillary Clinton in Davenport, has been knocking on doors, calling supporters and galvanising the local faithful for months now. As the week ended, Barb Martney of Marshalltown, a Trump supporter, was still waiting for the campaign to send her the list of those leaning toward Trump in her area so she can remind them to show up. “I’ve asked for a list,” she told National Journal. “And there’s only a few days left, so I hope it’s soon.”

The Des Moines Register’s final poll, which has an impressive track record, gives Clinton a narrow lead over Sanders while Donald Trump holds a slightly wider but by no means unassailable edge over his main rival, conservative Texas senator Ted Cruz, ahead of the rest of the Republican pack.

The campaigns within the two parties have been quite different. With so many candidates and such an iconoclastic frontrunner, the Republicans’ race has been fragmented, fractious, unedifying and at times unhinged – a circular firing squad in which the gunmen episodically shoot themselves in the foot.

But history suggests Iowa Republicans are out of touch – of the last seven contested national caucuses, they have chosen the eventual nominee only three times. Presidents Santorum or Huckabee, anyone?

The Democratic race has been less entertaining and far more substantial and cordial. “We may have differences,” Clinton said of the Sanders divide on Sunday in Des Moines, “but issues is a lot better way to inform the electorate than insults, which is what you’re hearing from the Republicans.” It’s a more genteel version of 2008, with a gravelly, older white man – Sanders – playing a more politically radical, less personally appealing version of Barack Obama, while a more confident Clinton (playing herself) tries to parlay her inability to excite people into a virtue. “I’d rather under-promise and over-deliver,” is her new rally cry. 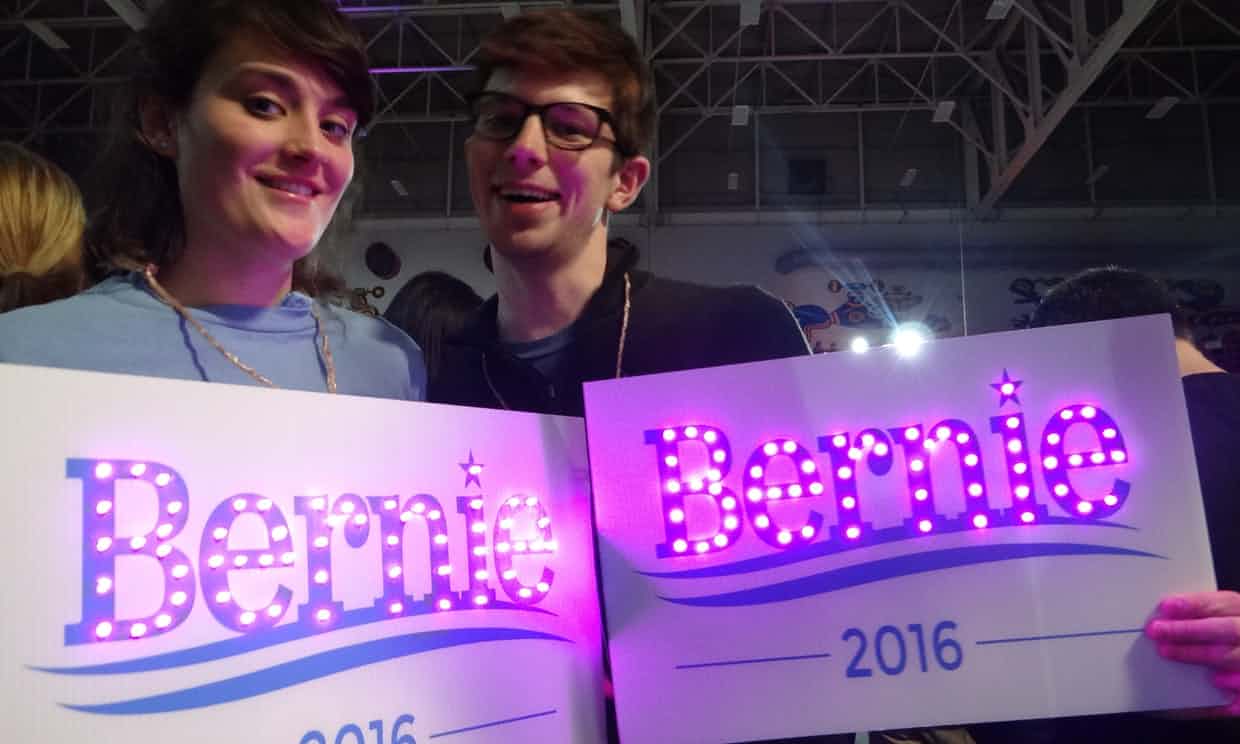 Sarah Gross, 22, and Dillan Newbold, 23, at a Bernie Sanders rally on Saturday night. Photograph: David Taylor for the Guardian

At least Iowa Democrats do tend to have a surer sense of the national pulse. Of the last six contested primaries, Iowans have picked the eventual nominee every time.

Despite the split between Democrats and Republicans, however, the mood dominating the contests in both parties has one common and important trait – nostalgia. Reagan announced a new morning in America; Bill Clinton posed as the boy from Hope at the helm of a “new generation of Democrats”; Obama invoked change. But the campaign themes that seem to be resonating most on both sides this time offer not a route to to a dazzling new tomorrow but a return to the financial securities and generational certainties of the past.

Sanders harnesses anger at the financial class for extorting the nation’s economics and distorting its politics. In the college town of Grinnell on Saturday, Sanders told students that the basic American birthright that each generation will enjoy a life better than the last has been stolen from them and must be recaptured. Some 24 hours later from Des Moines, he followed a star from The Hunger Games onstage: “Let me say it for the umpteenth time – I believe healthcare is a right not a privilege.”

In his signature campaign ad, Sanders doesn’t say a single word beyond his endorsement. Instead, Simon and Garfunkel’s America (released in 1968) plays over scenes of farmers tending their flock, wind turbines spinning over a rural idyll, graphic designers at work, a gay couple in an embrace, families going about their day and people campaigning for him. As they belt out the chorus “They’ve all come to look for America”, you’re left with the sense that the nation is lost and in need of retrieving. It couldn’t be more retro if it were in black and white.

Notably, at Sanders’ climactic rally on Saturday night, young supporters clutching neon pink flashing Bernie signs did not know the song – but they got the sentiment.

Trump, on the other hand, evokes a return to a time when being a white American meant something both at home and abroad – the citizen of an unrivalled superpower, with a monocultural polity, that intervenes in the world with the sole purpose of asserting its supremacy. It’s an era before wars were lost in Muslim lands, white life expectancy started falling, the Latino population started booming and “political correctness” forbade white Christian men from saying whatever came in to their heads.

Outside Trump’s rallies, you can buy hats emblazoned with his slogan “Make America Great Again” and badges stating “Bomb the shit out of Isis” and “Hillary for prison 2016”. They play guitar in cowboy hats.

Oh, there was this as well pic.twitter.com/ftoddKMF9g

Inside, Trump bloviates like a drunk uncle at a barbecue: “The Chinese want to steal everything we have”; “Glenn Beck is a nut job”; “It’s going to be a real wall. It’s going to be a big wall. We can build it so big, so beautiful, so strong, so powerful”; “Obamacare is a disaster, by the way”; “We can’t have people chopping off heads.”

On Sunday afternoon at a gymnasium in Council Bluffs, Trump finally lightened up. His wife, Melania, had finally emerged alongside him, to complement the mogul turned frontrunner as “unbelievable, the best deal maker, the best master negotiator”.

“Thank you, honey,” he said with slightly less bluster, before the snow came in. “That’s so nice.”

Sanders and Trump could not be more different. The former focuses frustration on the powerful, the latter on the powerless. But the source of that frustration is the essentially the same. Wages are stagnant, a generation of wealth has been wiped out, social mobility has stalled, and the government doesn’t work. Sanders rails against big money in politics; one of the things Trump’s supporters like about him is that he’s so rich he can’t be bought.

Sanders and Trump are not the only candidates. But they have set the tone for the campaigns on both sides pulling the field to the left and right, respectively. When they announced their candidacies, conventional wisdom suggested neither was in with a shot. “When we started this we had three people, we had no name recognition and no money, and we were 50 points down in the polls,” said Sanders’ Iowa campaign co-ordinator on Sunday. Now both are viable.

But then, conventional wisdom has counted little in this campaign. These are uncharted waters. And there’s a big storm brewing.