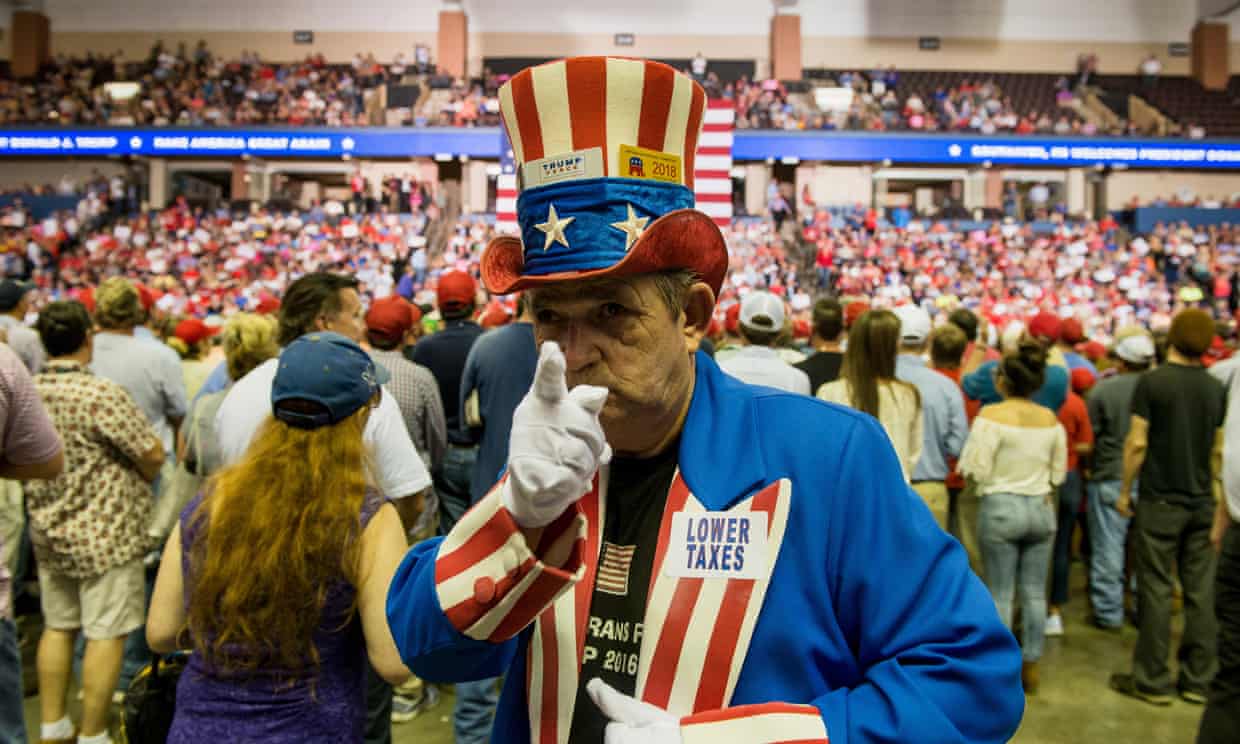 It comes as no shock that the powerful hate ‘identity politics’
The Guardian,
Photograph: Brandon Dill/EPA

Given the political volatility, economic precarity and environmental catastrophe that blight this current moment, there is every reason to be concerned about the durability of modern democracy. Donald Trump, Brexit, growing inequality, melting ice caps, stagnant wages, trade wars, actual wars, immigrants left to die in the sea, all while fascists and their sympathisers sit in government. The threats are everywhere. Some, however, are apparently more obvious than others.

In Britain there are, on an average day, roughly 1,400 sexual assaults on women, 25 hate crimes committed against gay and transgender people, and three attacks against Muslims because of their religion: yet in the last month, the term “identity politics” has appeared in the British press more often than the words patriarchy, homophobia or Islamophobia. It must be serious: people with platforms keep saying it is.

Finding a working definition for this ostensible scourge is not easy. Depending on who is disparaging it, identity politics can mean: appealing to people on the basis of a shared identity, such as race, gender or sexual orientation; reducing politics to individual experience; leveraging identities for sectional gain; or, at times, just diversity, difference, “feminism”, “anti-racist activism”, or anything else not explicitly related to class. Everybody who uses the term thinks they understand what they mean by it. When people are asked to specify what they mean, it often turns out the answer could include the suffrage movement, Martin Luther King, Donald Trump or the Catalan independence movement.

It is because its definition is so flabby and its application so opportunistic that the term can be used in such a cavalier fashion, and with such apocalyptic overtones. Identity politics, like multiculturalism or political correctness, is one of those terms that has come to mean whatever you want it to mean, so long as you don’t like it. The term itself should be retired. It is no longer worth claiming or critiquing, not because there is nothing to interrogate about the role of identity in politics, but because the term itself has become an obstacle to that interrogation.

There is always identity in politics. Nobody comes to the world from a vacuum. It would be absurd to believe that if I were born a girl in Bangladesh, or to a farming family in interwar Romania, I would have the worldview I actually have. “Every human being at every stage of history … is born into a society and from his earliest years is moulded by that society,” writes EH Carr in Society and the Individual. “Both language and environment help to determine the character of his thought; his earliest ideas come to him from others … the individual apart from society would be both speechless and mindless.”

The trouble is, not all identities count as equal. The more power they carry, the less likely the carrier is to be aware of it as an identity at all. Nobody asks me: “When did you come out as straight?” or “How did you balance travelling as a foreign correspondent with raising children?” because straight men don’t get asked that. What is often dismissed as “identity politics” might be more accurately just called “politics” originating from the concerns of less advantaged groups.

It’s not difficult to see why the right has a problem with this. Their agenda is centred on preserving and extending privileges that already exist. Denigrating equal rights campaigners as “grievance politics” practitioners, the irony is that they practise the very methods they lampoon. Railing against liberal elites, feminists, migrants and Muslims, they have cornered the market in victimhood. Trump’s presidential campaign made an unvarnished appeal to white, Christian Americans – what is that if not an identity?

The left has always been more confused. Those with a crude notion of class contend that politics driven by identity divides people, dilutes solidarity, and diverts energy from addressing material concerns such as pay and conditions. This fundamentally misunderstands identity, politics and class.

When British women are being paid 18% less than men, gender is a material concern; when for every $100 in wealth a white person has in the US an African-American has just $5, race is a material issue. Likewise, if there is no lift and you’re disabled. If you can’t get married to the person you love and can’t leave them your pension, sexual orientation is a material issue. If you can’t walk down the street without fear of the police stopping, searching or shooting you, or if you cannot control decisions about your own fertility, those are material issues. Acknowledging diversity does not undermine solidarity. Indeed by rendering it more inclusive and better informed, it should make that solidarity more effective. “Labour in the white skin,” wrote that flaky identity hipster, Karl Marx, “can never free itself as long as labour in the black skin is branded.”

The fact that the role of identity in politics doesn’t amount to the problem many describe doesn’t mean there’s not a problem. Some people do mistake the mantra “the personal is political” for the “emotional is empirical”, mistaking their discomfort, disgust or sense of isolation for a political event in itself, thereby eviscerating identity of its collective meaning, and reducing politics to individual feelings that may well be valid but can rarely be engaged.

Others insist that what you are should determine what you should do and how you should think and act. Vote a certain way, support a certain policy or make a certain argument and you will find yourself branded anti-American, an Uncle Tom or a class traitor. A Jewish policy expert, only half in jest, once told me that those Jews who did not agree with the establishment of Israel, were really of “Jewish extraction”: “They’ve had the Jewishness extracted out of them,” he said. In this climate, identity does not only inform an argument, it denies any possibility of a counter-argument. People can silence any opposition simply by insisting: “I’ve been through it, I know.” The idea that others who had been through it might have different interpretations, or that those who didn’t might have valid things to contribute, are then brushed aside.

These are all issues to contend with when contemplating the role of identity in politics. But quite how we get from here to the “threat to liberal democracy” is a mystery. A century after some women got the vote in Britain, and 50 years after the US Civil Rights Act, it is as good a time as any to understand that were it not for people mobilising on the basis of their identity, we wouldn’t have a liberal democracy at all.