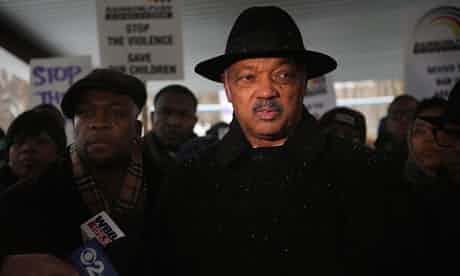 The Rev Jesse Jackson has appealed to Barack Obama to "please come home" to Chicago and address the crisis in American urban life following the fatal shooting of a teenager less than a mile from Obama's house in the city.

"The president's voice is so urgently needed here," said Jackson, arguing that Obama's presence would help draw attention to the complexity of the economic and social problems affecting areas like Chicago that compound problems related to gun violence. "[That alone] would illuminate the condition."

At a press conference at his Rainbow/Push headquarters, Jackson insisted that the importation of guns and drugs from outside Chicago – and the export of jobs out – elevated any remedy beyond being simply a city problem that could be tackled by more aggressive or intensive policing.

"You cannot police poverty. You cannot police broken dreams, you cannot police aspirations," said Jackson. "This cannot be dealt with on just a citywide level. We have drugs and guns coming in, and jobs going out. In most of the areas where these shootings are taking place, the unemployment rate is between 45% and 55%."

Jackson led a march of around 100 people through the South Side of Chicago to the park where 15-year-old Hadiya Pendleton was shot earlier this week. In January alone, 43 people were shot dead in Chicago, Obama's hometown, making it the deadliest January in the city for more than a decade.

"My greatest fear in Chicago is that we might be adjusting to it," said Jackson. "We might be taking death for granted."

Hadiya had gone to park after taking her final exams on Tuesday and huddled under a canopy to get out of the rain. Police say a gunman approached and started shooting, killing Hadiya.

"Hadiya wanted to make a difference in the world," said Shatira Wilks, a spokeswoman for the family. "It's unfortunate that it would be like this but we still hope that this can make a difference." 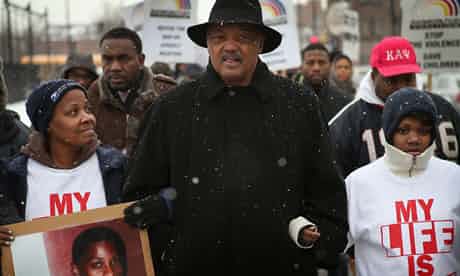 About 100 people braved the cold to attend the march. Photograph: Scott Olson/Getty Images

The murder of Hadiya, a member of her school band, and who performed at the president's inauguration last month, has focused nationwide attention on the shooting epidemic in Chicago.

Illinois senator, Richard Durbin, raised the case during a Senate judiciary committee hearing on gun violence the day after Hadiya's death. "We have guns everywhere," he said. "And some believe the solution is more guns. I disagree."

"There was something about Sandy Hook that was maybe a tipping point," said Jackson, referring to the shooting of 20 children in an elementary school in Connecticut in December. "We were making the case, but we couldn't make that case here until then. Then the case of Hadiya Pendleton has given us another opportunity."

John Hampton, a West Side Chicago resident who took part in the march, said there was only so much that Obama could do and that it was up for communities now to police themselves more effectively.

"We have to circle the wagons," he said. "We need to find who did this and turn them in. Otherwise it's like a cancer that will keep metastasizing and spreading. We have to deal with is ourselves."

Jackson's is just the latest appeal to Obama to return to Chicago to address the issue. A petition has been drawn up calling on the president to attend Hadiya's funeral. "As Newtown swirls down the memory hole," it begins, continuing, "President Obama should stand up and take advantage of a tragic opportunity to keep the anti-gun violence movement engaged."

Louis Farrakhan, the leader of the Nation of Islam, has also asked the president to return.

The president, who has said that his prayers are with Hadiya's family, has twice mentioned the high murder rate in Chicago during speeches in his campaign for gun control legislation.