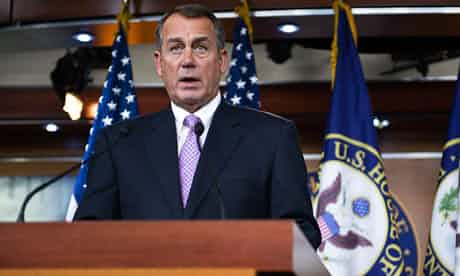 Before British prime minister David Cameron went into his fateful European Union negotiations regarding the euro earlier this month, it is said he used the "full bladder technique". To concentrate the mind on the task at hand he remained "desperate for a pee" throughout both the formal dinner and talks. When it came to sealing the deal he subsequently went and pissed Britain's bargaining position up the wall.

One can only guess what John Boehner's strategy has been during the past week over the payroll tax cuts. But it looks like he employed the "full bowel technique" with equal success. His Tea Party caucus kept stuffing him with rhetorical bran muffins so that every time he went to a microphone he was full of it. Then, when crunch time arrived, the Republican establishment, the White House and Democrats in Congress teamed up and beat the crap out of him.

The Republican party's internal division and public humiliation this week felt like a moment that was such a long time coming it seemed as though it would never arrive. But the ramifications are not limited to Congress. The very mayhem that has been evident in Washington DC this week has been playing out in Iowa and New Hampshire these past few months, and will continue through the coming presidential year. Adrenalin could keep the Tea Party going only so long outside the fetid ecosystem of Fox News, talk radio and the internet, before reality intervened and forced some kind of reckoning. They can't have everything they want, and won't take the considerable amount they can get. So they cast around from crisis to crisis and candidate to candidate exploding with rage and imploding with contradictions until there's very little left but the venom.

This most recent debacle was perhaps the most spectacular unraveling yet – the congressional equivalent of Rick Perry's oops moment. Republicans in the Senate had reached an agreement with the Democrats to extend the temporary payroll tax cut for a further two months while the two sides hammer out the details for a longer-term resolution on how to pay for it. To an average family this means about $80 a month more coming into their bank accounts as they come out of the Christmas season. Most assumed it would fly through the Republican-controlled House. After all, it's a tax cut. Republicans like tax cuts. Indeed, sometimes it seems that's all they like. The Senate went home. But the Republicans in the House decided it wasn't enough. They wanted more. And so Boehner had to go out and demand more. He talked tough. But he also talked nonsense. In the name of smaller government he was insisting on higher taxes. Even his Republican colleagues in the Senate would not buy it; the Democrats wouldn't wear it; the country couldn't afford it. He marched them up to the top of the hill, where they were shot at by their own troops, and then he marched them down again. Oops.

Threats of government shutdowns and legislative crises have become so routine since the Republicans took over the House and the Tea Party took over the Republicans that it's become difficult to take them seriously. Whether it's budget talks or the debt ceiling, the impasse follows a predictable pattern. Both Obama and the Republicans stake out a position. Obama then caves in on pretty much everything in return for letting it look as though he is running the country. Then the Republicans come back and ask for more. Obama draws a line in the sand. "Eric, don't call my bluff," he told House majority leader, Eric Cantor, during the budget talks. "This may bring my presidency down, but I will not yield on this." Eric called his buff. Obama yielded. The line is washed away and the president lives to capitulate another day.

But this time there was nothing more to yield. Obama had already caved to the Senate Republicans, by abandoning his demand that the cuts be funded by raising taxes on millionaires. What House Republicans were rejecting was already a bipartisan agreement between an overpliant White House and an overreaching GOP. What Boehner demanded was a tripartisan agreement between the Republicans, the Democrats and the Tea Party. This time that was not possible.

Having put a gun to the head of the economy several times unless millionaires kept their tax cuts, this time Boehner was holding middle-class families hostage and threatening them with tax hikes unless … and there was the problem. No one really understood what he wanted – apart from to have his own way. It was not until he found himself in the crosshairs of the entire political class that he realized he'd already shot himself in the foot.

This reflects the confusion that is taking place in the primary race. The Tea Party keeps thrashing around for someone, anyone, in whom they can invest their zeal and who the rest of their party (never mind the rest of the country) can live with. They've pretty much been through the pack and just when you think they've hit bottom they plumb new depths. It turns out there is no one who both makes sense to the Tea Party and the rest of the world, let alone their fellow Republicans. These are the people who have been dictating the pace and shape of economic reform for the last year. These are the birthers who believe in death panels, hate government intrusion unless it involves a woman's uterus and love wars and tax cuts but hate budget deficits. They are also the people who have re-energised the Republican party from its post-McCain torpor and revitalized its fortunes in 2010. They are the reason Obama still has a shot at the presidency and why Romney is still struggling for the nomination. They are the muffin peddlers; and they think with their gut.

follow on twitter
RT @MCRSociology: Gary Younge discusses identity politics and America with Will Hutton in this episode of @thewesocietypod https://t.co/72…
RT @mart_welton: Congratulations to all those getting their A-level results today. If you have BBB at A-level or above you can still apply…
RT @BernardineEvari: Please follow the groundbreaking online #MuseumofColour UK, founded by the unstoppable Samenua Sesher. The 1st gallery…
RT @EthnicityUK: Gary Younge is interviewed by @sonikkalogan about his work on racism and gun violence in @the_hindu #DataPoint podcast. h…
RT @thefreedomi: 🚨 NEW: Saudi women’s rights activist & academic Salma al-Shehab was sentenced to 34 years in prison + 34 year travel ban f…
RT @LRB: #DawnFosterForever! On Thursday 15 September at the @LRBbookshop, @BizK1, @piercepenniless, Lynsey Hanley and @garyyounge will d…
RT @ShowunmiV: This is how we support Black women and girls https://t.co/8YmgV21zHo
RT @sonikkalogan: It's #DataPoint Pod Thursday! In this week's episode, I talk to @noraneus, @garyyounge and @Casey_J_Wooten about the U.S.…
RT @bgnoiseuk: Next month, @LRBbookshop will host an event to celebrate the life and work of Dawn Foster with @BizK1, @piercepenniless, Lyn…
Help me Twitter. The quote: ""You can cut all the flowers but you cannot keep Spring from coming." is most commonly… https://t.co/Xs7JkiOEd5
© Gary Younge. All Rights reserved, site built with tlc
Can i buy cellcept Lotrisone street price Buy verapamil online without a prescription What do you need to buy eldepryl Lamisil cvs price Antabuse buy Caduet online usa Stromectol online brighter tomorrow How to get namenda without prescription Buy trazodone online usa