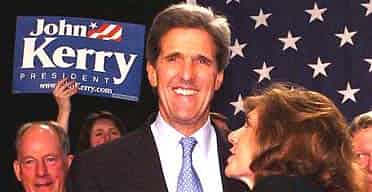 John Edwards emerged as the principal rival by scoring a convincing win in South Carolina, while General Wesley Clark managed to stay in the race by declaring a wafer-thin victory in Oklahoma.

The election night also claimed victims. Joe Lieberman pulled out of the contest late last night after being thrashed by Senator Kerry in Delaware, the only state he had a hope of winning. "Today the voters have rendered their verdict and I accept it," Mr Lieberman said.

Howard Dean was the other big loser. He had scarcely campaigned in the seven states voting yesterday, mostly because of lack of funds. But his camp had expected to him to perform better than he did, because of his radical appeal and strong state organisations. In the end, he came in a poor third in every state except Oklahoma and South Carolina, where he finished fifth.

The other state voting on Saturday, Michigan, now looks out of Mr Dean's reach, as Senator Kerry has extended his lead in the polls to 40%.

Senator Kerry was also in Washington state last night, arriving in Seattle in triumph, to meet a ballroom full of supporters.

"This is fantastic," he said. "We won from the east coast to the south-west and north-west; and we came in a strong second in South Carolina; and in a close race in Oklahoma."

Senator Kerry claimed he had been outspent by five to one by Gen Clark in Oklahoma and by the same ratio by Senator Edwards in South Carolina.

"He only ran in only two states in today's races - South Carolina and Oklahoma - and he's indicating he's only going to run seriously now in Tennessee and Virginia," David Wade, a Kerry spokesman said yesterday.

"John Kerry is going to be a national candidate. If you're going to be president of the United States, you've got to run everywhere."

Senator Kerry won crushing , double-digit, victories in Missouri and Arizona - the two biggest prizes in terms of delegates to the Democratic convention in July - as well as in three smaller states: New Mexico, Delaware and North Dakota.

Senator Edwards' win in South Carolina was just as convincing, however. He beat Mr Kerry by 46% to 30%. The victory and his surprise close second place in Oklahoma, kept him firmly in contention, while denying Mr Kerry the clean sweep that would have effectively ended the race.

Senator Edwards, who was born in South Carolina, portrayed his win as bigger than a local phenomenon.

"I think South Carolina is a great test for winning in the south, winning among rural voters and winning among the African-American voters," he said last night.

Gen Clark's margin in Oklahoma was only 1,200 votes, and had yet to be officially confirmed yesterday. However, he embraced it like the lifeline it was to his campaign.

"I won a state and I'm just thrilled," he declared. He announced he was going to travel to Tennessee and Virginia, which hold primaries next Tuesday, to compete with Senator Edwards for primacy in the south.

Before that, Michigan and Washington state will vote this weekend, testing the ability of the two southerners to compete outside the region. The two races will also be a test of whether there is any life left in the Dean campaign, which looked like an unstoppable juggernaut only a few weeks ago.

In his first serious test among black voters, the only African-American candidate in the race, the Rev Al Sharpton, attracted 18% of black support. But with negligible backing among whites, he barely scored 10%.

African-American voters were evenly split between Mr Edwards (37%) and Mr Kerry (34%) with Mr Sharpton third with 18%.

Mr Kerry's performances last night should quell concerns about his ability to attract minority support, particularly among African Americans who comprise the core of the Democratic base.

Mr Edwards had staked everything on winning in South Carolina, spending more time in the state than any other candidate, with the exception of Mr Sharpton, and insisting he would bow out unless he won.

His campaign made great play of his southern roots; he was born in the state and serves as senator in neighbouring North Carolina. "The south is not George Bush's backyard," said Mr Edwards, who performed best among white moderates. "It's my backyard, and I can beat him in my own backyard." Another important constituency to have emerged during this campaign, particularly for Mr Kerry and Gen Clark, has been Vietnam veterans. Seven in 10 Oklahoma voters, and nearly as many in South Carolina, said they had served in the military or have somebody in their households who did.

Saturday's contests in Michigan and Washington states will be followed by primaries in Tennessee and Virginia next Tuesday. The contest will almost certainly remain competitive until March 2, when delegate-rich California, Georgia, New York and Ohio join six other states on what has become known as Super Tuesday.

follow on twitter
RT @BernardineEvari: Please follow the groundbreaking online #MuseumofColour UK, founded by the unstoppable Samenua Sesher. The 1st gallery…
RT @EthnicityUK: Gary Younge is interviewed by @sonikkalogan about his work on racism and gun violence in @the_hindu #DataPoint podcast. h…
RT @thefreedomi: 🚨 NEW: Saudi women’s rights activist & academic Salma al-Shehab was sentenced to 34 years in prison + 34 year travel ban f…
RT @LRB: #DawnFosterForever! On Thursday 15 September at the @LRBbookshop, @BizK1, @piercepenniless, Lynsey Hanley and @garyyounge will d…
RT @ShowunmiV: This is how we support Black women and girls https://t.co/8YmgV21zHo
RT @sonikkalogan: It's #DataPoint Pod Thursday! In this week's episode, I talk to @noraneus, @garyyounge and @Casey_J_Wooten about the U.S.…
RT @bgnoiseuk: Next month, @LRBbookshop will host an event to celebrate the life and work of Dawn Foster with @BizK1, @piercepenniless, Lyn…
Help me Twitter. The quote: ""You can cut all the flowers but you cannot keep Spring from coming." is most commonly… https://t.co/Xs7JkiOEd5
RT @the_hindu: #DataPoint | This Thursday, @sonikkalogan takes a look at the #US gun violence epidemic, as mass shootings continue to grow…
City workers get double-digit wage rises while lowest-paid see 1% increase - “Them’s the breaks” https://t.co/XeVyG72iA5
© Gary Younge. All Rights reserved, site built with tlc
Where to buy myambutol online What do you need to buy eldepryl Jalyn online Buy vasotec with prescription Can i get cleocin over the counter How to buy lasix online Pradaxa 15 0mg capsule price Can u buy atacand over the counter Can you buy mobic over the counter usa Can you get proscar without a prescription