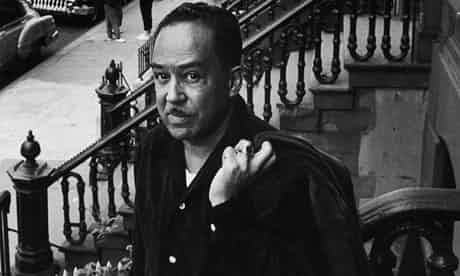 Langston Hughes showed me what it meant to be a black writer
The Guardian,
Photograph by Robert W Kelley/Time & Life Pictures/Getty Images

One of my first columns on these pages didn't make it into the paper. I'd written about the Nato bombing of Bosnia and the comment editor at the time thought I should stick to subjects closer to home. "We have people who can write about Bosnia," he said. "Can you add an ethnic sensibility to this."

The whole point of having a black columnist, he thought, was to write about black issues. I had other ideas. I had no problem writing about race. It's an important subject that deserves scrutiny to which I've given considerable thought and about which I've done a considerable amount of research. I have no problem being regarded as a black writer. It's an adjective not an epithet. In the words of Toni Morrison, when asked if she found it limiting to be described as a black woman writer: "I'm already discredited. I'm already politicised, before I get out of the gate. I can accept the labels because being a black woman writer is not a shallow place but a rich place to write from. It doesn't limit my imagination, it expands it."

But that was not all I wanted to write about or what I imagined the function of a black columnist to be. It wasn't, in short, the only adjective available and I had no interest in being confined by it. The fear of being pigeon-holed is one of the crippling anxieties of any minority. Being seen only as the thing that makes you different through the lens of those with the power to make that difference matter really is limiting. Instead of crafting your own narrative, you get a bit part from central casting in someone else's play.

It was thanks to Langston Hughes's 1926 essay The Negro Artist and the Racial Mountain, written for the Nation magazine (full disclosure: I write a column in the Nation), which I read shortly after university, that I was able to centre myself within these apparently conflicting demands. Hughes, an African-American poet and essayist from the Harlem renaissance period of the early 20th century, was every bit the renaissance man. Raised in poverty in Kentucky, he wrote plays, worked as a merchant seaman, covered the Spanish civil war for the black press and toured central Asia after plans for a visit to the Soviet Union to put on a musical collapsed.

He was a young, gay black man who was always going places precisely because he did not know his place. And that fearlessness is applied to The Negro Artist and the Racial Mountain, which is effectively a manifesto for black writers who feel hemmed in by strictures imposed by the race thinking of both blacks and whites. What he makes clear is that the task of a black writer was no different from that of any other writer – to write the best work they could about whatever they wanted, while resisting the pressure to be defined by the racial agendas of others.

The essay starts with him relating an encounter with "one of the most promising young negro poets" who once told him: "I want to be a poet – not a negro poet." Hughes reflects: "And I was sorry the young man said that, for no great poet has ever been afraid of being himself … This is the mountain standing in the way of any true negro art in America – this urge within the race toward whiteness, the desire to pour racial individuality into the mould of American standardisation, and to be as little negro and as much American as possible."

The fact that much of the essay – its language, assumptions and even at times framing – feels dated added to the appeal for me. Having grown up in Stevenage and studied in Edinburgh I had not been around enough black people to know that what I was experiencing was neither unique nor new. Clearly, rereading it now, I got out of it what I wanted and discarded the rest. Though the essay explicitly defines the "mountain" as an "urge towards whiteness" I understood it then and now somewhat differently. Not only to withstand the urge towards whiteness but also to resist any mould that was not of your own making, regardless of who made it. To refuse to wear any old suit that didn't fit just because it was given to you and the donor said it suited you.

That means not being in flight from blackness even when it is a category employed more in disparagement than description but acknowledging it as a condition within the human rainbow that is no more or less valid than any other. "I am ashamed for the black poet who says, 'I want to be a poet, not a negro poet', as though his own racial world were not as interesting as any other world."

But while acknowledging race as one legitimate category among many, it also meant not fetishising blackness; playing to a gallery whose appreciation was no less clouded by the same limitations, even when conveying different impulses. The last paragraph I read as a rallying cry against pressures from all sides to conform – a compass for choppy racial waters: "We younger negro artists who create, now intend to express our individual dark-skinned selves without fear or shame," Hughes wrote. "If white people are pleased we are glad. If they are not, it doesn't matter. We know we are beautiful. And ugly too. The tom-tom cries and the tom-tom laughs. If coloured people are pleased we are glad. If they are not, their displeasure doesn't matter either. We build our temples for tomorrow, strong as we know how, and we stand on top of the mountain, free within ourselves."

follow on twitter
RT @meghanetinsley: Please join @movementsMcr on 9th June for what promises to be a fantastic discussion on anti-racist, anti-colonial acti…
RT @prospect_clark: 1. It’s been a privilege to edit @prospect_uk over the last 5 years Having moved to Yorkshire last summer, it’s now t…
RT @ManchesterUP: Massively deserved recognition - @LukeEdeNoronha's 'Deporting Black Britons' has been shortlisted for @britsoci Philip Ab…
RT @MsJeanRhys: So dull. I wish I could send a million dollars. A million dollars of Love.
Thank you Glasgow. https://t.co/qba4R3WSoR
RT @AlexCKaufman: A Black woman in Indianapolis had her home appraised twice at $110,000 and $125,000. She suspected she was being lowballe…
RT @blissbroyard: I was delighted to participate in this @BBCRadio4 radio documentary about the vagaries of racial identity and passing. Fa…
RT @HousmansBooks: 📢Pleased to announce a joint event with radical publishers @haymarketbooks 🔥Three outsanding speakers: @HarshaWalia in…
RT @Marie_MBallaNdi: Free webminar on how news media can advance diversity and inclusion! Journalists, educators, scholars and students! Re…
RT @shattenstone: And for old time's sake @garyyounge. When we were young(e) https://t.co/dSbmC7qPRB
© Gary Younge. All Rights reserved, site built with tlc