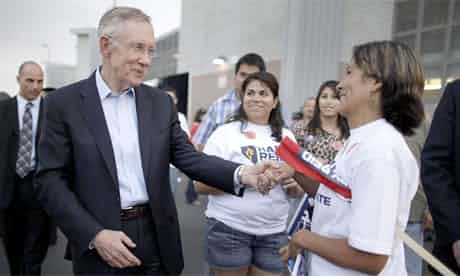 Latino voters could swing the midterms
The Guardian

There is an episode of 30 Rock in which the rightwing CEO of a TV station, Jack Donaghy (played by Alec Baldwin), gives up trying to get his black employee, Tracy Jordan, to record a pro-Republican ad and persuades him instead to put out a call for blacks to simply not bother going to the polls at all.

"Black people: don't vote! Just don't do it! In the amount of time it'd take for you to vote, you could play three games of pool. Three! And that's fresh. I'm Tracy Jordan, and I improved this message."

A female announcer ends the appeal with the words: "Paid for by the Committee to Re-invade Vietnam."

Last week, a Conservative lobbyist produced an ad in Nevada calling on Latinos not to vote which Tracy Jordan would have been proud of. "If we just go on supporting [Democrats] again this November, they will keep playing games with our future and taking our vote for granted. Don't vote this November. This is the only way to send them a clear message."

Some stations refused to air the ad, paid for by Latinos for Reform, which is led by conservative activist Robert de Posada, others took it down and, before the day was out, it had been withdrawn. But to some extent, the damage had been done. The question is to whom?

Latinos comprise close to 15% of the Nevada electorate, almost double the proportion they did in 2004. And, given the relatively younger age of the Latino population and their higher fertility rates, that number is only going to grow. In 2008, Latinos broke 76% in Nevada in favour of Barack Obama and 67% nationally.

In a senatorial race like the one in Nevada, which is virtually a dead heat, whether they show up or not will be a decisive factor in the result. According to David Damore, a political science professor at the University of Las Vegas, it is one of the two wild cards that could swing the race. (How many of the state's significant Mormon population turn out for Angle is the other.)

The problem with the ad is that while it is both crude and crass, it identifies a definite disaffection that Latinos have with the Obama administration. The Democrats' inability to introduce immigration reform or pass the Dream Act, which would allow young Latinos to achieve citizenship through military service or college, despite their promise to do so and their super majorities has left many Latinos wary.

"Many of us are novices at the political game, and when a promise is made, you keep your promise," Fernando Romero, the president of Hispanics in Politics, a wing of the Latin Chamber of Commerce, told the Wall Street Journal.

There was an uptick nationally in Latino voter turnout in 2008, but a Pew survey shows they are still far less likely to vote than blacks or whites, and their participation rate remains just under 50%. For reasons more related to economics than ethnicity – Latinos tend to be poorer – they are still far more likely to support the Democrats than Republicans. The trouble is, as a Pew Hispanic survey reveals, they are less motivated to vote.

The Republicans, however, may be able to help them out. For while, with the significant exception of putting the first Latina on the supreme court, the Democrats have given them precious little to specifically vote for, Republicans in some places are giving them plenty to vote against. Ads like the one in Nevada have enraged some in the Latino community, as have anti-immigration rhetoric and racially-charged statements.

Last week, the Tea Party-supported Republican senatorial candidate for Nevada, Sharron Angle, told a group of Latino students: "Some of you look a little more Asian to me." In California, Democratic gubernatorial candidate Jerry Brown held only a narrow lead among Latinos until his opponent Meg Whitman was exposed as having fired her long-term maid, after finding out she was undocumented, effectively nullifying her extensive outreach work to the community. The race had been close; now Brown's lead appears unassailable.

If the perception keeps hardening that Republicans are intrinsically and reflexively hostile to the Latino community, then it could be difficult for the GOP to get them back. In 1994, California's Republican governor backed Proposition 187, which sought to ban public services to undocumented immigrants. That was the year California Republicans lost Latinos for at least a generation and maybe for ever.

This is not just a local problem. According to the census, in five of the eight closest senatorial races (Washington, California, Nevada, Colorado and Illinois), Latinos comprise 10% or more of the population (given their younger profile, though, their share of the elctorate will be lower). In each one of those, they outnumber African Americans in the state.

The centre of political gravity in the US is moving westwards, with states with significant Latino populations like Arizona, New Mexico, Nevada, Colorado, Oregon and Washington increasingly in play during presidential elections. And as it shifts, the Democratic reliance on its African American base – it has only won the presidency without the black vote once, in 1964, since the second world war – must now mature to accommodate a tectonic shift in the electoral alliances which might take it to victory. Even in swing states where the Latino electorate is relatively small – Iowa, Missouri, Ohio, Pennsylvania, Wisconsin, Minnesota and Michigan – two things are certain: the power of Latino voters is sure to grow and, in close races, could be decisive.