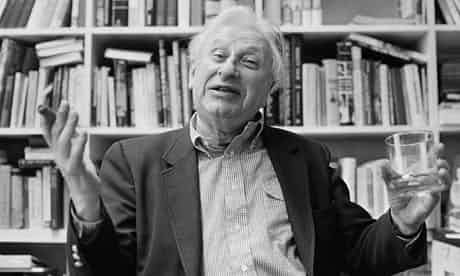 Let me tell you a story
The Guardian,
Photograph: Fred Jewell/AP

About 25 years ago, Studs Terkel was waiting for a number 146 bus alongside two well-groomed business types. "This was before the term yuppie was used," he explains. "But that was what they were. He was in Brooks Brothers and Gucci shoes and carrying the Wall Street Journal under his arm. She was a looker. I mean stunning - Bloomingdales and Neiman Marcus and carrying Vanity Fair."

Terkel, who is 95, has long been a Chicago icon, every bit as accessible and integral to the cultural life of the Windy City as Susan Sontag was to New York. He had shared the bus stop with this couple for several mornings but they had always failed to acknowledge him. "It hurts my ego," he quips. "But this morning the bus was late and I thought, this is my chance." The rest of the story is his.

"I say, 'Labour Day is coming up.' Well, it was the wrong thing to say. He looks toward me with a look of such contempt it's like Noel Coward has just spotted a bug on his collar. He says, 'We despise unions.' I thought, oooooh. The bus is still late. I've got a winner here. Suddenly I'm the ancient mariner and I fix him with my glittering eye. 'How many hours a day do you work?' I ask. He says, 'Eight.' 'How comes you don't work 18 hours a day like your great-great-grandfather did? You know why? Because four guys got hanged in Chicago in 1886 fighting for the eight-hour day ... For you.'

"Well, he was scared and nervous and the bus was still late. I've got this guy pinned up against the mailbox. He couldn't get away. 'How many days a week do you work?' I went on. Well, then the bus came and I never saw them again. But I think that every workday morning she was looking from the 15th floor of their apartment block to see if that mad man was still there."

Studs Terkel can tell a good story. Usually they are other people's stories. As an oral historian, he has won almost every award from the Pulitzer down for recording the lives of working-class Americans for decades. It is both his job and his calling. "I have, after a fashion, been celebrated for having celebrated the lives of the uncelebrated among us," he writes in his latest book, Touch and Go: A Memoir. "For lending voice to the face in the crowd ... My curiosity keeps me going. My epitaph is all set: Curiosity did not kill this cat. I took a vacation once - it involved a beach - and to tell you the truth, I had no idea what to do with myself. It was torture. Work is life. Without it, there is no life."

When I arrive at his home near Lake Michigan, he offers me a whisky and starts asking me about Ken Livingstone and Tony Blair. "Why was he such a house boy for Bush?" he asks, lamenting the passing of the Labour party of Aneurin Bevan and the ascendancy of what he terms "the new baby mandarins". He sits in his red jumper, surrounded by magazines and books on Einstein, Orson Welles, Katharine Hepburn and many others. The titles of the books that have made him such an institution are short and to the point. The Good War (about the second world war), Hard Times (the Great Depression), Working (people's attitudes to work) and Race (Americans' attitude to race). But the stories he tells are extraordinarily long. The one about the exchange at the bus stop took at least 15 minutes, including a few prompts from me ("So what happened at the bus stop?"/ "I'm coming back to that, don't worry.") This is not because he talks slowly, but because confining himself to the standard linear narrative structure - a beginning, middle and an end, and then on to the next tale - is not his style. He is a raconteur. He makes detours to talk about his experiences.

His speaking style owes more to jazz improvisation than classical (very loud jazz improv as he is quite deaf). He goes where the stories take him. And if you're prepared to go with him, it is quite good fun. His book is written just as he speaks - an anecdotal pot-pourri. In conversation, he may mention famous people, such as the late Mahalia Jackson, who was the first gospel singer to perform at the Carnegie Hall and sang at both the March on Washington and John F Kennedy's inauguration. She refused to let a McCarthyite enforcer intimidate Terkel off her radio show at CBS. But he is just as likely to tell stories involving everyday characters he met along the way. Like "one-arm" Charlie, who had no teeth and dipped his toast in milk to make something called "graveyard stew". As an aside, Terkel tells me that Charlie lost his teeth or his arm or both (it was not entirely clear) in the Seattle strike of 1919.

Terkel mentions the strike as though it needs no explanation - I later discover that it was over postwar wage controls - and, if there is a theme to his new book, it is his frustration at America's historical illiteracy. Gore Vidal has branded the US the United States of Amnesia. Terkel characteristically goes one step further, calling it the United States of Alzheimer's. "We forgot what happened yesterday. We know all about Paris Hilton. We know about that. But what do we know about why we are there in Iraq?" At one point in his book, he asks: "Do I have to be 94 years old to remember these names? Are they otherwise erased from history?"

He has certainly witnessed an awful lot of history. Born in 1912 in New York to Russian Jewish parents, he moved to Chicago aged eight, where his parents ran a rooming house that became a transient home to "communists, vegetarians, wobblies [radical trade unionists]". He sat on his father's shoulders on the steps of the New York Public Library to watch the Armistice Day parade in 1918. He studied law but had no interest in practising it. He has been an actor and a union organiser. He still gets excited about the fortunes and fate of Henry Wallace - Roosevelt's progressive vice president in 1945 - as though it were only yesterday.

In the early days of television, he had his own show, Stud's Place, which was like Cheers without the booze. He was later blacklisted for having signed numerous leftwing petitions. "Don't you know communists are behind this?" he was asked. "And if the communists are against cancer does that mean we have to be for cancer?" he replied. He owes his survival through those rough times in no small part to Chicago and its working-class culture. "If I was in New York or Los Angeles, I would have been dead meat," he says. "That's why I love Chicago - it has always been and still is the City of Hands. Horny, calloused hands."

He went into radio, hosting The Studs Terkel Program, which ran for 45 years and showcased his diverse and idiosyncratic taste in music, from Bob Dylan to Alexander Frey, Louis Armstrong to Woodie Guthrie. In the meantime came the books, in which he turned on the tape recorder and gave a voice to the voiceless. If you have lived that much history as actively as he has, it is hardly surprising (even if it is a little curmudgeonly) that you might get impatient with people who think of Truman's election campaign as the distant past.

But Terkel is not living in the past. He follows the news closely and reads constantly. Like most Chicagoans, he's backing Obama in the Democratic primaries. However, like everyone else, he has his blind spots. At a New York dinner party for Dennis Kucinich, the left-wing Democratic presidential hopeful four years ago, Terkel rose to make a toast. "I didn't know who Kucinich was until a few months ago," he confessed. "But then I didn't know who Britney Spears was until a few months ago either".

follow on twitter
RT @MCRSociology: Gary Younge discusses identity politics and America with Will Hutton in this episode of @thewesocietypod https://t.co/72…
RT @mart_welton: Congratulations to all those getting their A-level results today. If you have BBB at A-level or above you can still apply…
RT @BernardineEvari: Please follow the groundbreaking online #MuseumofColour UK, founded by the unstoppable Samenua Sesher. The 1st gallery…
RT @EthnicityUK: Gary Younge is interviewed by @sonikkalogan about his work on racism and gun violence in @the_hindu #DataPoint podcast. h…
RT @thefreedomi: 🚨 NEW: Saudi women’s rights activist & academic Salma al-Shehab was sentenced to 34 years in prison + 34 year travel ban f…
RT @LRB: #DawnFosterForever! On Thursday 15 September at the @LRBbookshop, @BizK1, @piercepenniless, Lynsey Hanley and @garyyounge will d…
RT @ShowunmiV: This is how we support Black women and girls https://t.co/8YmgV21zHo
RT @sonikkalogan: It's #DataPoint Pod Thursday! In this week's episode, I talk to @noraneus, @garyyounge and @Casey_J_Wooten about the U.S.…
RT @bgnoiseuk: Next month, @LRBbookshop will host an event to celebrate the life and work of Dawn Foster with @BizK1, @piercepenniless, Lyn…
Help me Twitter. The quote: ""You can cut all the flowers but you cannot keep Spring from coming." is most commonly… https://t.co/Xs7JkiOEd5
© Gary Younge. All Rights reserved, site built with tlc
Where can i buy stendra online Can u buy atacand over the counter Best place to buy stendra online How to get patanol online Caduet online usa Online doctor geodon Where to buy cellcept Nasonex and flonase together Social anxiety disorder celexa Where can i buy caduet