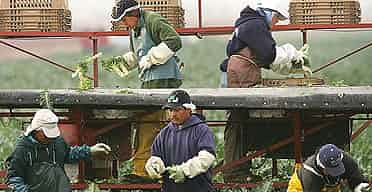 A quarter of a century later came the claim that General Andrew Jackson was the offspring of a union between a "common prostitute and a mulatto man". Eight years later came the "issue" of vice-presidential candidate, Colonel M Johnson's black slave mistress - Julia Chinn - nearly derailed the ticket with Martin Van Buren.

Throughout this era, miscegenation was a scandal for the simple reason that more obvious scandal of slavery, and all that went with it, dared not speak its name. White men regularly slept with their slaves - usually by force. (A century later, during a gubernatorial campaign in Alabama, Jim Folsom chided white people for their defence of segregation given that there was "a whole lot of integratin' goin' on at night.")

Such an admission would of course have undercut the very artifice on which slavery was built - that black people were not human and therefore did not suffer as like whites - and so was conveniently ignored. The issue was not doing it but getting caught.

Almost two centuries later and presidential politics is trapped in the same hypocritical space. Only this time, the faultline is not miscegenation but immigration. Politically, the right has decided that there is nothing too outrageous that you can say about immigrants, particularly those who are undocumented.

But economically America is dependent on undocumented labour. So the challenge for the candidates is to avoid the unavoidable. To exercise their considerable wealth in a way that does not directly exploit undocumented migrants or to be able to claim plausible deniability if they are caught.

Having lobbed considerable stones at Rudy Giuliani over immigration at a debate in Florida last week, Mitt Romney was soon embarrassed to discover that he lived in a glass mansion.

Following up on a question from a YouTube participant that accused Giuliani of running a sanctuary city, Romney added that Giuliani believed "if you happen to be in this country in an undocumented status, and that means you're here illegally, then we welcome you here. We want you here. We'll protect you here. That's the wrong attitude," he said.

Giuliani branded Romney as "holier than thou".

"Mitt usually criticises people when he usually has the far worse record," he said. In Massachusetts "there was even a sanctuary mansion. At his own home, illegal immigrants were being employed".

Giuliani was referring to a story last year that a landscaping company working on Romney's mansion was using undocumented Guatemalan labourers. Romney claims he gave the firm a second chance to purge its staff of those whose papers were not in order. But when Boston Globe reporters went back the day after his altercation with Giuliani, undocumented labourers were still there.

Four lessons can be learned from this. The first is that Romney is an idiot. Having been burned once so publicly he could have just stayed away from the issue rather than throwing red meat to the xenophobes. As Tom Tancredo has discovered, the constituency for this kind of immigrant baiting is vocal but not that large.

Moreover, whoever wins will have to address the decline in Hispanic support for the Republicans - the erosion of a key base in Karl Rove's coalition that elected President Bush.

Second, that despite the fact that voters never rank it higher than fifth on their list of electoral priorities, there seems to be no depths to which demagoguery might sink on this issue. At a National Public Radio debate in Iowa, the candidates were asked whether, American citizens should turn in someone they know to be an illegal immigrant. This kind of baiting will get worse as the campaign intensifies.

Third, that this race to the bottom is by no means inevitable. In both parties some candidates have refused to stoop to racially-charged invective.

"We must recognise these are God's children as well," said John McCain at the YouTube debate. "They need our love and compassion, and I want to ensure that I will enforce the borders first. But we won't demagogue it."

Charged with allowing the children of undocumented workers to apply for college scholarships, Mike Huckabee responded. "We are a better country than to punish children for what their parents did."

Unlike Europe, which imagines itself as an ethnically pure continent to which immigrants come, America covets the power of the migratory narrative. The trouble is while Americans have always embraced immigration, they have long had a problem with immigrants. The ethnicity, race and religion of the immigrants may change over time - but the fact that they are perceived by some as a problem does not.

On the Democratic side there was more consensus. In response to NPR's question, Denis Kucinich replied "We don't encourage vigilantism in this country." And Hilary Clinton replied. "What we're looking at here is 12 to 14 million people - they live in our neighbouroods, they take care of our elderly, they probably made the beds in the hotels that some of us stayed in last night. They are embedded in our society."

Which brings us on to the fourth point. That every candidate will have bennefitted, directly or indirectly, from the work of an undocumented labourer. There is no way they could not have. If they eat out, get home delivery, shop, stay in hotels, eat fresh fruit and vegetables or have help around the house they will have dealt with them.

Like the mixed-race relationships of yore, illegal immigrants today are the open scandal that can both not be admitted in politics and cannot be denied in everyday life. The confected outrage that defies common sense.