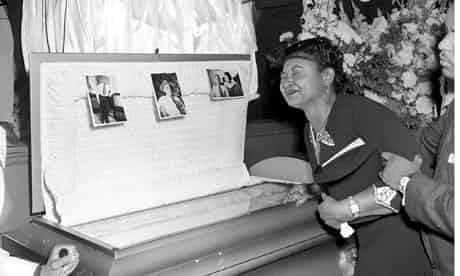 In 1955 Mamie Till sent her 14-year-old son, Emmett, from Chicago to rural Mississippi to spend his summer holiday with family. As she packed him off she gave him some advice about how a black youth should conduct himself in the pre-civil rights south. "If you have to get on your knees and bow when a white person goes past," she told him. "Do it willingly."

While in the small town of Money, in the delta region, he either said "Bye, baby" or wolf-whistled at a white woman in a grocery store. Three days later his body was fished out of the Tallahatchie river with a bullet in his skull, an eye gouged out and his forehead crushed on one side.

An all-white jury acquitted two men after just 67 minutes' deliberation. "If we hadn't stopped to drink pop," said one juror, "it wouldn't have taken that long." The case became a metaphor for the depths of southern bigotry and a galvanising emblem for those who sought to rectify it. It was the subject of Toni Morrison's first play, a poem by Langston Hughes and a song by Bob Dylan. Just three months later, when Rosa Parks refused to give up her seat in Montgomery, Alabama, she said Emmett Till was on her mind.

The following year the men confessed the crime to a magazine for money. It turns out Mamie had raised Emmett with too much self-worth to follow her own advice. The lynchers said they only wanted to scare him but when he refused to beg for mercy they "had" to kill him.

Travelling across the Atlantic over the last fortnight, I've heard black parents on both sides revisiting the same conversation with their kids, particularly boys, about how to conduct themselves in moments of racial duress.

Not a conversation about the fact that racism exists. By the time that they are ready for that talk, the reality will already be apparent even if its dynamics remain obscure. At least twice a week, during the 10-minute walk to and from my son's daycare in a mixed-income, racially mixed area of Chicago, we see young black men (and only them) being arrested or frisked. I don't have to say a thing. Nor do I have a thing to say.

But a conversation about the fact that racism has consequences and, depending on how you handle it, those consequences could be serious and even deadly – that's different. A chat that tempers all the emphasis on self-confidence and self-respect with a cautionary word about self-preservation. That while they should never accept unequal treatment they may, in certain moments, have to acknowledge and endure it for what it is as the price to pay for staying alive. That we do not want to raise metaphors, emblems or teachable moments for premature burial, but children who grow into adults. That there is little to be gained by trying to reason with the raw power of the state. Just remember the badge number lest you be forgotten as a statistic.

As the African-American essayist James Baldwin wrote of his engagements with police officers: "He may be a very nice man. But I haven't got the time to figure that out. All I know is, he's got a uniform and a gun and I have to relate to him that way. That's the only way to relate to him because one of us may have to die."

In the US, these conversations have been prompted by the murder of Trayvon Martin, the black 17-year-old carrying a packet of Skittles and a can of iced tea shot dead by a vigilante in a gated community in Florida carrying a handgun. The vigilante says he "reasonably believed" his life was in danger and has not been arrested, let alone charged.

In Britain, they have been triggered by a slew of racism charges levelled at the police. One includes a recording of a policeman telling a suspect that he strangled him "'cos you're a cunt", and then telling him: "The problem with you is you will always be a nigger."

When initially presented with the evidence, the Crown Prosecution Service said charges should not be brought because the remarks did not cause the man harassment, distress or alarm. They have now agreed to review that decision. Another involved a 15-year-old who claims he was strangled, kicked, dragged across the floor and kneed in the back after he presented himself at a police station as requested. His alleged uniformed assailant aggressively stopped and searched him a few days earlier. The accusations that brought both young men into contact with the police in the first place have been dropped.

These incidents resonate precisely because they are part of a pattern so intimately woven into our societal expectations that they have ceased to be remarkable. It is not the work of individuals. Three weeks ago, Rekia Boyd, 22 and unarmed, was shot dead in the street in Chicago by an off-duty detective who was overheard the day before saying: "What do I have to do around here to get some peace, quiet and respect? Shoot someone?" Black people in England and Wales are 30 times more likely than white people to be stopped and searched, even though less than 0.5% of those searches lead to an arrest for possession of a dangerous weapon.

Nor are these people simply going rogue. All these perpetrators were reported to the authorities and – in the absence of massive public pressure and media exposure – all were cleared. Both systemic and systematic, the racism these incidents and statistics reveal is embedded within the judicial system itself, rendering it part of the problem rather than the solution. This goes beyond the parental to the political. For it is difficult to escape the conclusion that the state, as currently imagined and experienced, is simply not set up with the purpose of protecting the rights of black people – indeed quite the opposite. It seems to function with the specific intent of violating their rights.

"The law," wrote Baldwin, "is meant to be my servant and not my master, still less my torturer and my murderer." More than half a century later, Mamie Till's advice still stings with the brutal honesty of a mother's love. That a full 19 years after Stephen Lawrence's murder and 13 since the Macpherson report, the Metropolitan police still announces itself committed to pulling racism out by the roots makes you wonder how deep these roots are – and how hard they are really pulling.

follow on twitter
RT @nytimes: A Black professor who studies housing discrimination had his house appraised: $472,000. He then did a “whitewashing experiment…
RT @MCRSociology: Gary Younge discusses identity politics and America with Will Hutton in this episode of @thewesocietypod https://t.co/72…
RT @mart_welton: Congratulations to all those getting their A-level results today. If you have BBB at A-level or above you can still apply…
RT @BernardineEvari: Please follow the groundbreaking online #MuseumofColour UK, founded by the unstoppable Samenua Sesher. The 1st gallery…
RT @EthnicityUK: Gary Younge is interviewed by @sonikkalogan about his work on racism and gun violence in @the_hindu #DataPoint podcast. h…
RT @thefreedomi: 🚨 NEW: Saudi women’s rights activist & academic Salma al-Shehab was sentenced to 34 years in prison + 34 year travel ban f…
RT @LRB: #DawnFosterForever! On Thursday 15 September at the @LRBbookshop, @BizK1, @piercepenniless, Lynsey Hanley and @garyyounge will d…
RT @ShowunmiV: This is how we support Black women and girls https://t.co/8YmgV21zHo
RT @sonikkalogan: It's #DataPoint Pod Thursday! In this week's episode, I talk to @noraneus, @garyyounge and @Casey_J_Wooten about the U.S.…
RT @bgnoiseuk: Next month, @LRBbookshop will host an event to celebrate the life and work of Dawn Foster with @BizK1, @piercepenniless, Lyn…
© Gary Younge. All Rights reserved, site built with tlc
Tetracycline online kaufen What do i need to buy lotrisone Can you take spiriva and albuterol together Pradaxa 15 0mg capsule price Generic flomax prices Get arava online Can you get nitrostat over the counter Can you take tylenol and imitrex together Get pamelor online Amlodipine and doxazosin taken together