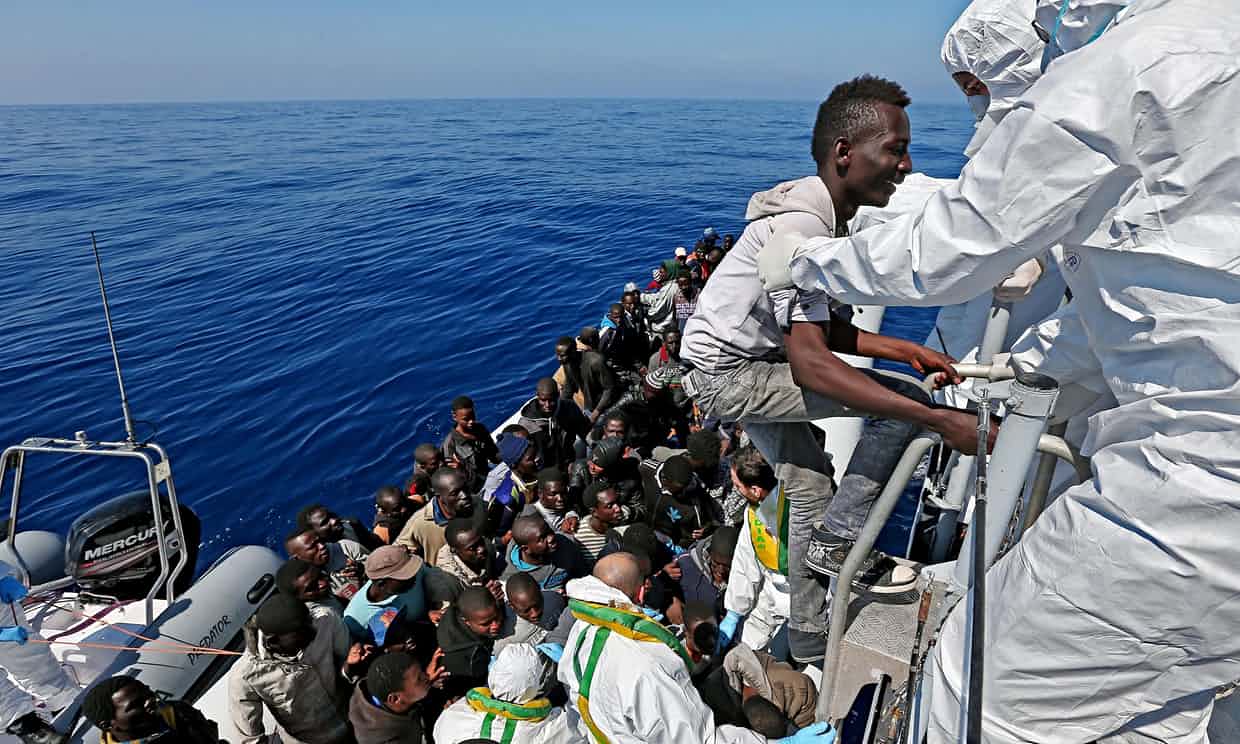 Mediterranean migrants: No one makes this journey just to pick up benefits
The Guardian,
Photograph: Alessandro Di Meo/EPA

While travelling up the US-Mexican border several years ago, I met an anti-immigration campaigner in Columbus, New Mexico who went by the name of Quasimodo and who had carried a .38 pistol around with him ever since he went into an abandoned house and found some Latinos there.

“I looked around and there were 12 guys just 10ft away looking at me,” he explained.

“Did they look as if they might attack you?” “No.”

“Has an illegal immigrant ever attacked you?” “No. But they could have had my fanny if they wanted it.”

They weren’t interested in his fanny (American for behind). They had more basic needs. As we wandered the cactus-studded desert around his house we saw bottles of water hung on trees that pro-immigration campaigners had put out for the migrants who’d made it that far.

“I know they think they’re doing a good thing,” Quasimodo explained. “But they’re really just encouraging people to make this dangerous journey and put their lives at risk.”

And so it was that, in order to satisfy a baseless fear, Quasimodo created a rationale where depriving the thirsty of water was in their own interests.

It would be comforting to blame [the anti-immigration culture] solely on Tory policy. It would also be dishonest

The British government’s response to the boatloads of refugees trying to make it across the Mediterranean was driven by the same warped logic. Tory minister Baroness Anelay’s claim last year that supporting search and rescue missions for sinking vessels was a “‘pull factor’, encouraging more migrants to attempt the dangerous sea crossing”, convinced others in the European Union. Sure enough, when they stopped trying to save drowning people, they drowned. It took that very predictable, horrific fact to actually occur – more than 1,000 people have died in the Mediterranean over the past fortnight – to force a panicked reverse in EU policy.

It would be comforting, in an election season, to blame this solely on Tory policy. It would also be dishonest. The reason the Tories thought they could get away with pushing such a heinous plan is because they felt there would be no electoral price to pay for beating up on foreigners. Labour, with its “Controls on immigration” mug, has wilfully contributed to a political culture whereby immigration is understood not as an enriching opportunity but a sickness of which migrants are the most obvious symptom. Generally speaking, the opposition has not challenged the prevailing misconceptions but pandered to them.

What drives these fears is not difficult to fathom. Throughout Europe, xenophobic and racist parties shape the agenda, preying on people’s ignorance and fear. According to Ipsos/Mori, Brits and Spaniards believe they have twice as many immigrants in their country as there actually are; in Italy, Belgium and France it’s closer to three times; in Hungary it’s eight times; in Poland, more than 30. No wonder they’re freaked out.

The truth is, the facts on immigration don’t fit easily on a mug, whereas the politics of xenophobia can be condensed into a single sentence. “They’re coming here to get what’s yours.” This is, of course, a lie, stemming from a system in which borders reflexively open for capital and close for people.

In so far as last week’s shift – a return to search and rescue missions and more funding for patrols – will save more lives in the short term, it is welcome. The EU, the foundations of which emerged from the second world war, was rooted in the desire to prevent inhumanity ever again blighting the continent. Leaving poor people to die on its shores in the hope it will discourage more poor people from coming hardly qualifies for the social democratic ideals of its architects.

But such a plan is also clearly inadequate for anything other than the shortest of terms. It seeks not to cure the problem but to placate the consciences of those who have been most problematic. No substantial immigration policy is possible that does not engage with foreign policy, historical inequity, international trade and environmental calamity.

Around 3 billion people live on less than $2.50 a day. The global 99% did not come about by accident. It’s the result of centuries of colonisation, decades of imperialism and the current corruption that has allowed a handful of people, in different ways at different times, to steal natural resources and pilfer public goods. As Winston Churchill once said of Britain: “This small island [is] dependent for our daily bread on our trade and imperial connections. Cut this away and at least a third of our population must vanish speedily from the face of the earth.”

In more recent times these inequalities have been reinforced by a global trade system that operates according to the golden rule – that those who have the gold make the rules. Put bluntly, Europe is rich (even if those riches aren’t evenly divided) in no small part because other nations are poor.

On top of that, a large number of these people are displaced by wars. The top three nations from which maritime refugees to the EU come are Syria, Afghanistan and Eritrea. The country where they are most likely to start their journey is Libya, which is now effectively a failed state. In other words, many are running for their lives through countries we have bombed. Those in the west who insist we cannot take in “the world’s misery” must, at the very least, acknowledge how much of that misery we are responsible for.

This is not a question of guilt, but responsibility. Many need to come here precisely because we insisted on going there.

That is not the whole story. As my exchange with Quasimodo illustrates, this is not a solely European issue. Indeed, it’s not even just a western issue. The countries bearing the heaviest challenges with refugees are poor, developing world nations such as Pakistan, Lebanon and the Democratic Republic of the Congo. And xenophobia is not a preserve of wealthy, white nations. South Africa is still recovering from an outbreak of anti-immigrant violence that left many dead last week.

Nevertheless, the fundamental issue, as David Wearing points out in his excellent recent article in Open Democracy, is not what is pulling migrants but what pushes them. By the time they have boarded these rickety vessels they have often paid thousands of dollars to be led through the desert. People don’t make that kind of journey so they can come to the west and draw benefits. Their aim is not to capsize and be rescued but to get to the other side.

Herein lies the basic, ugly folly behind so many short-term immigration policies throughout the developed world. If you build a 10ft fence to keep out people who are hungry, they will build an 11ft ladder to climb over it. If you weaponise a fortress to repel people who fear hunger or war, they will seek ever more desperate ways to penetrate it. They have no choice. They are fighting for their lives. And we should support them.

follow on twitter
RT @BernardineEvari: Please follow the groundbreaking online #MuseumofColour UK, founded by the unstoppable Samenua Sesher. The 1st gallery…
RT @EthnicityUK: Gary Younge is interviewed by @sonikkalogan about his work on racism and gun violence in @the_hindu #DataPoint podcast. h…
RT @thefreedomi: 🚨 NEW: Saudi women’s rights activist & academic Salma al-Shehab was sentenced to 34 years in prison + 34 year travel ban f…
RT @LRB: #DawnFosterForever! On Thursday 15 September at the @LRBbookshop, @BizK1, @piercepenniless, Lynsey Hanley and @garyyounge will d…
RT @ShowunmiV: This is how we support Black women and girls https://t.co/8YmgV21zHo
RT @sonikkalogan: It's #DataPoint Pod Thursday! In this week's episode, I talk to @noraneus, @garyyounge and @Casey_J_Wooten about the U.S.…
RT @bgnoiseuk: Next month, @LRBbookshop will host an event to celebrate the life and work of Dawn Foster with @BizK1, @piercepenniless, Lyn…
Help me Twitter. The quote: ""You can cut all the flowers but you cannot keep Spring from coming." is most commonly… https://t.co/Xs7JkiOEd5
RT @the_hindu: #DataPoint | This Thursday, @sonikkalogan takes a look at the #US gun violence epidemic, as mass shootings continue to grow…
City workers get double-digit wage rises while lowest-paid see 1% increase - “Them’s the breaks” https://t.co/XeVyG72iA5
© Gary Younge. All Rights reserved, site built with tlc
Nasonex and flonase together Online doctor geodon Renagel online in india Apple cider vinegar and metformin together Low price glucotrol Where to buy carafate Buy generic tricor Cost of cialis at cvs Onglyza 5 mg tablet price Avelox price walmart