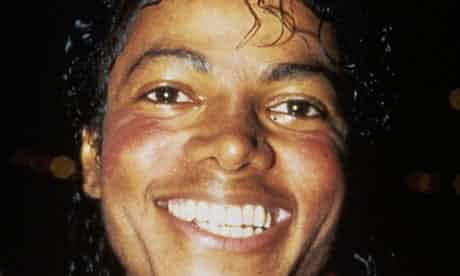 Michael Jackson: We span, shuffled and combed our hair up high – to be like the boy on Bandstand
The Guardian,
Photograph: Rex Features

As dusk fell on Brooklyn on Thursday evening the car windows stayed open so that Michael Jackson could provide the ­soundtrack to the end of a rare sunny day.

You can say what you like about ­Jackson – and people often did – but it was rare that they said it while his music was playing because they were too busy singing along. And so it was yesterday that Brooklyn hummed into nightfall in a state of shock and nostalgia.

There are only three topics that ­middle-class black couples have when they go out to dinner, Chris Rock once joked: complaining about rap music, wondering why blacks cannot be as ­successful as Jews, and Michael Jackson.

"I admit it's weird, but it doesn't mean he's guilty," says one of the characters in Rock's film I Think I Love My Wife.

"All comedians should send Michael Jackson a cheque," Rock once argued. "You know, if you give your agent $10, Michael should get $3."

Such has been the ambivalent ­relationship between Black America and Michael Jackson. A consistent heartfelt appreciation for his music that has long been tempered by a mixture of disdain and disbelief at the how his childhood facial features changed as he got older even as his childlike behaviour did not.

"Many ridiculed him," said the New York-based activist, the Reverend Al Sharpton yesterday. "It's amazing to see how many people are now praising him that wouldn't go near him in the last several years, and condemned him. In our last conversation a couple of months ago, when I was teasing him I was coming to England to see him perform again, he talked about how many people had let him down. I told him it didn't matter, he had never let the fans down."

Jackson rose to prominence in the 1970s – the first black superstar of the post civil-rights era. Born just four years after segregation was outlawed, he signed for Motown in 1968 – the year Martin Luther King was assassinated and Detroit burned to the ground. As such, he straddled the boundaries of what was legal and what was possible – an ­artist with the potential to crossover in a country struggling with its potential to integrate.

"That was a special time," Chaka Khan once told me, referring to the early 70s. "We were all hopeful and everybody seemed to be getting along in a way that they never did before. There was this wonderful feeling about being alive and there was hope that we could make a difference. Those kind of times will probably never happen again."

Jackson was never politically ­associated with these developments, but among many black people his ­cultural ascendancy was understood to be an integral product of them. A little black boy on American Bandstand and Soul Train with a voice that wouldn't break, dance moves that couldn't fail and an afro that wouldn't threaten. As the first breakthrough black performer to grace the screens of MTV in any ­regular fashion, he continued breaking barriers long after the official word was that there were no barriers left.

This was the Jackson I was raised with. Not just an American pop star but a global icon; not just a individual but part of a family. A black family – the kind you never saw in Britain during the early 70s. A counterpoint to the Osmonds or the Partridge Family that made sense on its own cultural terms. In our living room, my brothers and I would spin and shuffle to dance like him. When we were going out our mother would comb our hair high – until our scalps were on fire – so we could look like them.

Given all of this, the degradation of his physiognomy was, to say the least, troubling. The sleeker nose, the thinner lips, the lighter skin, the higher cheek bones, the straight hair – the shift was so irreversible and emphatic that it was as though the teenager we had wanted to look like had turned into a man who did not want to look like us.

To some extent his transformation provided no great mystery within the black community. Skin-whitening creams and hair-straightening gels have been part of our cosmetic lives for almost as long as dark skin and curly hair have been denigrated. And so long as whiteness has carried a premium, the notion that some black people might actively seek it was no shock either.

"Every year, approximately 12,000 white-skinned Negroes disappear," wrote Walter White, the head of the country's oldest civil rights organization, the NAACP, back at the beginning of the last century. "People whose absence cannot be explained by death or emigration. Nearly every one of the 14 million discernible Negroes in the United States knows at least one member of his race who is 'passing'– the magic word which means that some Negroes can get by as whites. Often these emigrants achieve success in business, the professions, the arts and sciences."

But they are not supposed to ­disappear in full view. The point of passing was to leave your past behind, not bring it with you in the form of videographic ­evidence that blatantly reveals your transgression. The before and after shots of Jackson – the first as a black kid in with a microphone for hair and the second with chipped nose and taut lips grafted on to a pallid visage – looked like he had been the victim of some cruel surgical prank.

He was born black, but he didn't die white. Instead, he took on the ­characteristics of a transracial ­experiment, a combination of attributes that had never before been seen ­collected in one human being. If ever there was a candidate to tick the box "other" on the racial categories of forms, it was Jackson.

It was precisely this sense of "otherness" that blunted any feeling of full-on racial betrayal. Thanks to Bubbles the chimp and the pre-teen sleepovers at the Neverland ranch, Jackson's ­deviations were not purely racial. Sexually, socially and behaviourally he was outside the mainstream. He was not lost to black America, he was just plain lost. And though he just died on Thursday, many black people have long mourned his passing, in more ways than one.

So while his relationship with black America was often strained it was never broken. For reasons more to do with expediency, there were moments when he would hug them close.

In 2002, he rode through Harlem on an open-top bus with ­Sharpton, accusing record companies of ­racism. "The record companies really, really do ­conspire against the artists," Jackson told an audience of 350 at Sharpton's headquarters. "They steal, they cheat, they do ­whatever they can. Especially against the black artists." He then launched a scathing attack on his record label, saying of Sony's chairman, Tommy Mottola: "He's mean, he's a ­racist, and he's very, very, very devilish."

Given the centrality of both black people and racism in the history of the music industry, there will always be an audience for this kind of accusation in Harlem of all places. But somehow it seemed too fortuitous that he had made this discovery shortly after Sony had asked him to pay back tens of millions of dollars that had been spent promoting his new album, ­Invincible, after it had sold just a few million copies.

Almost two years later, with charges of seven counts of child ­molestation hanging over him, he briefly ­disappeared into the bosom of the Nation of Islam, the black Muslim racial-separatist organisation that supports the creation of a separate country for black ­Americans and was founded on the principle that white people are devils – literally born with tails and fur.

As he transitioned from a person of colour to a person of pallor, the only thing that made sense consistently was his music. And while almost everybody now legitimately claims him, not ­everybody has quite the same claim on him.

"We are a people," wrote Alice Walker in her 1979 essay, Zora Neale Hurston: a Cautionary Tale and a ­Partisan View. "A people do not throw their geniuses away. And if they are thrown away, it is our duty as artists and as witnesses for the future to collect them again for the sake of our children and, if necessary, bone by bone."