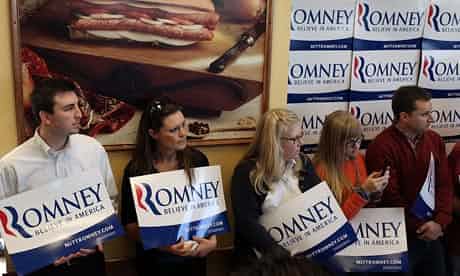 Mitt Romney needs to rediscover the center to have a chance in November
The Guardian,
Photograph: Justin Sullivan/Getty Images

If primaries are a battle between a party's heart and mind, over the last nine months Republicans have proved themselves to be fickle of heart and feeble of mind. Its pragmatists could not produce a candidate with a proven appeal to moderates outside the party. Those wedded to principle failed to settle on a candidate who could make a viable pitch for the conservative mantle. The result is Mitt Romney – a candidate they don't like and they have only belatedly come to accept that they are stuck with.

And so it is that Romney cuts a figure much like Ernest Harrowden in The Picture of Dorian Gray: a character whom Oscar Wilde describes as "one of those middle-aged mediocrities, who have no enemies, but are thoroughly disliked by their friends".

As Jon Stewart pointed out recently, the endorsements themselves tell a story. "We're entering a phase where I think it becomes counterproductive if this drags on much longer," said Congressman Paul Ryan. "So that's why I think we as conservatives need to coalesce behind Mitt Romney."

Florida senator Marco Rubio was also shown saying he'll endorse Romney "because he is going to be the Republican nominee". In the words of Donald Rumsfeld when asked why his troops were rooting around landfill sites for armour: "You go to war with the army you have, not the army you might want or wish to have at a later time."

There are few out there, not being paid to say otherwise, who believe this primary season has not been a disaster for the Republicans.

But as it draws to a close the question is, how much damage has it done? And can that damage be repaired before the presidential election in November?

While it would be easy to heap most of the blame on Romney and leave the rest for Santorum and Gingrich, the reality is most of the damage was done before a single ballot had been cast. The nature of the Republican party these last few years is such that some potential candidates would not enter. Anyone who has said anything sane about climate change, evolution, gay marriage or the economy took a look at what it would take to be nominated and bowed out. Romney stayed in because he was prepared to renounce all the sane things he had done, thereby winning the nomination and losing what integrity he had.

So from the outset Republican voters were unimpressed. Despite the appearance of a closely contested race and a vulnerable Democratic president, turnout was essentially flat or depressed, particularly in swing states, from the beginning. (Although it has picked up of late and is now two percentage points higher than in four years ago in states that can be reasonably compared). Time after time the number who said they had strong reservations about the candidate has topped 40%.

While the primary season did a great job of illustrating this problem, it did not create it. For that we have to thank the conservative binge sparked by Obama's victory and the opportunistic relationship the Republican establishment has had with it. When it came to rallying the faithful against the recession and Obama it worked, until people saw them with power and they had to come up with solutions rather than rhetoric. These primaries are, in no small part, the price the party is paying for its 2010 mid-term success.

The parade of misfits and maladroits who have lead the field – Herman Cain, Michele Bachmann, Rick Perry, Newt Gingrich – have suggested that the party is not serious about putting forward a viable candidate for the presidency. Elevating Rick Santorum as the conservative standard bearer – a rounding error for most of the last year – at the 11th hour only to drop him for Gingrich and then pick him up again, suggests a conservative movement neither quite as resurgent nor quite as impressive as previously thought.

So the primary season has done a lot of damage to Republicans as a group. Then there's Romney. At the end of last year, when the conventional wisdom was that the presidency was Obama's to lose, veteran pollster Charlie Cook argued that as long as the Republican challenger is "colourless and odourless" it would be a referendum on Obama's performance, and the president would struggle. Before the race started the assumption was that Romney was that opponent – a bland businessman with a square jaw and plenty of money. Now he seems like the worst of all worlds. Colourless certainly, but as a candidate he stinks.

The last few months have shown him to be gaffe-prone and introduced him to the wider electorate as effete, out of touch, elitist, stiff and desperate. Some of this he couldn't do anything about. He is who he is, and with more discipline and better marketing he could still leverage that personality into a plausible presidential contender.

But it was his choice to chase Santorum even further down the right-wing rabbit hole. That was a mistake. His refusal to take on the Republican right, to challenge the misogyny, xenophobia and heartlessness, would have cost him nothing in policy terms and earned him a great deal elsewhere. The fact that he has not has cost him dear among three important groups: independents, women and Latinos.

For the whole of last year Romney had a commanding lead among independents and as recently as February was beating Obama by two points. Now he trails Obama by nine points in key swing states. Break those figures down by gender and things are even worse.

Finally we have Latinos, among whom Republicans need to win around a third to have a chance. Once again both the things Romney has said about immigration and the things he has refused to challenge leave him with a steep hill to climb. A Fox poll of Latinos last month gave Obama 70% to Romney's 14% – a whopping 56-point lead.

So can this be turned around? For all the derision about Romney's Etch-A-Sketch strategy – his fortunes could change. American electoral politics is in a very volatile state. Just four months ago the consensus in Washington was that barring a miracle Obama was dead in the water. Romney has a lot of money, and Obama's approval ratings still rarely hit 50.

But to stand a chance Romney will now have to detoxify the Republican image by very publicly taking on his own side before the impression sets in that he'd rather alienate female voters than Rush Limbaugh. He needs a "Sister Souljah" moment that can redefine him before the Democrats do. Given the weakness on his right flank this seems counterintuitive. But his shift to the right has gained him few supporters among conservatives and lost him many among moderates. The trouble is conservatives have nowhere else to go. Moreover their need to hate Obama far exceeds their need to love Romney. If he looks like a potential winner they will flock to him, and he can't win by pandering to them.

follow on twitter
RT @MCRSociology: Gary Younge discusses identity politics and America with Will Hutton in this episode of @thewesocietypod https://t.co/72…
RT @mart_welton: Congratulations to all those getting their A-level results today. If you have BBB at A-level or above you can still apply…
RT @BernardineEvari: Please follow the groundbreaking online #MuseumofColour UK, founded by the unstoppable Samenua Sesher. The 1st gallery…
RT @EthnicityUK: Gary Younge is interviewed by @sonikkalogan about his work on racism and gun violence in @the_hindu #DataPoint podcast. h…
RT @thefreedomi: 🚨 NEW: Saudi women’s rights activist & academic Salma al-Shehab was sentenced to 34 years in prison + 34 year travel ban f…
RT @LRB: #DawnFosterForever! On Thursday 15 September at the @LRBbookshop, @BizK1, @piercepenniless, Lynsey Hanley and @garyyounge will d…
RT @ShowunmiV: This is how we support Black women and girls https://t.co/8YmgV21zHo
RT @sonikkalogan: It's #DataPoint Pod Thursday! In this week's episode, I talk to @noraneus, @garyyounge and @Casey_J_Wooten about the U.S.…
RT @bgnoiseuk: Next month, @LRBbookshop will host an event to celebrate the life and work of Dawn Foster with @BizK1, @piercepenniless, Lyn…
Help me Twitter. The quote: ""You can cut all the flowers but you cannot keep Spring from coming." is most commonly… https://t.co/Xs7JkiOEd5
© Gary Younge. All Rights reserved, site built with tlc
Voltaren street price Geodon sales Cheap generic luzu Buy protonix Where can i buy myambutol over the counter usa Can i buy cellcept Where to buy cheap renagel Can you buy avalide over the counter usa Protonix 4 0mg price walmart Can you buy avapro over the counter