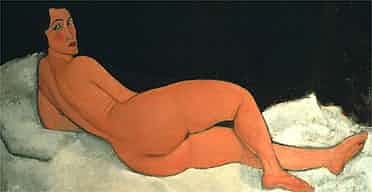 Modigliani sells for £16m
The Guardian,
(On Her Left Side)

The work was one of several in a collection of 19th and 20th century masterpieces owned by casino developer and art collector Stephen A Wynn.

Christie's would not say when he bought the painting or how much he paid for it, but the New York Times quoted experts saying he had paid nearly $10m for the painting in the1980s.

Christie's honorary chairman, Christopher Burge, said the auction was "the best sale of impressionist art I have seen in years".

It also drew a record price for the cubist artist Fernand Léger, whose Woman in Red and Green sold for $22.4m. It had been looted by the Nazis in the second world war and was returned to the heirs of its pre-war owner only recently.