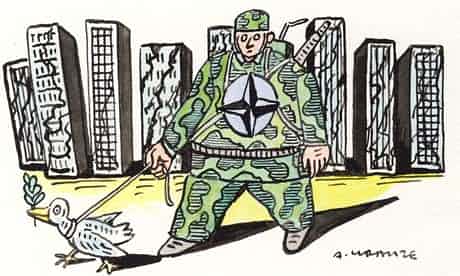 Nato talks security and peace, Chicago has neither
The Guardian,
Illustration: Andrzej Krauze

On Friday morning in Brighton Park, a neighbourhood in southwest Chicago, around half a dozen Latina volunteers in luminous bibs patrolled the streets around Davis Elementary school. The school sits in the crossfire of three gangs; the Kings, the 2/6s and the SDs (Satan's Disciples). The trees and walls nearby are peppered with "tags" denoting territory and mourning fallen gang members. There is a shooting in the area every couple of weeks, explains Mariela Estrada of the Brighton Park Neighbourhood Council, which facilitates the volunteers.

That same evening, just a couple of blocks away, a 14-year-old, Alejandro Jaime, was shot dead while out riding his bike with his 11-year-old friend. According to witnesses, a car knocked them both off their bikes. They picked themselves up and ran. A man got out of the car and shot Alejandro in the back. "Although it's the city's job to provide public safety, we had to respond since our children are in danger and continue to face threats of gang violence," said Nancy Barraza, a Parent Patrol volunteer.

The next morning world leaders started arriving in Chicago for the Nato summit where, just 20 minutes from Brighton Park, they would discuss how to maintain international security. The dissonance between the global pretensions of the summit this weekend and the local realities of Chicago could not be more striking. Nato claims its purpose is to secure peace through security; in much of Chicago neither exists.

When the city mayor Rahm Emanuel brought the summit to Chicago he boasted: "From a city perspective this will be an opportunity to showcase what is great about the greatest city in the greatest country." The alternative "99% tour" of the city, organised by the Grassroots Collaborative that came to Brighton Park, revealed how utterly those who claim to export peace and prosperity abroad have failed to provide it at home.

The murder rate in Chicago in the first three months of this year increased by more than 50% compared with the same period last year, giving it almost twice the murder rate of New York. And the manner in which the city is policed gives many as great a reason to fear those charged with protecting them as the criminals. By the end of July last year police were shooting people at the rate of six a month and killing one person a fortnight.

This violence, be it at the hands of the state or gangs, is both compounded and underpinned by racial and economic disadvantage. The poorer the neighbourhood the more violent, the wealthier the safer. This is no coincidence. Much like the Nato summit – and the G8 summit that preceded it – the system is set up not to spread wealth but to preserve and protect it, not to relieve chaos but to contain and punish it.

Nato is not an impartial arbiter in this state of affairs but the military wing of a political and economic project that makes it possible. Neoliberal globalisation, and the inequities that come with it, cannot exist without force or the threat of it. "The hidden hand of the market will never work without a hidden fist," Thomas Friedman, an ardent advocate of free market globalisation, argued. "McDonald's cannot flourish without McDonnell Douglas, the designer of the F-15. And the hidden fist that keeps the world safe for Silicon Valley's technologies to flourish is called the US Army, Air Force, Navy and Marine Corps."

The paradox inherent in a city like Chicago hosting a summit like this not only lays bare the brutal nature in which these inequalities are maintained at a global level, but it lends us an opportunity to understand how those inequalities are replicated locally.

Chicago illustrates how the developing world is everywhere, not least in the heart of the developed. The mortality rate for black infants in the city is on a par with the West Bank; black life expectancy in Illinois is just below Egypt and just above Uzbekistan. More than a quarter of Chicagoans have no health insurance, one in five black male Chicagoans are unemployed and one in three live in poverty. Latinos do not fare much better. Chicago may be extreme in this regard, but it is by no means unique. While the ethnic composition of poverty may change depending on the country, its dynamics will doubtless be familiar to pretty much all of the G8 participants and most of the Nato delegates too.

The gated communities – like the one in which Trayvon Martin was killed – have been erected on a global scale to protect those fleeing the mayhem wrought by our economic and military policies. This was exemplified last March when a boat with 72 African refugees fled the Nato-led war in Libya. When the boat found itself stranded it sent out a distress signal that was passed on to Nato which had "declared the region a military zone under its control", and then promptly ignored it, as did an Italian ship. The boat bobbed around in the Mediterranean for two weeks. All but nine on board were left to die from starvation, thirst or in storms, including two babies.

"We can talk as much as we want about human rights and the importance of complying with international obligations," said Tineke Strik, the special rapporteur charged with investigating the case. "But if at the same time we just leave people to die – perhaps because we don't know their identity or because they come from Africa – it exposes how meaningless those words are." When Alejandro Jaime's parents hear Emanuel talk about "showcasing the greatest city in the greatest country", they doubtless receive his words with similar disdain.