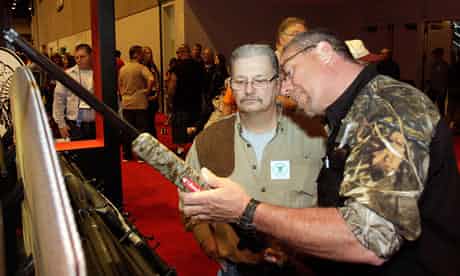 The 5.56 Nato calibre is a semi-automatic that comes in both matte black and pink camouflage. You can use it for hunting pigs and coyote or, naturally, have one in the house just in case. Asked if it wouldn't make more sense to call the police, Patrick Kisgen explains that by the time the police arrived you could be dead. "If someone broke into my house I'd want to get my gun and stand between them and my kids." At a nearby stall a young woman hands out stickers announcing Ambush. "Wear that sticker and twice a day every day we'll be giving out free firearms to someone who's wearing it. You might be lucky," she says.

The cavernous exhibition hall at the National Rifle Association convention hosts a veritable arsenal (none of them are loaded) of lethal weaponry – a supermarket of deadly Glocks, rifles, semi-automatics, Smith and Wessons, bullets and Brownings where people browse and try the killing machine for size. Some are raunchy. One huge poster shows a woman in a bra pointing a pistol towards the sky, and another of Jessica wearing a .22 LR and not much else with an invitation to get a signed poster.

All this firepower comes with considerable swagger. As the organisation's officials proudly boasted in a grassroots organising meeting on Friday morning, the NRA is one of the most succesful lobbying organisations in the country. In a country where eight kids die from guns every day, gun control is not an electoral issue. Some argue they have run out of worthy enemies.

"People, do you think there is a loud public outcry for more guns on school buses?" asked New York Times columnist Gail Collins in a recent article. "I truly believe that this is all the product of a desperate NRA, trying to show its base that there are still lots of new battles to be won."

But if the NRA are victims of their own success they are not the only victims. The ghost of Trayvon Martin haunts this convention. The black teenager, who was killed as he returned home from the store armed only with some skittles and some iced tea, hovers over every claim about self-defence and insistence on responsible usage.

The stand-your-ground law which allowed George Zimmerman to remain free for more than six weeks before finally being taken into custody was crafted by the NRA. On the day registration at the NRA meeting opened, Zimmerman's face peered from the newsstands with the announcement of his arrest. While Chicago congressman Bobby Rush wore a hoody in Congress in solidarity with Trayvon (who was wearing a hoody the night he was killed) the NRA sells custom-made hoodies so you can conceal your weapon in them.

Some express a measure of regret over Trayvon's killing. "It's a tragedy," says one. "It shouldn't have happened. But I think the media has exploited it." Others have none. "He was attacked and he defended himself," claims Samuel Richardson, before going on to say nobody knows all the facts.

In the absence of any serious threat to gun laws, the movement has evoked the spectre of a Barack Obama second term in which he runs amok. Mitt Romney rode that wave at the convention. "In a second term, he [Obama] would be unrestrained by the demands of re-election," Romney told a 6,000-strong crowd. "As he told the Russian president last month when he thought no one else was listening, after a re-election he'll have a lot more, quote, 'flexibility' to do what he wants. I'm not exactly sure what he meant by that, but looking at his first three years, I have a very good idea."

Referring specifically to the right to bear arms, Romney said: "If we are going to safeguard our second amendment, it is time to elect a president who will defend the rights President Obama ignores or minimises. I will."

Romney, has been about as consistent on gun control as he has on abortion. When he ran for governor of Massachusetts he was in favour of quite strict gun controls. Now, after a few trips to Damascus, he is now it. But if he's going to win the presidency he will have to take the NRA crowd with him.

When one convention-goer was asked whether he liked Romney he said. "It looks like I'm going to have to learn to like him, doesn't it?"

follow on twitter
RT @MCRSociology: Gary Younge discusses identity politics and America with Will Hutton in this episode of @thewesocietypod https://t.co/72…
RT @mart_welton: Congratulations to all those getting their A-level results today. If you have BBB at A-level or above you can still apply…
RT @BernardineEvari: Please follow the groundbreaking online #MuseumofColour UK, founded by the unstoppable Samenua Sesher. The 1st gallery…
RT @EthnicityUK: Gary Younge is interviewed by @sonikkalogan about his work on racism and gun violence in @the_hindu #DataPoint podcast. h…
RT @thefreedomi: 🚨 NEW: Saudi women’s rights activist & academic Salma al-Shehab was sentenced to 34 years in prison + 34 year travel ban f…
RT @LRB: #DawnFosterForever! On Thursday 15 September at the @LRBbookshop, @BizK1, @piercepenniless, Lynsey Hanley and @garyyounge will d…
RT @ShowunmiV: This is how we support Black women and girls https://t.co/8YmgV21zHo
RT @sonikkalogan: It's #DataPoint Pod Thursday! In this week's episode, I talk to @noraneus, @garyyounge and @Casey_J_Wooten about the U.S.…
RT @bgnoiseuk: Next month, @LRBbookshop will host an event to celebrate the life and work of Dawn Foster with @BizK1, @piercepenniless, Lyn…
Help me Twitter. The quote: ""You can cut all the flowers but you cannot keep Spring from coming." is most commonly… https://t.co/Xs7JkiOEd5
© Gary Younge. All Rights reserved, site built with tlc
Buy discount vardenafil Cozaar online india Buy viagra online usa Catapres buy Xenical priceline Purchase flagyl Azor online in india Zanaflex pills online Buy amaryl online Can i buy hytrin