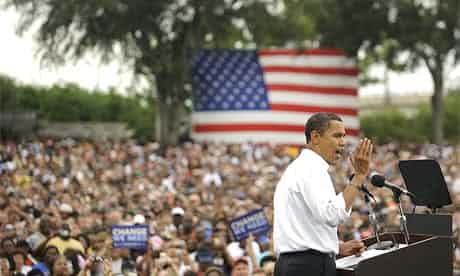 From his office in the former capital of the confederacy, the mayor of Richmond, Doug Wilder, is relishing Virginia's moment in the presidential sun. On that very morning Barack Obama was campaigning in the military town of Norfolk in the south-east of the state while the Republican hopeful, John McCain, appeared with Sarah Palin in front of the biggest crowd he had yet seen in Fairfax, to the north.

Two candidates on the same day in a state not seriously contested for the presidency in 44 years; Wilder, the state's former Democratic governor, does the maths and smiles. "John McCain is here now," he says. "You know why? Because he has to campaign in Virginia. He can't take it for granted."

With its 13 electoral college votes Virginia is a weighty addition to the battleground states - roughly the equivalent of winning New Hampshire, Nevada and New Mexico together. It could not be closer. Of the last six polls both Obama and McCain have led in three each. To the south North Carolina is also shaping up to be a tight race. No Democrat has won there for 32 years and Bush took the state four years ago by 12 points. Obama has 31 offices in the state and the latest poll shows a tie.

"I see a crack in the solid South," says Wilder, the first African American to be elected as a state governor. "I see a crack. And the fissure is taking place right here in Virginia ... to be considered a toss-up state this close to the election is amazing. We might influence North Carolina or Georgia. If we get either one of the states it's big."

So far this fissure has failed to turn into a full-blown chasm. Polls in the summer showed Obama to be competitive in Texas, Mississippi, Georgia and Tennessee while holding narrow leads in South Carolina and Arkansas. Democrats recorded stunning byelection wins in Mississippi and Louisiana, prompting Time to run a cover proclaiming "The End of the South". But predictions of a full-scale remoulding of the region's electoral map have not been borne out. Obama pulled most of his staff and almost all of his advertising from Georgia a few weeks ago. Now he is focusing on North Carolina and Virginia.

The McCain campaign has belittled these efforts as arrogance subsidised by deep pockets. They refused to counter Democrat efforts in Georgia, figuring that if they struggled there then the jig would be up everywhere. They dismiss Obama's campaigning in North Carolina as wishful thinking.

"It's just one more state where the Obama campaign has allowed its hubris to dictate spending decisions," Steve Schmidt, McCain's chief strategist, told the Associated Press. "Soon you will see the Obama camp withdraw from North Carolina like you have seen them withdraw from other states."

For all their affected nonchalance Republicans are spending almost as much money in North Carolina as the Democrats. "North Carolina is teetering on the edge of being a swing state," said Ferrel Guillory, a political scientist at the University of North Carolina. "If the Democrats continue to emphasise it and continue to advertise there they could keep it in play. But keeping it in play just means it's competitive. It doesn't mean they're going to win."

Even this is no mean feat. Obama has poured in considerable resources here, flooding the area with ads, registering young and black voters at unprecedented rates and galvanising volunteers. Within 30 miles of Raleigh yesterday there were seven Obama events, involving canvassing, voter registration and phone banking. Obama was in Charlotte on Sunday; his wife, Michelle, was in the state on Thursday. McCain has not visited the state in months, his campaign has just 13 offices and nothing planned for yesterday. "You just don't see the McCain people anywhere," says Betsy Muse, a frontpage blogger for the liberal site BlueNC and an Obama volunteer.

Back in Richmond volunteers turn up at Broad Rock Library on many a weeknight, to collect campaign materials to go canvassing and registering. Obama has been hoping that this ground game of person-to-person contact will counter the Republican machine. The voter registration drives seem to be paying off. Virginia has seen more than 250,000 more voters registered since January. Most of this rise has taken place in Democratic counties. In North Carolina Democratic registration has leaped 7% while Republicans have risen 1%. The young and the black are over-represented in the increases.

Registering young and black voters is one thing. Getting them to the polls is another. This is one reason why the polls have been particularly unreliable.

Another reason is that it is difficult to know whether all voters are telling the truth. "The Bubba vote is there," former Republican House majority leader Dick Armey told USA Today recently. "And it's very real ... there's an awful lot of people in America, bless their heart, who simply are not emotionally prepared to vote for a black man."

Armey says those voters are "invisible" in the polls because they would not admit they opposed Obama because of his race. "I really want to say it's not going to play a big role," said Muse. "But it is." Given how central race has been to the political realignment in the region it's hard to see how it could not.

Until the 60s the South was the most reliable Democratic area in the country - but Southern Democrats were the most forceful supporters of racial segregation. As the civil rights movement emerged the Republicans sensed an opportunity. In 1961 Barry Goldwater launched the Republican "Southern strategy" in Atlanta. "We're not going to get the Negro vote as a bloc in 1964," he declared, "so we ought to go hunting where the ducks are." The party made an explicit appeal to white racism. When the then Democratic president Lyndon Johnson signed the 1964 civil rights act he said: "We have lost the South for a generation."

"There's not a lot of love for Obama in many of these white Democratic strongholds," said Chris Kromm, the executive director of the Institute for Southern Studies. "I've seen these older, white Hillary supporters say they'll vote for him because he's on their team. But you don't know how many of those McCain is going to be able to pick off."

McCain has problems here, too. While his war record goes down well, many southerners view him as insufficiently pious and charming. During the primaries the guitar-playing former governor-cum-lay preacher Mike Huckabee won five of the 11 former confederate states, although many were held after McCain's victory was assured. At the rally in Fairfax the faithful turned out to see Sarah Palin, the straight-talking evangelical who, even though she hails from Alaska, has gone down better in the South.

"The South doesn't differ much from the rest of the nation on the big issues like war, tax and healthcare," said Guillory. "Where it does differ is in areas of cultural conservatism - like guns, religion and abortion. In a close race that conservatism can make the difference."

But Southern culture is changing. Of the 10 states with the steepest rise in Latino population, six are in the old confederacy. Meanwhile, the South's booming economy has pulled in many outsiders: particularly to the northern-most parts of Virginia and North Carolina's research triangle around the towns of Durham, Raleigh and Chapel Hill.

Obama hopes that if he can add some of these newcomers to his base of young, black and progressive voters he could create a serious upset. That idea is alive in Virginia, dead in Georgia and in intensive care in North Carolina. For now that is good enough for Muse. "We never get this kind of attention. We're hanging on. It's still possible."

· This article was amended on Tuesday September 23 2008. In the headline of the above article we originally referred to Barack Obama's move into the 'conservative deep South'. Virginia, the state mentioned in the piece, is in the South but isn't that deep. This has been corrected.