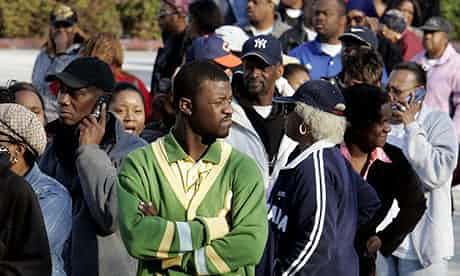 At the President's Lounge bar on Chicago's southside on Monday night all the talk was about 'the wait'. Harold Davis tried to vote early a few days before but after two hours he had to go to work. Z, the barmaid, said she didn't care how long the lines were she would not leave until the deed was done. Her friend, on the other side of the bar, she would give it an hour.

"I'm not waiting no three hours to vote. If they can't get me through in an hour I'm leaving." In the end there was little to worry about.

At the Israel Methodist Community Church, just around the corner, there was a long line when the polls opened at dawn. But within a few hours, voters were in and out in a matter of minutes. Here in the heart of black Chicago, not far from where Democratic presidential hopeful Barack Obama worked as a community organiser, the question wasn't so much who they were going to vote for but whether they thought he would win.

"He's gonna win," said one woman as she left the polling station under a fluttering Stars and Stripes. "I have left it in God's hands and I'm sure he will deliver."

A few miles south in the more mixed suburb of Glenwood it took Davis 40 minutes to get in and out. He usually votes in the evening but had organised with a co-worker to cover for him in the morning and then return the favour in the evening. Davis, an African American, who voted for Obama was not convinced that his vote would be counted. "They stole it before so they can steal it again. I don't know what happens if they do it this time. But I think there'll be trouble."

Confident that Obama would win if the vote were free and fair, Davis looked forward to going back to the President's Lounge last night to celebrate.

A stocky plain-spoken man in his fifties, he said he felt proud and excited to have cast a vote for a black president. "I never thought he would come this far. I really didn't. I think it's great for America. Not just black America. But all of America…."

And then his voice cracked. And then he cried. Walking away to compose himself he came back. "I'm sorry he said. I never knew this thing went so deep."

follow on twitter
RT @MCRSociology: Gary Younge discusses identity politics and America with Will Hutton in this episode of @thewesocietypod https://t.co/72…
RT @mart_welton: Congratulations to all those getting their A-level results today. If you have BBB at A-level or above you can still apply…
RT @BernardineEvari: Please follow the groundbreaking online #MuseumofColour UK, founded by the unstoppable Samenua Sesher. The 1st gallery…
RT @EthnicityUK: Gary Younge is interviewed by @sonikkalogan about his work on racism and gun violence in @the_hindu #DataPoint podcast. h…
RT @thefreedomi: 🚨 NEW: Saudi women’s rights activist & academic Salma al-Shehab was sentenced to 34 years in prison + 34 year travel ban f…
RT @LRB: #DawnFosterForever! On Thursday 15 September at the @LRBbookshop, @BizK1, @piercepenniless, Lynsey Hanley and @garyyounge will d…
RT @ShowunmiV: This is how we support Black women and girls https://t.co/8YmgV21zHo
RT @sonikkalogan: It's #DataPoint Pod Thursday! In this week's episode, I talk to @noraneus, @garyyounge and @Casey_J_Wooten about the U.S.…
RT @bgnoiseuk: Next month, @LRBbookshop will host an event to celebrate the life and work of Dawn Foster with @BizK1, @piercepenniless, Lyn…
Help me Twitter. The quote: ""You can cut all the flowers but you cannot keep Spring from coming." is most commonly… https://t.co/Xs7JkiOEd5
© Gary Younge. All Rights reserved, site built with tlc
Xenical priceline How to get zyloprim in the us Buy azulfidine pill What do i need to buy cellcept Tetracycline online kaufen Purchase flomax Buy keflex pill Mobic 15 mg price What do you need to buy metformin Eldepryl price per pill